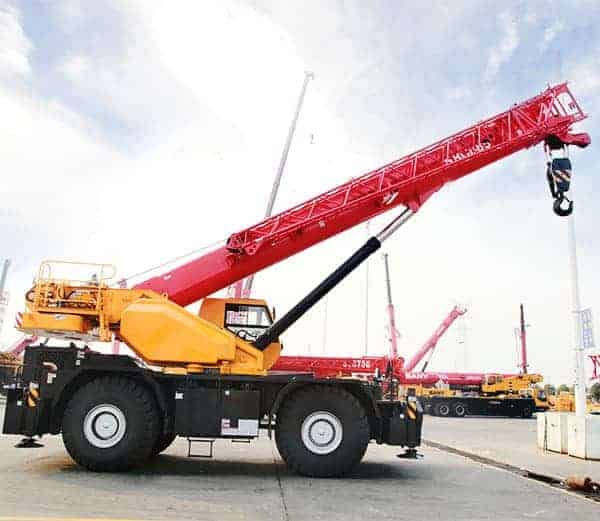 Sany SRC860 is the first US tailored product designed jointly by Sany’s Chinese and American team. The SRC860 has a 60 US tonnes capacity at a 10 feet load radius. It was joined by two more rough terrain cranes, the SRC840 and SRC860XL at 2011 Conexpo. [quads id=3] Georgia Governor Nathan Deal and Human Provincial … Read more

Crane Network. Technical Specifications The CR350Ri features a 32.5 metre six section boom and a three section hydraulically telescopic jib that extends from 6.5 to 14 metres, which can be offset up to 60 degrees. The 35 ton rough terrain crane has a Gross Vehicle Weight of 28 ton and can travel up to 49 … Read more

Photo by Blogdo Guindaste. Terex rolled out its new 110-ton Quadstar 1100 rough terrain crane at Conexpo 2014 in Las Vegas. There was a soft launched in Europe in 2013 and though several has been already sold, it was the first appearance at a trade show, as well as its first appearance in North America. … Read more

Manitowoc has launched a new Grove RT770E rough terrain crane along side with some of their new models like MLC300 and MLC650 crawler crane. The 65 tonne (70 US ton) crane offers the longest boom in its class at 42m (138ft), giving it an extra long reach. The RT770E featured a five-section full-power boom using … Read more