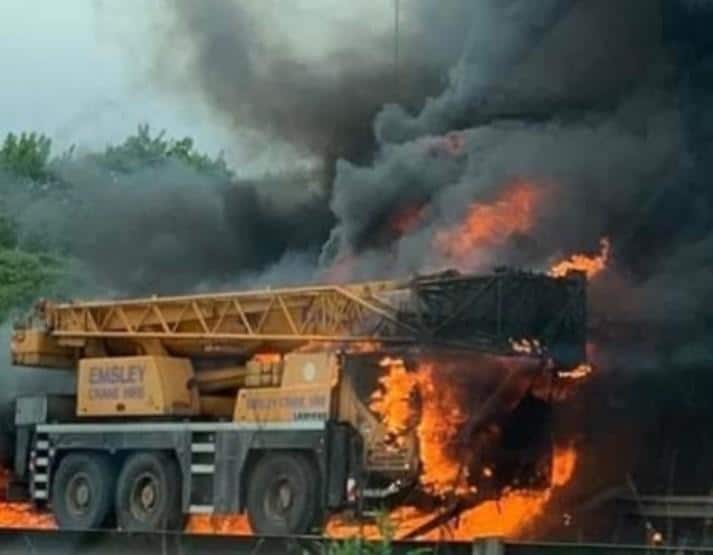 A crane caught fire on 16th May while travelling on the motorway in northern England. The incident, on Monday, involved a three-axle All Terrain crane from the Emsley Crane Hire fleet was nearing junction 26 on the M62 south of Bradford when a fire broke out and the driver pulled over onto the hard shoulder … Read more 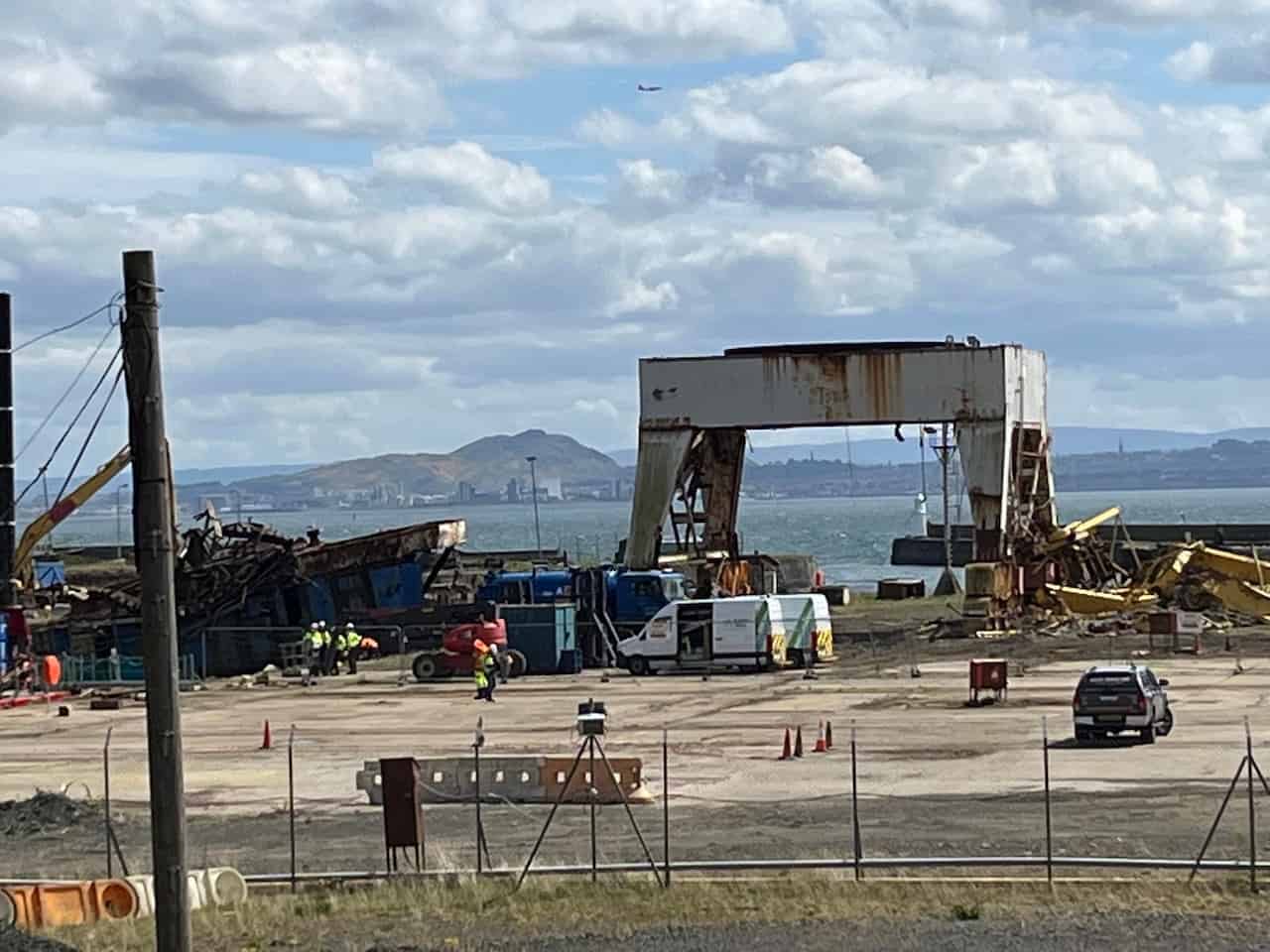 The topside element of the redundant crane – a legacy of the BiFab yard at Burntisland – crashed into the water in the West Dock of the port on 12th May morning. No one was injured as a result of the incident, the owner of the port has since confirmed. One resident said it was … Read more 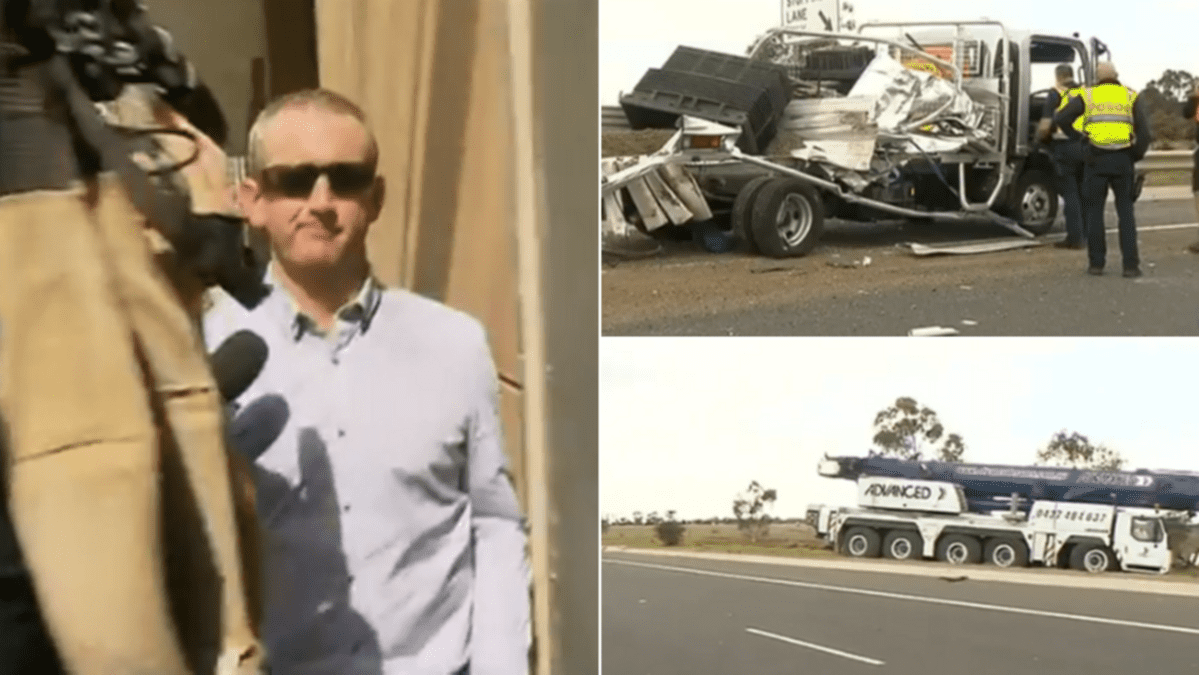 A crane driver who veered into a freeway emergency lane, striking and killing a man, has walked free after a jury found him not guilty of dangerous driving causing death. Joseph Hrin, 34, died after he was hit by a crane driven by Matthew Eccles in September 2018. Mr Hrin and his colleague had stopped in … Read more 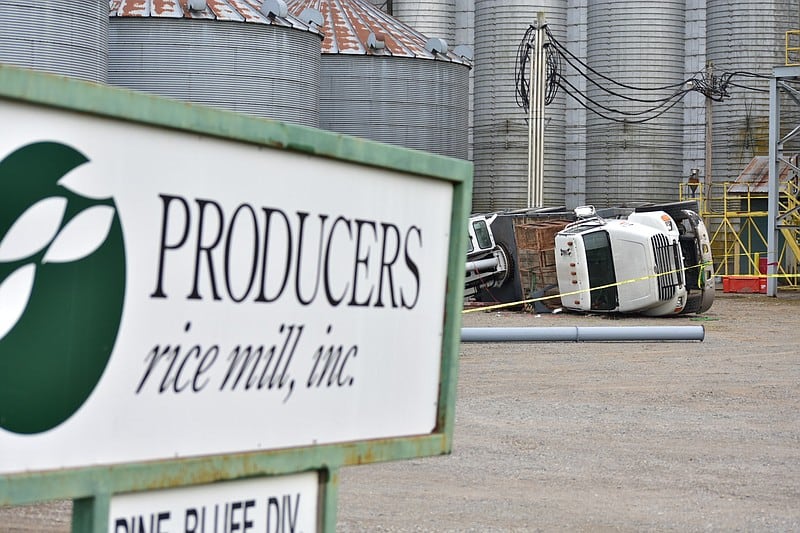 An employee of Producers Rice Mill in Pine Bluff died Tuesday (7th June) after a truck-mounted crane fell over and struck the person, authorities said. The accident occurred at the mill at 121 S. Kansas St. Police said a crew of outside contractors were working with the crane when it fell over. Jefferson County Coroner … Read more 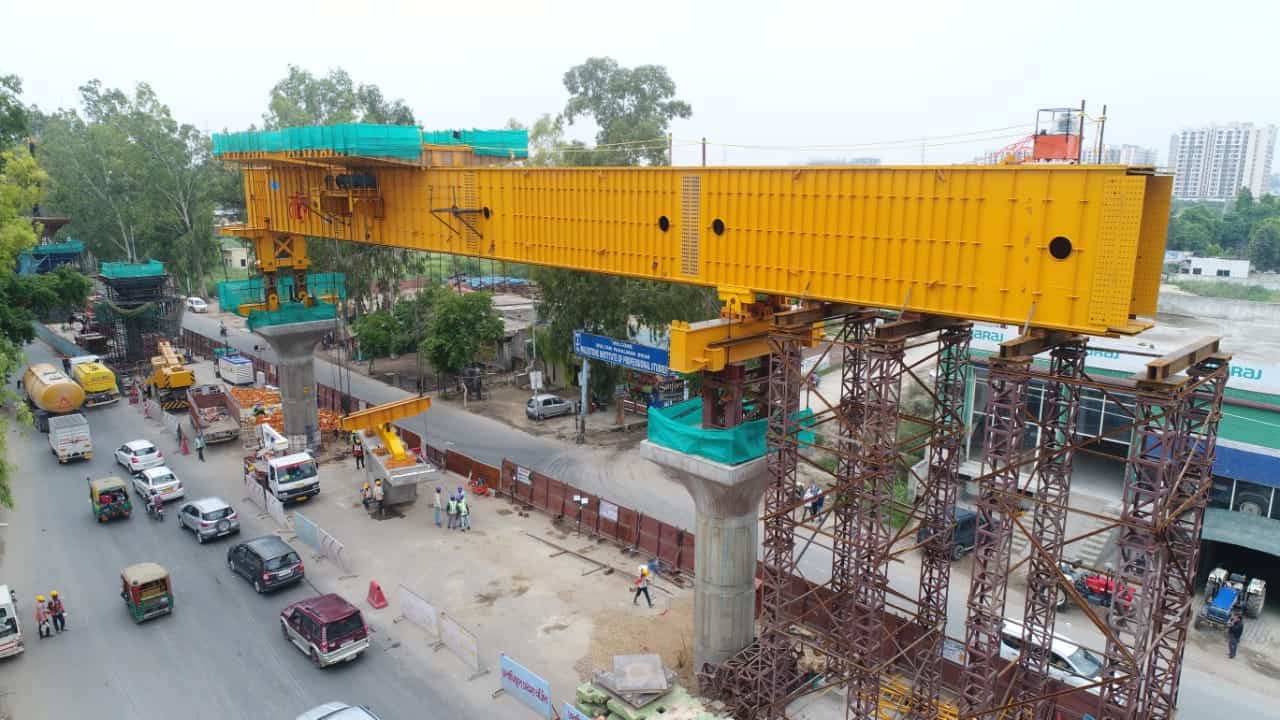 The incident happened on the day when UP Chief Minister Yogi Adityanath visited Meerut and inspected the project site at Bhainsali along with Shri Vinay Kumar Singh, MD, NCRTC and other officials. A 50-tonne concrete slab which was being lifted into place using a launching gantry fell off the under-construction Modinagar site of the Regional … Read more Five persons died and 44 were injured in the accident, which occurred just after midday on Friday (3rd June), as students were returning to their homes in the southern German regions of Baden Wurtemburg and Bavaria ahead of the Pentecost holidays. Four of the deceased are women, while emergency operations had to be performed on … Read more 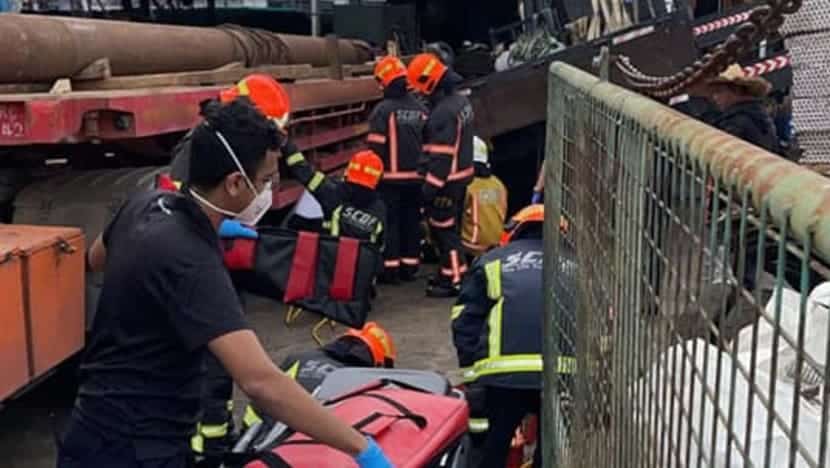 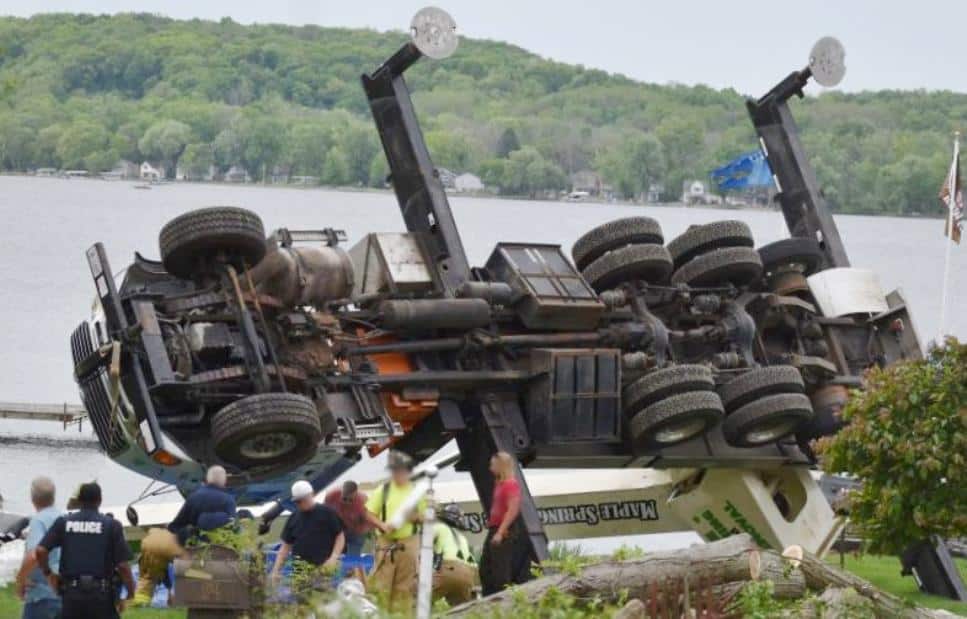 A truck crane/boom truck overturned on 25th May, Wednesday in the town of Lakewood in the southwest corner of New York State. The crane owned by Maple Tree Services was set up on the grass with some timber shoring when it seems one of the outriggers slipped off and plunged into the lawn, causing the … Read more 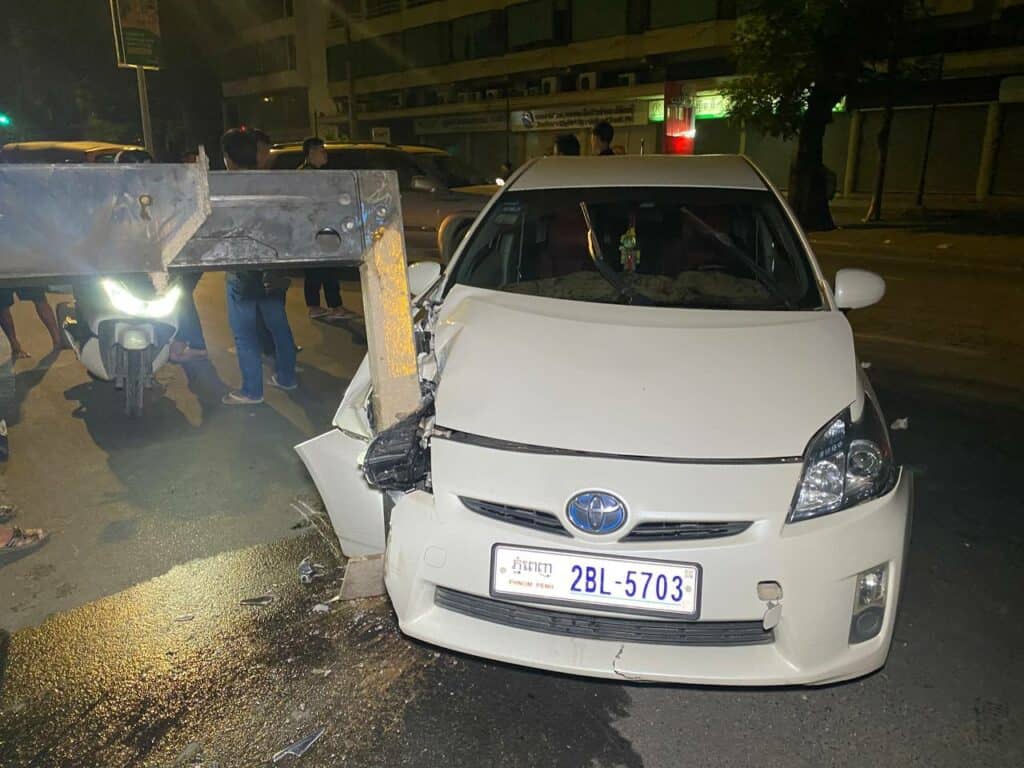 A young driver is fighting for her life in hospital today after smashing into a crane in Phnom Penh early in the morning of 7th May. The accident happened at 2:00 AM on May 7, 2022 along Mao Tse Toung Street in Sangkat Tuol Svay Prey II, Khan Boeung Keng Kang, Phnom Penh. Witnesses say … Read more

Around 4:30 pm on the 7th April, a local resident reported to the fire department that the arm of a cargo truck collided with a pedestrian bridge on the national highway in Mitsuya-cho, Toyohashi City, Aichi Prefecture, Japan. The entire truck has flipped backwards due to the impact. No one was injured in the incident. … Read more

A lifting accident last Thursday (14th April) with one of the world’s largest semi-submersible cranes caused tense moments in Norway as onlookers feared the vessel might be sinking. It involved a couple of cargo barges as well, causing some to capsize. What Has Happened? Saipem 7000 left the Seagreen offshore wind project in Scotland, where … Read more 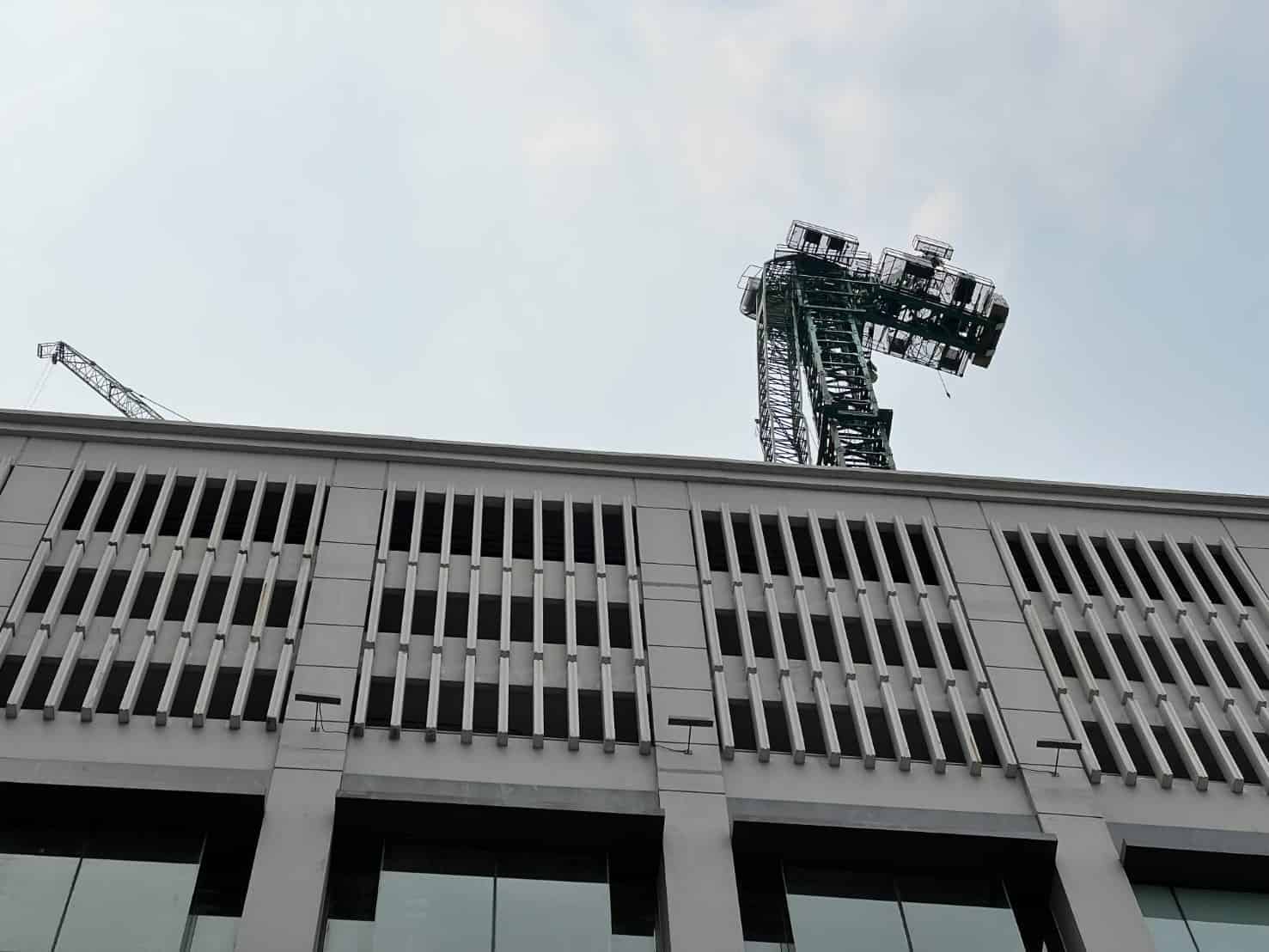 A tower crane’s jib collapsed and fell at a construction site near a shopping mall in downtown Bangkok on Thursday afternoon (7th April), killing one worker and injuring another. The accident occurred at the site of a new hotel, the extended section of The Market Bangkok shopping mall, on Ratchadamri Road in the Lumphini area … Read more 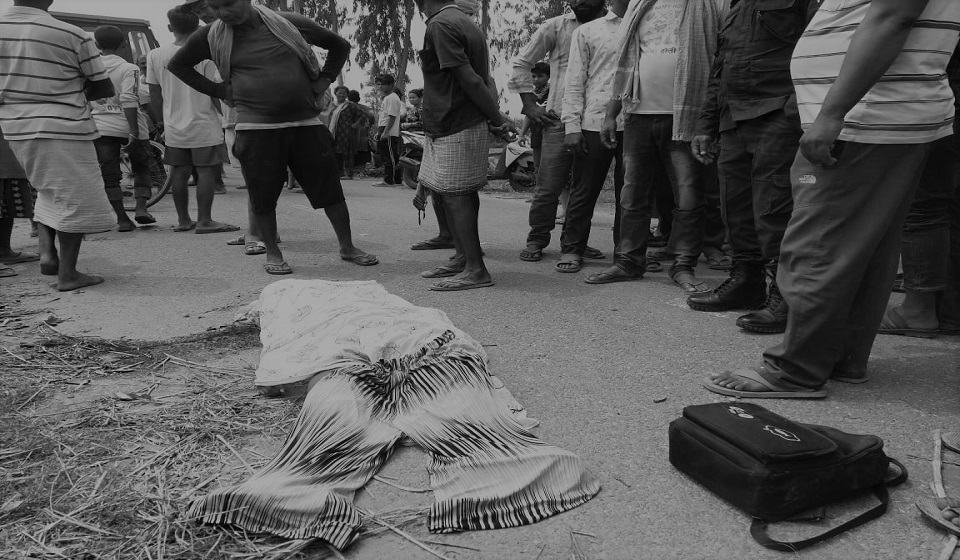 A 17-year-old local student Sumitra Pariyar was killed after being hit by a crane at Nemichok of Rajghat in Bagmati Municipality-7 in Sarlahi, Nepal on Thursday (31st March). According to the police, Pariyar, who was headed for Nawa Jagaran Secondary School, was killed on the spot when the crane coming from the opposite direction hit … Read more 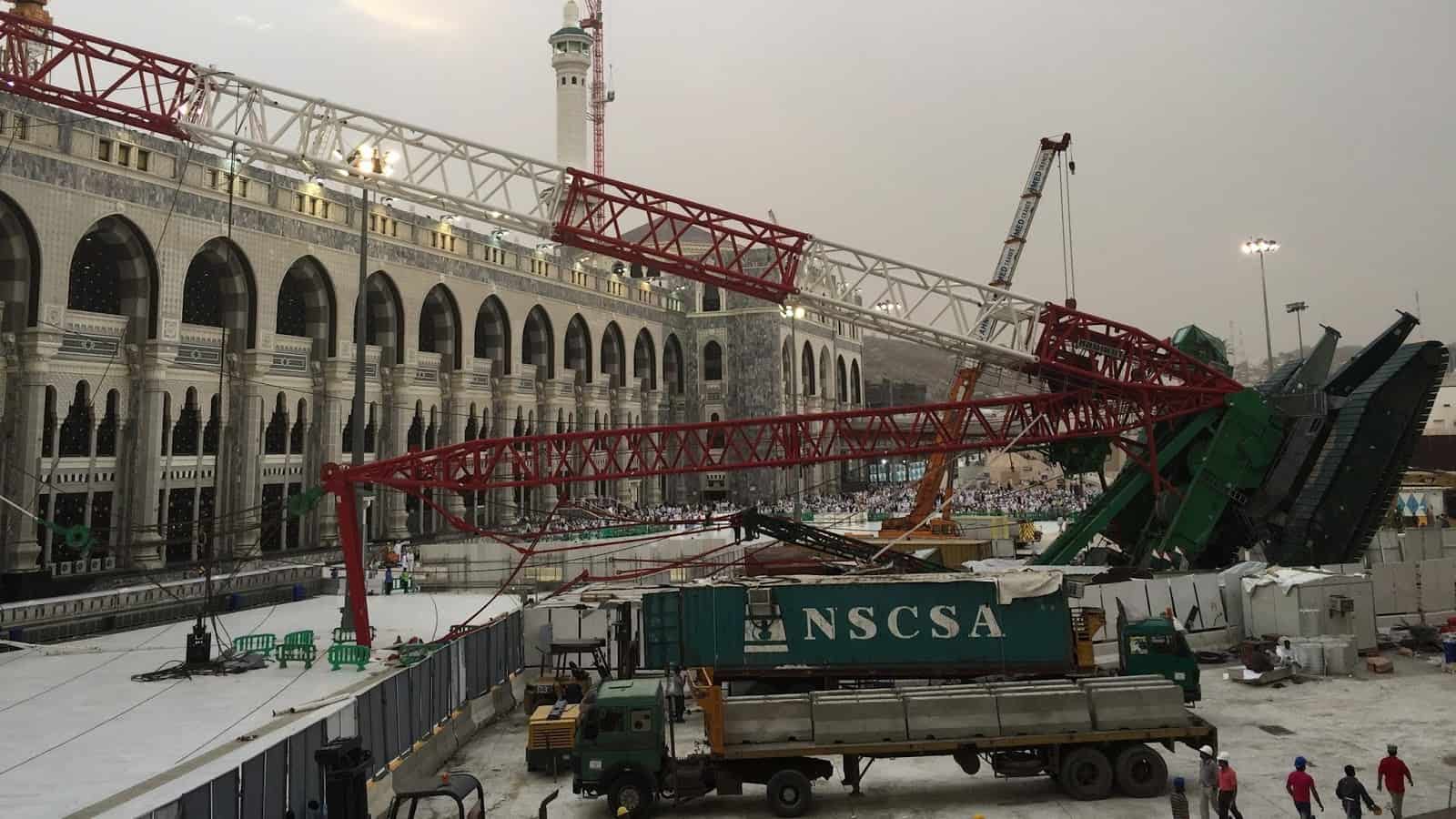 Seven years after the crane crashed at Makkah Grand Mosque, killing some worshipers and injuring others, the Saudi Arabia authority and the National Hajj Commission NAHCON have finalised arrangements on compensation matters for the victims. Speaking during the occasion when he led a delegation to the Embassy of Saudi Arabia in Nigeria to finalise the … Read more 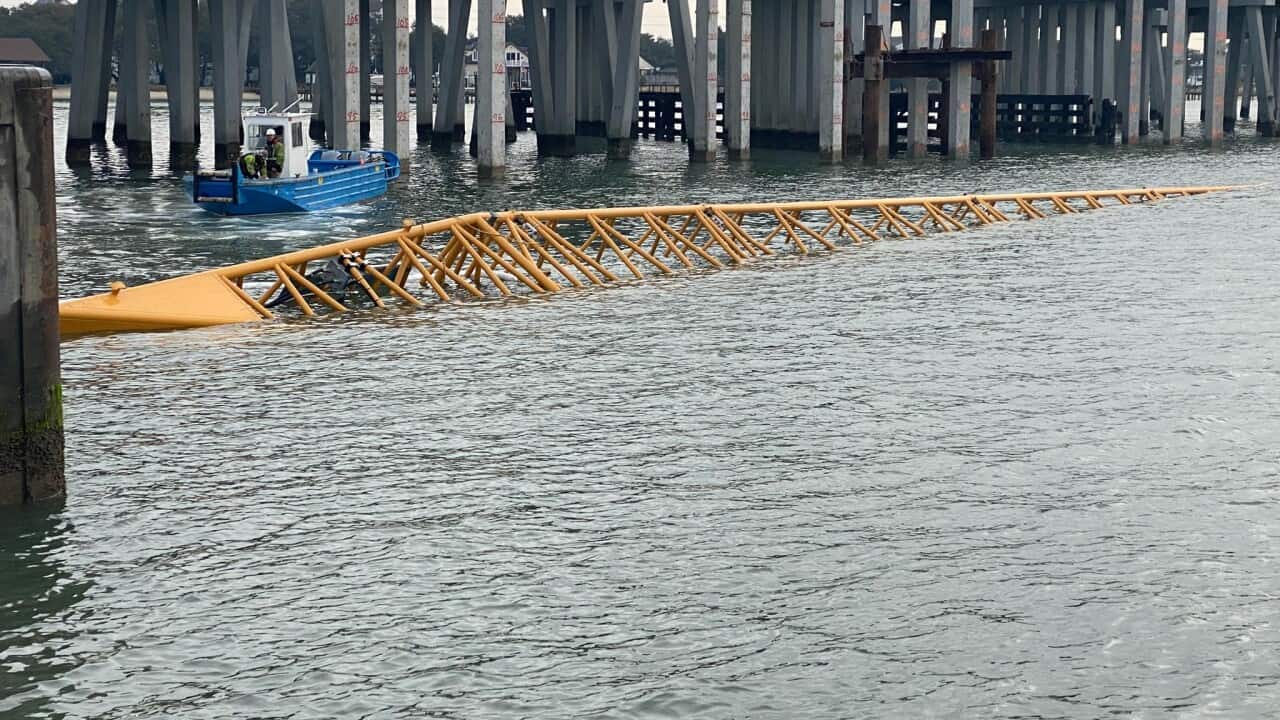 Nearly two months after a crane crashed into the water at the Hampton Roads Bridge-Tunnel, officials have completely removed it from Willoughby Bay. The crane “walked off” a barge around 8 a.m. on February 8, per a spokesperson with Hampton Roads Connector Partners, which is overseeing the HRBT expansion project. He said the operator of the crane … Read more

Ontario’s Ministry of Labour is investigating after an incident involving a crane at a construction site north of Toronto left two people injured. York Regional Police said the incident occurred shortly after 11 a.m. on Friday (26th March) at a site located near Woodbine Avenue and Stouffville Road in Whitchurch-Stouffvile near Gormley. Two people were … Read more 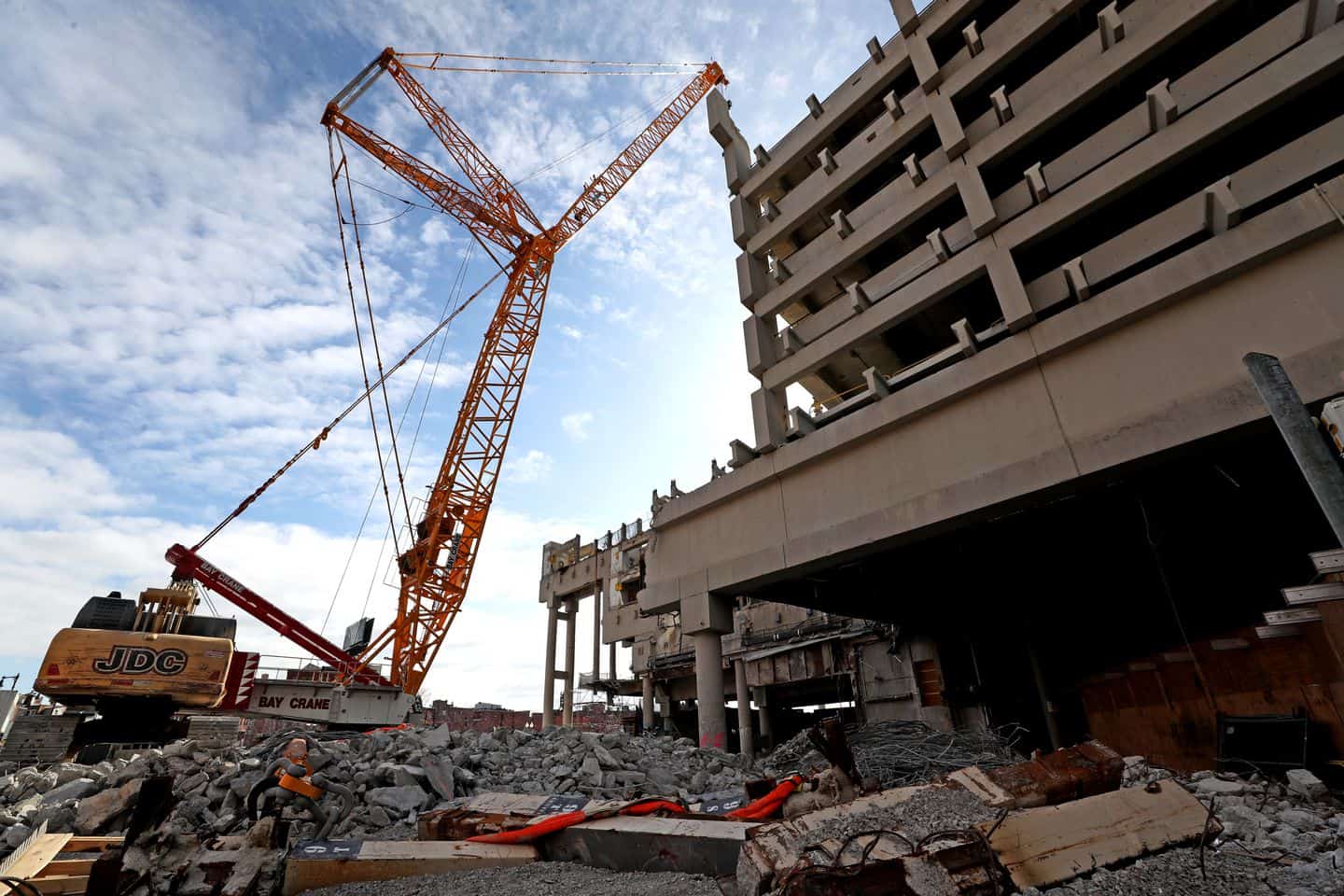 Crews told WCVB that a crane had collapsed on top of the Government Center building garage on 26th March, which was being demolished at the time of the incident. A construction worker has died in Boston after the small crane he was in caused a portion of a parking garage to collapse near the Government … Read more

A construction worker identified as Lungo Oleg, of Brooklyn, has tragically died in a crane accident at a popular strip mall on Route 300 on 19th March. Orange County police officials are saying that the accident took place on Thursday. Lungo Oleg was working at a construction site at a strip mall that is being … Read more A crane collapsed and crushed two cars parked on South State Street in Salt Lake City on Tuesday night (15th March), blocking southbound lanes. One person was injured in the incident. Police originally said the crane operator was in serious condition after falling about 20 feet, but on Wednesday the construction company said the drill … Read more Three people who were injured and the families of two people killed after a crane collapsed on a Seattle construction site in 2019, will receive $112 million in a settlement, David Beninger, a lawyer for one of the victims told ABC News Tuesday. The crane fell from the construction site which included a Google office building in … Read more 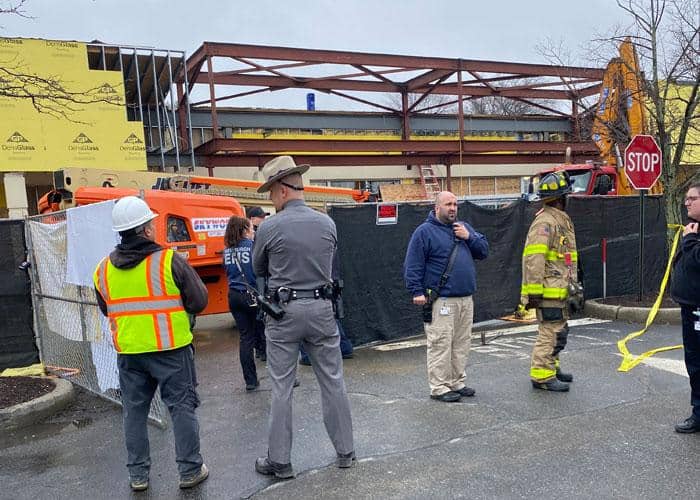 A construction worker was killed late Thursday afternoon (17th Mar) when he was crushed by a piece of machinery on 1431 Route 300, Newburgh Towne Center, in the Winona Lake area of the Town of Newburgh, emergency services personnel said. Town Police and EMS staff and Winona Lake firefighters were on the scene of the … Read more

Police are hunting for thieves who stole the arm of a hydraulic crane from a building site. The arm of the crane, which is estimated to be worth £8,000, was removed and stolen from a trailer at the site of the Cala Home Craibstone development off Inverurie Road in Aberdeen. Police Scotland said it would have … Read more 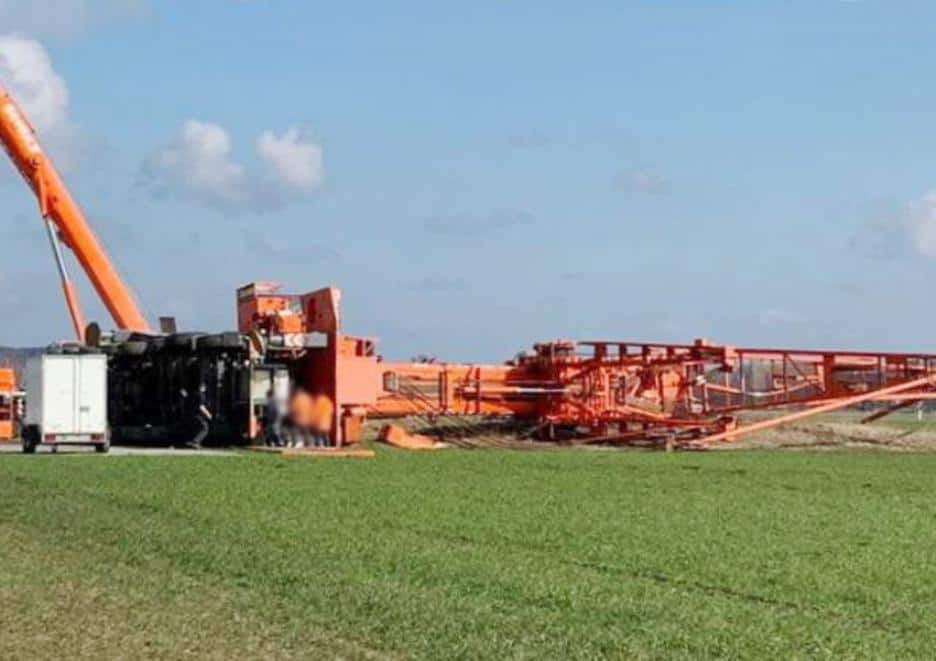 A 500 tonne eight axle All Terrain crane overturned onto its side on a wind farm in Germany on 16th March. The incident occurred on a site north of Elsterwerda on the Saxony-Brandenburg state border in Northern Germany, between Dresden and Berlin. The crane, which looks like a Demag AC 500 from crane rental company … Read more 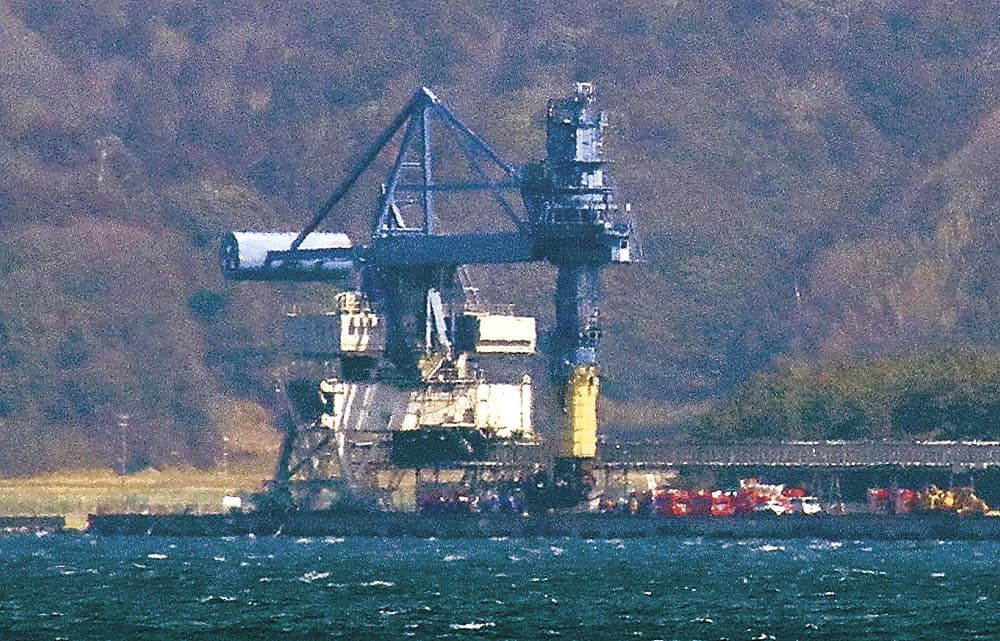 Around 10:37 am on the 11th of March, a fire broke out on the premises of the Hokuriku Electric Power Company’s Nanao Ota Thermal Power Station in Otamachi, Nanao City, and a crane for landing coal from a carrier was burned and put out after about two hours. Nobody was injured in the incident. According … Read more A self-erecting tower crane overturned onto a small apartment block in the city of Mannheim, Germany on the 3th March. We understand that the crane had not been set up that long and was to be used for the construction of a new block. The top section of the tower seems to have parted company … Read more 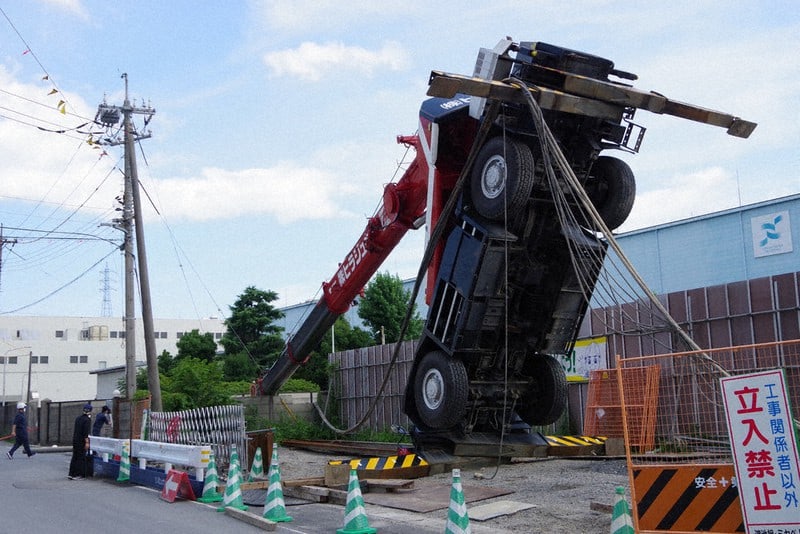 In July last year, at a construction site in Iwakuni City, he was accused of negligent fatalities in business, alleging that he operated a crane that overturn with the safety device released and killed the driver of the underlay truck. At the trial, the prosecutor’s office sentenced him to two years’ imprisonment, saying, “It was … Read more 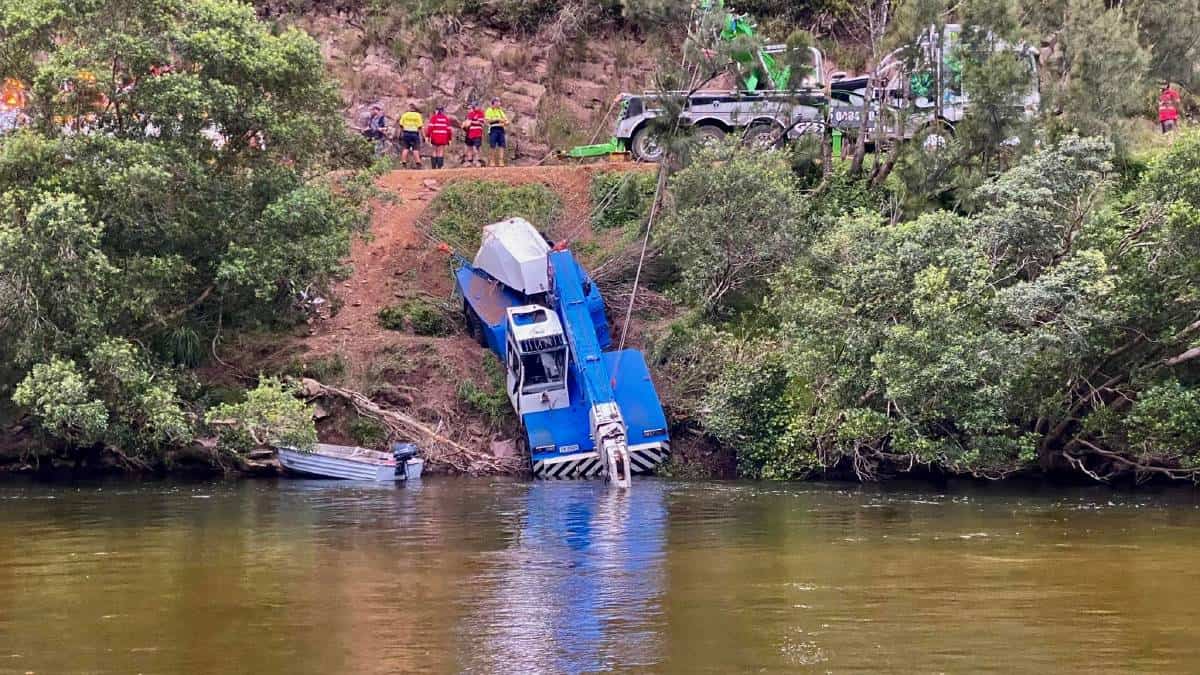 Two of the biggest truck mounted recovery mobile cranes in Australia were required to salvage a crane that had slipped off Eurobodalla Road near Cadgee and rolled into the Tuross River. The accident happened on Thursday, December 9, 2021, with the crane remaining in the river until a massive operation to retrieve it started on … Read more 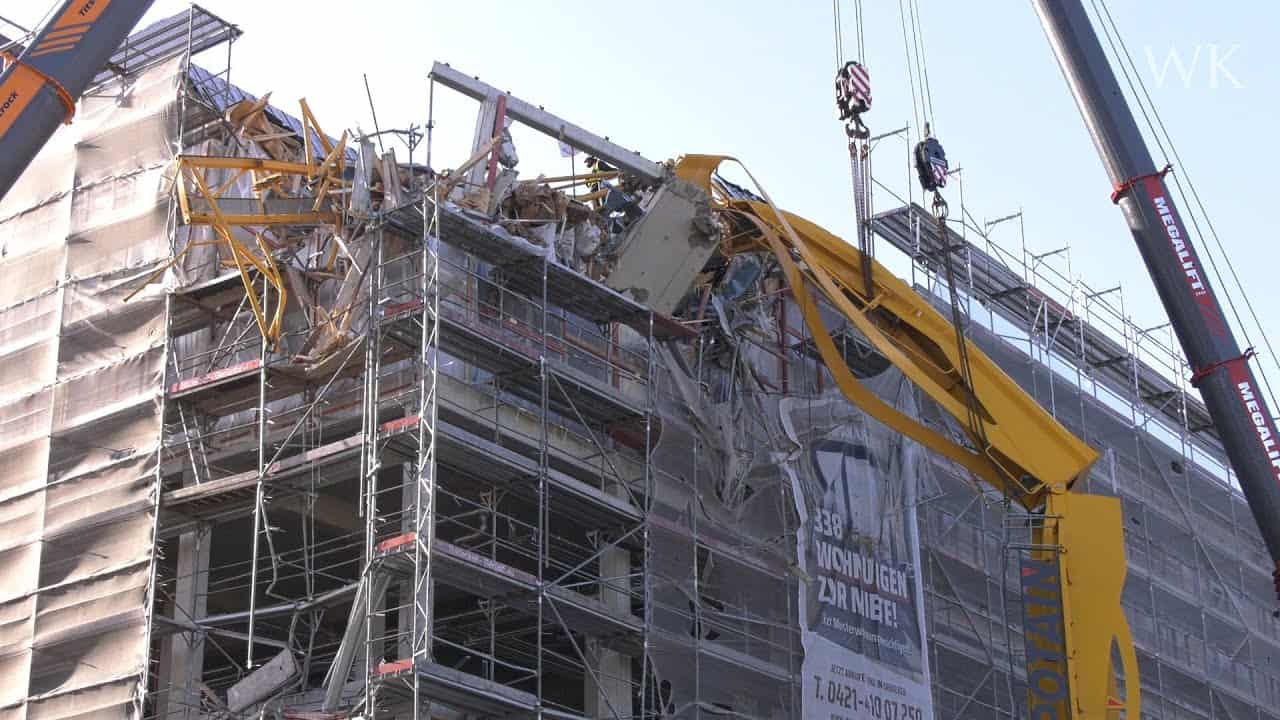 A tower crane collapsed onto a building in the Bremen harbour area on Saturday night (19th Feb) during a storm with high winds. Reports state that the crane, a Potain MDT tower crane which was rigged with a hook height of 55 metres, and that the failure occurred to the tower at a height of … Read more 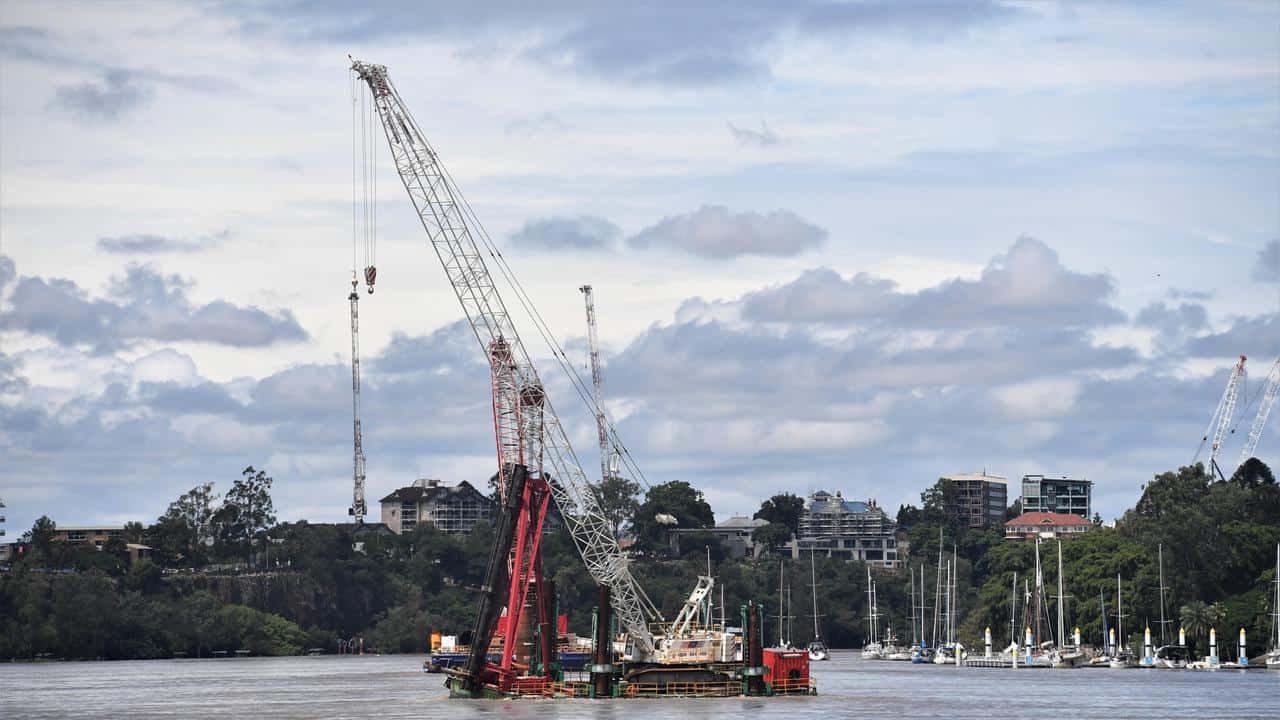 The popular Howard Smith Wharves and Riverside Walkway in Brisbane’s CBD have been evacuated with a large construction crane on the loose in the river on the 28th Feb. A pontoon carrying the crane broke free of its mooring earlier this afternoon and has since been floating freely up and down the river. “Anyone at … Read more