Notice: Trying to get property 'term_id' of non-object in /home/wwwber5/public_html/cranepedia.com/wp-content/plugins/wp-seopress-pro/inc/functions/options-breadcrumbs.php on line 356
Skip to content

Notice: Trying to get property 'term_id' of non-object in /home/wwwber5/public_html/cranepedia.com/wp-content/plugins/wp-seopress-pro/inc/functions/options-breadcrumbs.php on line 356

What Were The BIG TICKET PURCHASE in Germany Bauma 2016 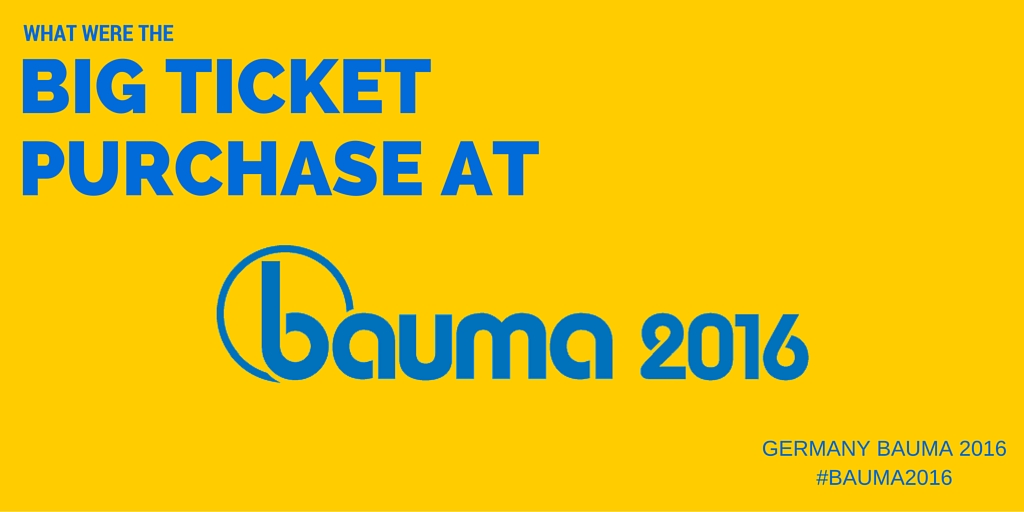 Once again, the bi-annual construction machinery exhibition in Munich has drawn crowds from all over the world to attend the exhibition. Despite a glooming economy forecast last year, the turnout was unexpectedly well with a record of more than 500,000 visitors – that is increase of nearly 10% from 2013 Bauma show.

With some many visitors, we are also expecting that there will be some good sales coming up in the exhibition and seems like most of the manufacturers does have a share in getting a few good sales in the Bauma show. So let’s check out the list of purchases below.

Auburn Crane & Rigging based in New York has signed an order for the rebrand Demag AC250-5 all terrain through Terex authorized distributor Empire Crane Co., LLC. It is the first Demag crane sold to the United States since the relaunch of the brand at Bauma.

Terex authorized dealer, Bigge Crane & Rigging has placed order for 12 units of Terex RT 90 rough terrain crane. As an integral part of the product development process, Bigge has provided input through early voice of customer interviews and feedback on design concepts. It also signifies another milestone – the purchase of over 500 Terex cranes to date.

Find out more information about RT 90.

Grúas y Soluciones Logísticas Salas, S.A. de C.V. (GSL) has purchased the first relaunched Demag-branded AC220-5 heading for America. The all terrain crane is destined for Mexico and they are not only the firs company in Mexico to purchase a relaunched Demag product, but also the first lifting company in Mexico to purchase a Demag crane years ago.

The handover ceremony was held at Liebherr stand at the Bauma exhibition to Bragg Crane for the purchase of three crawler – two LR1750/2 and one LR1600/2. The latter comes with a H boom kit, including a strengthened main boom. The cranes are set to be deliver in this year summer.

UK-based specialist lifting Hird has purchased the first unit of Maeda MC 815, serial number 00001 which was debut in Bauma. They have became the first company in UK and in the world to purchase the largest 8 ton mini crane.

Netherland-based crane rental company, Hovago celebrated with Liebherr at the Bauma for the handover ceremony of a major order for ten units of Liebherr LR 1500 crawler crane – which are launched in Liebherr Customer Days in 2015. At this same year, Hovago are also celebrating their 70 years in business and with three generations of family ownership – similar to Liebherr.

Japan-based crane rental company, MIC Group has celebrated the delivery of a new SL16000J-H crawler crane with a key handover ceremony during the Bauma show. The 1,250 ton capacity class crawler is currently available for Japan market.

On the second day of Bauma show, Hitachi Sumitomo celebrated the handover of a brand new 350 ton SCX 3500-3 to UK-based offshore specialist, Weldex. Instead of a conventional key for the handover ceremony, there was a painted head name daruma in the colours of Scottish flag and Weldex name on it to mark the special occasion. It was received by McGilvray and a ceremonial hammers were also used to break open a barrel of sake and shared among the crowd.