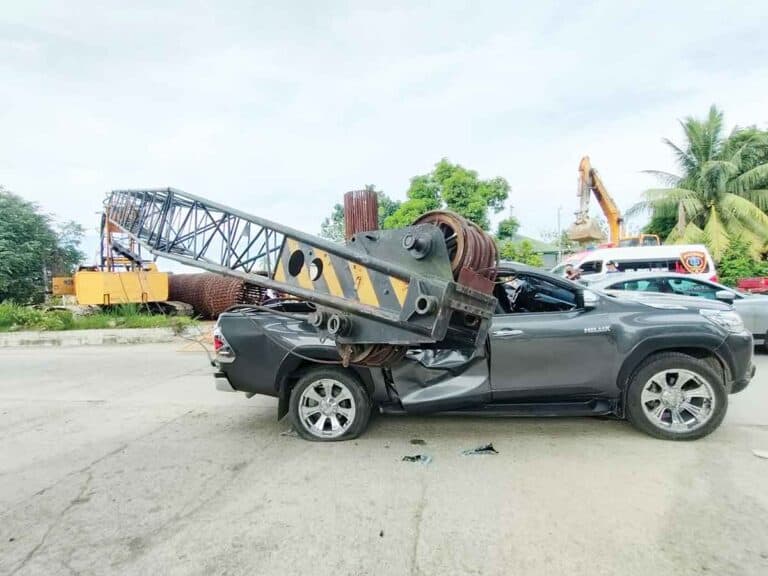 At the site of a flyover being constructed in Barangay Aganan, Pavia town, the boom of a crane manoeuvring a heavy load suddenly snapped and fell on a pickup and a car passing by yesterday afternoon (19th July 2022).

One occupant of the pickup complained of body aches and was taken to a hospital for medical examination.

According to the stunned crane operator Joven Elly Carreon of International Builders Corporation – the Department of Public Works and Highways (DPWH) contractor of the flyover – it happened all of a sudden.

The accident happened at around 4:30 p.m. The crane boom was lifting steel bars formed into a tied spiral column to be used in the flyover.

A crane’s boom is its long fixed or hydraulic arm that is used to move large objects in construction. It bears most of the weight when positioning a load, and its length determines a crane’s maximum reach.

Inside the pickup was its owner Nonong Celeste of Barangay Aganan who was driving, his wife (seated, front seat) and their teenage child (seated, backseat). They were on their way home from Calinog town when the falling boom of the crane hit the back of the pickup.

The couple, however, had to take their child to the hospital for a checkup, for back pains.

Part of the crane’s boom also hit the Mazda owned by a government employee who declined to be identified.

Police Major Rolando Arano of the nearby Pavia police station said he would seek an audience with DPWH, the contractor and local government officials to ensure that no similar incidents would happen in the future.

The crane operator was taken to the Pavia police station.

No official of the International Builders Corporation could be reached for comment as of this writing.

But according to Engineer Ormel Santos, project engineer of DPWH Region 6, the contractor informed them that it would foot the bill for the repair of the two damaged vehicles and shoulder the medical bills of Celeste couple’s child.