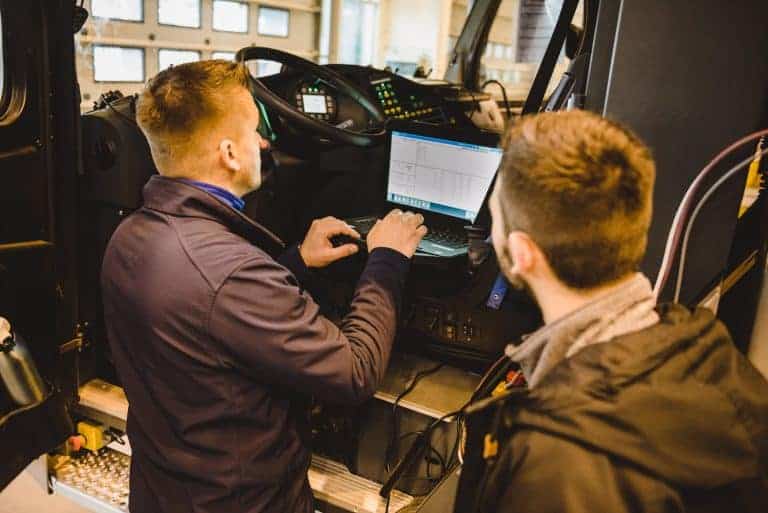 Liebherr had proven that even large vehicles such as the five-axle LTM 1160-5.2 with a road weight of 60t can meet the high on-road Euro VI c standard in a series of tests conducted in conjunction with TÜV NORD and the engineering partner IAV.

The crane performed comparably to a commercial truck on NOx and CO emissions, and better in terms of hydrocarbons.

In contrast to trucks, mobile cranes are subject to the off-road standard, regardless of whether they are being driven on the road or are on a construction site. Modern mobile cranes with the single-engine concept only have a single-engine for both road travel and site operations.

All diesel engines built in 2019 onwards, which are installed in mobile cranes and are licensed in EU countries, Switzerland or Norway, must satisfy the Euro V emissions standard. These requirements are similar to those for the Euro VI c on-road standard. Euro VI c is the limit value for truck exhaust emissions in a regulation of the European Union, based on the regulations of the European Parliament for commercial vehicles.

“We have been conducting research for over 20 years and a significant part of our development budget is spent on reducing emissions. During this time, we have managed to reduce nitrogen oxide and soot particles, in other words, fine dust, in stages by around 97%”, said Dr Ulrich Hamme, technical director at Liebherr-Werk Ehingen. “Before our fleet was converted to emissions level V, we conducted a field test with crane hire company ESB based in Biberach over a period of many months to observe and improve the diesel particulate filter and urea dosage system in real-world conditions.” Extensive PEMS (portable emission measurement system) tests have been conducted over the last few months and the experts from TÜV NORD and IAV were brought on board.

“The results of these measurements, even by comparison with modern trucks from renowned German manufacturers, are another pioneering, forward-looking milestone in our steady development of engines and gearboxes for our cranes,” is how Hamme summed up the results.

In real life operation, away from the special conditions of the test benches, in other words on a standardised typical route which, in addition to urban traffic, also includes rural and motorway driving, the team compared the emissions from a laden 40t Mercedes Actros 1842 truck with those from the 60t Liebherr LTM 1160-5.2 crane. The testers from TÜV NORD and the specialists from IAV with a great experience of PEMS measurements monitored the entire trip around Ehingen and Ulm. “This measurement makes sure that everything is working correctly, the measuring system is taking measurements at the tailpipe and the results are documented independently”, said TÜV NORD project manager Dr Martin Goschütz.

When the results were presented in Ehingen by Daniel Lüderitz from IAV three months after the test drives, the evaluations showed a clear result – the off-road emissions stage V Liebherr cranes show emissions well inside the requirements of the on-road Euro VI c PEMS standard in real driving conditions. “Both the nitrogen dioxide emitted by the crane and the carbon monoxide are in the comparable range to the emissions of the truck while the hydrocarbons were even lower than those measured in the truck”, stated Goschütz from TÜV NORD.

“Mobile cranes are used in very limited quantities around the world compared to trucks and only cover around 10,000 kilometres per vehicle per year”, said managing director Dr Hamme. “The PEMS test shows the fact that our mobile cranes can definitely stand up against the emissions from long-distance trucks, that’s extremely pleasing. It shows us that we are doing the right thing by ensuring that we use the very latest engine and gearbox technology despite the short distances travelled per year. Combined with a sophisticated, efficient emissions treatment system, our mobile cranes have now achieved this tested status which means that we are setting pioneering standards in terms of cleanliness and environmental.”