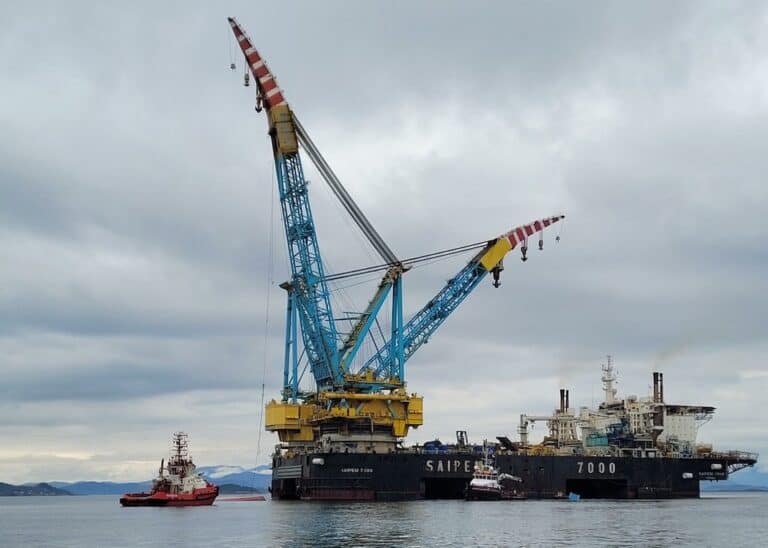 A lifting accident last Thursday (14th April) with one of the world’s largest semi-submersible cranes caused tense moments in Norway as onlookers feared the vessel might be sinking. It involved a couple of cargo barges as well, causing some to capsize.

Saipem 7000 left the Seagreen offshore wind project in Scotland, where the vessel is installing the wind farm’s jacket foundations and scheduled for maintenance. It was expected to return to Scotland later this month.

According to Saipem, after having completed DP trials as per the DNV testing programme, Saipem 7000 was performing a planned five-year main cranes load test, under the attendance of the Classification Authority.

The vessel was in a Norwegian fjord in Åmøyfjorden, a centre for Norway’s offshore oil industry near the Port of Stavanger when the accident occurred. It has been unclear what the vessel was lifting when bystanders reported hearing a loud noise and thought that the vessel is going to sink.

Luckily, no one was injured in the incident and the crane vessel was righted afterwards. The authorities reported that the accident was due to the failure of one of the cables on the lifting crane. The load was lost, hitting the deck and a barge positioned alongside the crane, causing the barge to capsize but remain afloat.

In a statement released by Saipem, it has appeared that the main block wire broke during the test lifting operation and the testing load, the two cargo barges, with the main block, were released into the water.

Built-in 1987, Saipem 7000 is a dynamically-positioned semisubmersible crane vessel operated by Italian offshore contractor Saipem S.p.A. The vessel is one of the most capable ships of its kind in the world, with two twin 7,000 metric tons capacity cranes for tandem lifts up to 14,000 mt.

In 2019, the Saipem 7000 set the Gulf of Mexico lifting record with an 11,100 mt lift of a gas compression topside for a platform in the Ku Maloob Zaap oil field in Mexico’s Bay of Campeche.