Below are some of the known accidents to date.

1. Crawler Crane Topples and Crashed Into Driveway of House at Potong Pasir. 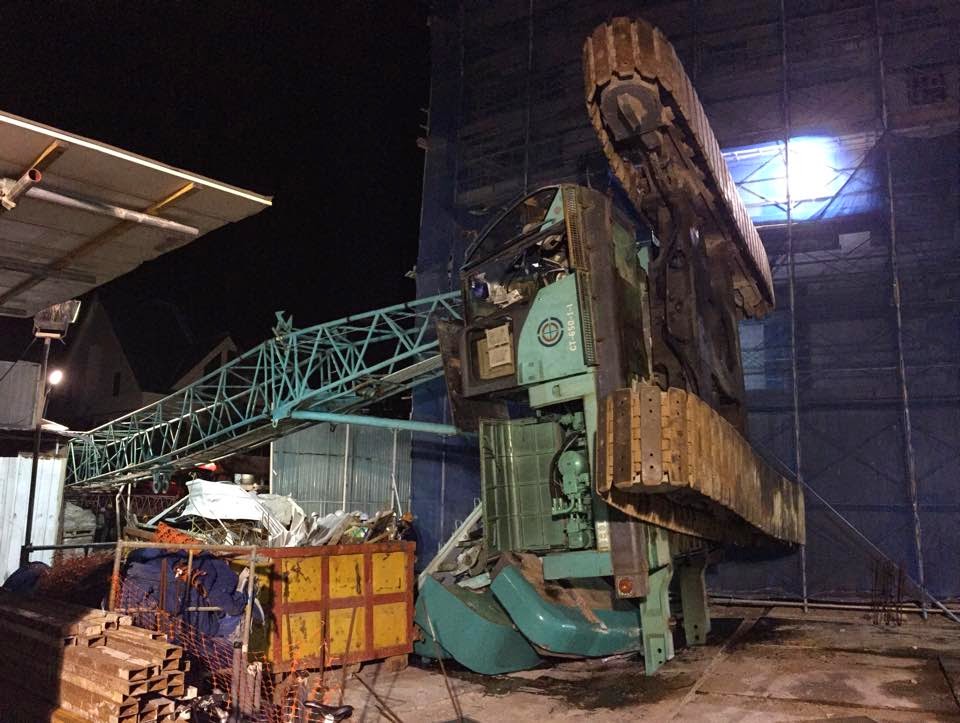 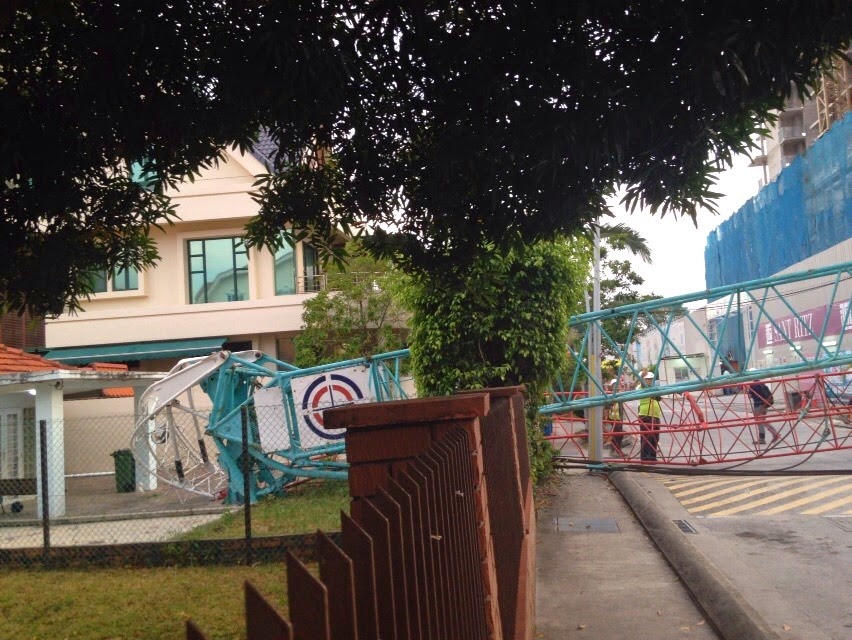 A 65 tonnes crawler crane with tower jib as toppled at the construction site for the upcoming Condominium Sant Ritz along Tai Thong Crescent on 24th February 2015 in the afternoon and the boom section and crashed into the front porch of a house opposite of the crane.

A resident in the neighboring unit came out and saw the crane toppled across the road when she heard a very loud glass shattering sound. It was also known that the house has been empty and no one was injured at the time of the accident.

Santarli Construction, the main contractor for the project has issued an immediate order for their safety officer to investigate the accident while Ministry of Manpower (MOM) has instructed Stop Work Order at the site.

From the photo, it can be seen that the entire tower jib attachment has bend 180 degree backwards before and the jib section has been extensively damaged.

The accident happened on the 3rd March 2015 at a construction site of an upcoming executive condominium, Ecopolitan, along Punggol Walk. The property is being developed by Qingjian Realty and main contractor Qingdao Construction has been contacted regarding the accident. Both cranes belong to a local crane rental company, Hua Tiong (Asia).

The 50 tonne mobile crane, believed to be of China-made was assisting the 250 tonnes mobile crane on tower crane dismantling and toppled after lifting one of the tower crane components. The demised crane’s main boom topples and hit the operator’s cabin of the 250 tonnes mobile crane, believe to be Terex AC250-1 all terrain crane. Fortunately, the operator only sustained minor injuries on the face and legs.

The dramatic footage of the accident has been captured by one of the car owner’s in-car camera whom has also been involved in the accident on the 3rd March 2015. It has occurred along the Kranji Expressway, near the Woodlands Road exit.

The vehicles has been extensive damaged on the left side. Fortunately, the passenger has been left unhurt and was astonished by the accident.

The video show footage from both its front and rear camera by driver, Solomon Anthony during the time the mobile crane rammed into the left side of his vehicles and other 11 vehicles. A total of seven passenger cars, three lorries, one truck and a taxi has been involved in the accident.

A 33-year-old male and 43-year-old male was injured due to the accident, but found conscious. Both were subsequently conveyed to Khoo Teck Puat Hospital for treatment.

The 4-axle 100 ton mobile crane stopping along the road side after the accident has occurred.

The 4-axle 100 tonnes capacity class all terrain crane, Grove GMK4100 belongs to local crane company, Hiap Tong Corporation. The crane was traveling in high speed and turning out of the downward slope slip road where it mounted onto the road kerb and crashed into the trees before hitting the vehicles. Cause of the accident has not been determined.

This was a fresh photo which was received from a anonymous user which has occurred yesterday, 8th March 2015 in the during. The rough terrain crane, believed to a Kato 70 ton SR700L has collapsed over front in one of the site said to be in Tuas South area Sunview Drive. The crane belongs to a local crane rental company, Beng Huat Crane. Developed JTC Corporation said the incident happened when it was extending its boom. The area has been cordoned off and JTC is working with the contractor to facilitate the Ministry of Manpower’s investigation. The accident took place at Yong Xing Construction’s site and MOM has issued stop-work order at the site while investigations are ongoing.

It was said that they have deployed their own 250 ton mobile crane, Terex AC250-1 and has completed the crane recovery together with the aid of another crawler crane.

This was another photo received from an anonymous user showing that a 50 tonne rough terrain crane, Kato SS500SP has broke at the third boom section while lifting a mancage for a job in Jurong Island.

No other news or update has been released for this accident.

A luffing tower crane operator was working in a workplace at Marina Way was raising the crane’s jbi when he suddenly felt an abrupt vibration. He stopped working and informed the office immediately. It was later during investigation that there was several deformations found on the main chord of its jib section. The site is under main contractor Hyundai working for Marina One residences and commercial project and the tower crane was supplied by local tower crane rental company, Access System Technology.