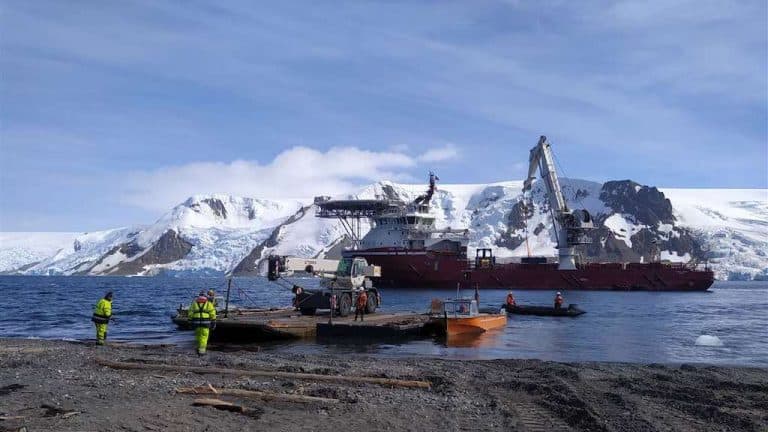 The crane was purchased by the Institute of Biochemistry and Biophysics of the Polish Academy of Sciences to permanently support year-round scientific research, which will focus on biology and ecology, but also include oceanography, geology, geomorphology, glaciology, meteorology, seismology. The research station also carries out ecological, glaciological, hydrological, meteorological and marine monitoring.

The Station is located in the Southern Hemisphere in the South Shetland Islands, on King George Island, off the coast of Admiralty Bay. The island belongs to the climatic maritime zone of Antarctica.

“This has been one of the most interesting sales we have had in our 30-year sales career,” said, Hanna Stanoch, marketing manager, EWPA. “Never before did we have to ship a machine to such a distant corner of the world, a delivery over a distance of over 14,000 km, which took several weeks.”

The RT 35-1 is a 35 tonne (38.5 US-ton) rough terrain crane with a 30.1 meter (98.75-foot) full power mechanically synchronized boom. It has three steering modes and enhanced safety features, including easy access to the cab and carrier deck and no obstacles on the top deck.

“Being in such a remote location, having a solution that can get the job done but is robust and reliable enough to withstand the harsh climatic and geographical conditions of Antarctica were key requirements for the job,” added Stanoch. “We had no hesitation in recommending the RT 35-1 for the job – in our experience we know it can travel and manoeuvre over the harshest terrain with ease, its high-strength steel can endure extremely cold temperatures, while its rugged axles and machine superstructures handle snow.”