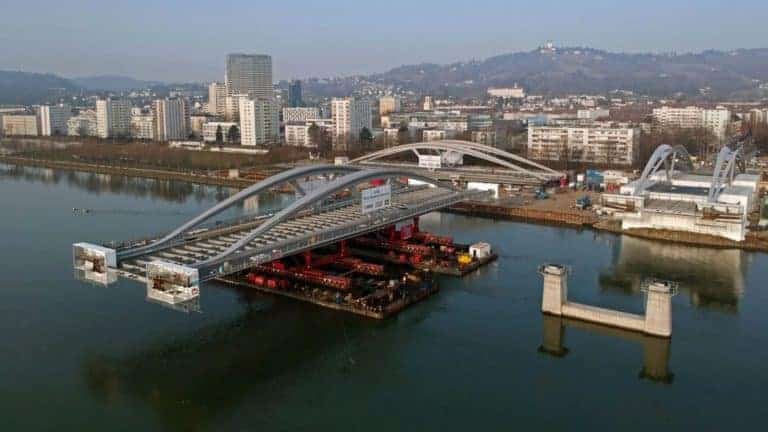 As COVID-19 situation continues, the entire market has been slow. However, the crane industry big brother, Mammoet, is still busy with some of the mega projects that is going on around the world. I cannot wait till June to release this post hence I will write it now to see what they are doing at the moment.

Before we start our article, let’s congratulate Mammoet for winning three European Association of Abnormal Road Transport and Mobile Cranes (ESTA) Awards of Excellence 2021! ESTA announced the winners on 22nd April 2021 via a virtual ceremony.

They won the “Combined Techniques” award for a technically challenging decommissioning project at a German nuclear power plant which we will list down below. Their second award of the afternoon was for the installation of a bridge in Eindhoven, Netherlands in the “Cranes telescopic lifting capacity > 120t” category and the third award in the “Innovation End User” category for the development of its revolutionary FOCUS30 crane.

6th May 2021 – Block I of the Neckarwestheim nuclear power plant (GKN I) was shut down in 2011 and has being dismantled since 2017. EnBW Kernkraft GmbH (EnKK) entrusted Mammoet with the safe removal of the three steam generators, each weighing around 290t, and the pressuriser, weighing around 90t, from the plant building as complete components.

The key challenges of this project were the high-quality requirements of the client and the fulfillment of regulatory requirements for working in nuclear facilities. Over a period of 24 months, all details were meticulously planned in close cooperation with the client during an extensive planning phase.

Mammoet proposed that the existing building crane was used, as well as the steam generator handling system DHS-500 – developed and built in-house by Mammoet – in combination with a hydraulic skidding system. With this methodology, they are able to save time and skid the steam generators out from the building and transport them using 17 conventional axle lines. The process is rather complicated and you can find out more on the decommissioning process here.

30th April 2021 – Austria was unable to reconstruct the over 100-year-old railway bridge crossing the Danube in Linz, they have decided a new combined road and railway bridge would be built. Mammoet was trusted with the project by MCE GmbH, a company of the HABAU GROUP, as they have already complete numerous similar waterborne bridge installation and could assure the use of its own equipment to avoid interfaces that could have delayed the project.

Mammoet’s task was to move the two main supporting structure of the new bridge – each weighing around 2,800 tonnes, 100m long and 32m wide – from the pre-assembly area on the side of the Danube to the piers in the middle of the river. Four barges were coupled together forming a single vessel and 120 axle lines of SPMT including supports were installed and moved onto the barges.

The bridge is expected to be completed in October 2021 and, as a key project, will greatly relieve urban traffic in Linz in the future. Here are more details of the Linz bridge project. The following video shows the footage of how the jacking and positioning of the bridge being carried out.

20th May 2021 – Many of the windmills in several countries, including Brazil, have narrow internal roads of 6-7m width which restricts the use of conventional crawler cranes and relocation between turbines. This cost more time and money to carry out the dismantling, tarnsport and subsequent re-erection of the crane.

Mammoet realised that their 600-tonne Demag CC2800-1 located in Texas was not being used and teams in Brazil and Texas recognised that conversion of the crane would bring a much-needed addition to the Brazilian fleet. While still in Texas, the 600-tonne crawler crane underwent a full conversation from a standard 9.9m wide tracks to its new 5.3m wide narrow track configuration. The crane’s software was also upgraded and thoroughly checked by internal teams as well as factory Demag technicians.

In addition, Mammoet has also invested in additional boom sections and a fixed jib, a full configuration needed to execute wind turbine works. With these modifications, the crawler has the capability to lift turbine components with hub heights up to 125m tall.

11th May 2021 – Mammoet has recently completed the heavy haul of the largest modules to be received so far for the construction of a Gulf Coast plastics manufacturing facility. at San Patricio County, Texas.

The recent shipment used as many as eight sets of SPMT and 62 axle-lines for a single module (496 axles-line in total) and at its operational peak, they have utilized 1,578 axle-lines of SPMT to ensure continuous delivery of modules to the site. The loads are some of the largest onshore modules in the industry which were transported along a dedicated 8 km heavy haul route which includes two major roadway crossing that is wide enough for a Boeing 747 to travel along with it!

GCGV is a joint venture between ExxonMobil and SABIC, created to advance the construction of a plastics manufacturing facility in San Patricio County, Texas and the duo have worked together in petrochemical ventures for more than 35 years.

24th Feb 2021 – Mammoet has completed the installation of the world’s longest airside bridge at Hong Kong International Airport. the pedestrian bridge spanning 200m long connects HKIA’s Terminal 1 with the North Satellite Concourse and is high enough for the world’s largest passenger aircraft (currently Airbus A380) to pass underneath!

Another record which they have set for this project is using for the first time with their Mega Jack 5200 system installed on Self Propelled Modular Transporter (SPMT). If you are lazy to read how they do it, you can refer to the videos that Mammoet has released recently on the HKIA project below. There are a total of five parts to it.

Mammoet has used its wide expertise and a different range of equipment to make it happen. The team faced the challenge of having a limited period to transport a load weighing approximately 5,100 tonnes over 3 km. They overcome this challenge by designing a solution that provided flexibility to the client, minimized disruption to the airport’s day-to-day schedules and provided successful delivery of work, all within a confined space.

264 axle-lines of SMPT were used to transport the bridge a distance of 3.5 km across the taxiway withiin just five hours to the final erection area. The bridge was temporarily set down on the airfield’s apron, wiith the supports taking 10% of the weight, and jacked-up to its installation height of 14.3m. Next, it was picked up and lifted above the piers before being lowered into position.

The team also closely monitored the Mega Jack’s hydraulic during the welding works by the client, China State Construction Engineer. It took a total of seven days to complete all necessary works.

21st March 2021 – Mammoet has been contracted to replace the existing roof of AFAS Stadium in Alkmaar, the home stadium of AZ Alkmaar football team playing in the top level of Dutch football. The works started mid of 2020, with Mammoet deploying mobile tower cranes and all terrain cranes to dismantle parts of the roof.

Check out the video from AZ Alkmaar on the tandem lifting operation below:

South Korean Samsung Engineering is the main EPC contractor and they awarded the transport and installation scope of the project to Mammoet. Over 60 components will be received either at King Fahad Industrial Port in Jubail or at a fabrication facility in Dammam and transported to the site for further installation. The heaviest components include four slug catchers, each weighing over 400 tonnes.

The plant comprises a gas injection facility with a capacity of 1,500 million standard cubic feet per day (mmscfd) as well as a withdrawal facility which is capable of processing up to 2,000 mmscfd of gas. The facility is expected to be completed in 2023 and will enable Saudi Aramco to efficiently manage surplus gas volumes to meet seasonal demand. Full story here.

29th April 2021 – Mammoet complete the transportation around 50 pieces of cargoes from Thailand to Laos as part of the Nam Theun 1 Hydropower Project. Hansa Meyer awarded the project to Mammoet and both teams worked closely to execute multiple operations at the same time. Both teams displayed their strength and expertise with combined capabilities.

The heaviest cargo weighs 236 tonnes needed to be transported on a 1,100 km land journey from Laem Chabang to Ban Phaeng in Nakhon Phanom Province, and another 1.1 km river crossing journey across the Mekong River (longest river in Southeast Asia) to a jetty across the border in Laos. You can find more details of the transportation information here.

By the way, The Nam Theun 1 Hydropower Project (NT1HPP) is a 177m high dam located on the Nam Kading River in Bolikhamxay Province. The dam has a total installed capacity of 650 MW, of which a total of 520 MW will be exported to Thailand and 130 MW will be channeled towards domestic consumption.

27th April 2021 – Tasked by Polish company Grupa Azoty, one of the main players on the European fertiliser and chemical market, Mammoet completed the first scope of work that will lead to the construction of the propane dehydrogenation and polypropylene (PDH/PP) blocks of its client’s chemical facility.

The project took place in the town of Police, in the northwest of Poland, and involved the lifting and transport of more than 480 items from a small port to the construction site 6 km away. Among the items transported, 5 were extremely large with a weight between 600-800 tonnes, and the largest was around 900 tonnes.

Mammoet Poland had to look for efficiency and creative solutions to get those cargoes across from the port to their final location. Surveys and engineering drafted plan were created to see how it should be delivered. As big portion of the journey will be on public roads, they also have to make sure that all the permits were in place and the route was ready to take the large weight of the transport.

Many preparation including building a Roro ramp, bypasses were created, roads were widened, electrical wires taken down and placed underground, lamp posts removed and replaced. The real challenge and perhaps the biggest achievement was to build a bridge that could hold 650 tonne of weight across a 20m wide channel. See the video below to understand more!

If you want to know more in-depth about this project, you can find the information on this news.

The purchase includes two state-of-the-art 800-tonne capacity linear winches, which are unique to the industry, their innovative design is patented and allows socket passing under load as well as utilizing advanced hydraulic controls for accurate monitoring. This results in less downtime and increased project efficiency.

They also added several smaller linear winches ranging form 100 to 300 tonnes, and a range of drum winches. The equipment will be added to Mammoet’s Offshore Services equipment fleet.

By the way, there was a Q&A session with Mammoet this month to talk about their position in the world, opinions going forward to working with freight forwarding and renewable energy markets. Check out the Mammoet’s Interview with the management here.