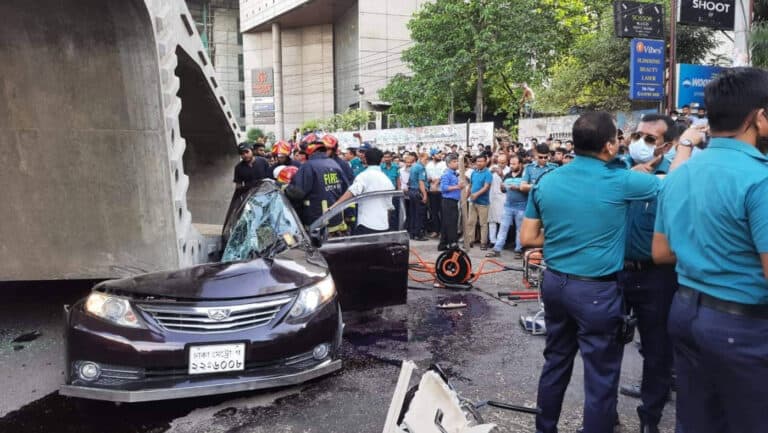 A case has been filed for causing the deaths of five persons by negligence after an approximately 60-tonne segment of a box girder of Bus Rapid Transit (BRT) project fell from a crane on a car in Dhaka’s Uttara area yesterday (15 August 2022).

“The accused are unnamed and the number was not mentioned in the case. We are identifying those who were negligent and trying to arrest them,” he told The Daily Star.

Two passengers – a newly married couple Rezaul Karim Hridoy, 26 and Riya Akter, 19 – were rescued, but the rest of the passengers – Jharna Akter, 27, her two children Zakaria, 4, and Jannat, 6, and Hridoy’s father Ayub Hossain Rubel, 55, and his mother-in-law Fahima Akter, 38, died on the spot.

It happened at Jasimuddin Road intersection on Dhaka-Mymensingh highway around 4pm when a crane toppled while moving the precast concrete segment.

The project to create separate lanes for specialised buses across an area of ​​about 20km from Gazipur to the airport is being implemented by three government agencies – the Roads and Highways Department (RHD), the Bangladesh Bridge Authority and the Local Government Engineering Department. Three project directors are in charge of coordinating the work of the three agencies.

The project work that started towards the end of 2012 as part of the plan to finish the construction of the BRT by 2016 has not been completed by one-third in 10 years. During this time, both the project completion tenure and cost have doubled.

On Thursday (1 September), the committee submitted the investigation report to the Secretary of Road Transport and Highways Department ABM Amin Ullah Noori.

It has been left to the hands of the ministry whether to take strict measures like cancelling the contract and blacklisting the contractor company in this incident.

According to BRT sources, the negligence of the contractor was responsible for the loss of lives in the girder accident in Uttara on 15 August.

The investigation report contains the statements of about 20 people, including the imprisoned crane operator Al Amin Hossain Hridoy. His statement was recorded on prison premises.

Statements of 10 Chinese citizens were also recorded. However, due to the lack of cooperation, the investigation has been delayed, the probe report added.

Earlier, the preliminary probe into the accident also revealed the negligence of the contractor company China Gezhouba Group Corporation.