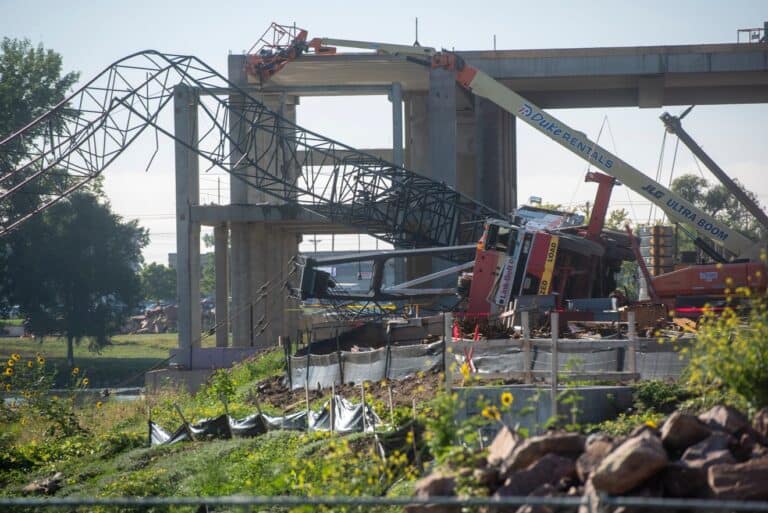 There were no injuries sustained during the collapse, which happened at 7:30 a.m., according to Lloyd Company’s Chief Operating Officer Jake Quasney.

“We didn’t have any injuries, so we’re working with the team to get the crane up there and make sure that the structural integrity of the building (remains) and keep everything safe, but thankfully, everybody’s safe and everybody’s going home tonight,” Quasney said.

The company is gathering more information to find out why the crane collapsed, according to Quasney.

The Sioux Steel District is a $220 million project and has multiple phases on the edge of the Big Sioux River. The project plans for three major building areas including a hotel/convention centre, a nine-story office building, a parking ramp/office and retail wrap in the five-building project.

The development will include several condos, and investments into the arts, retail and restaurant spaces, according to the previous reporting from the Argus Leader.

COVID-19 delayed the project that was geared up and ready to go in the summer of 2020, Lloyd Companies Chief Operating Officer Jake Quasney told the Argus Leader in July. The project was delayed for about 15 months.

All phases of the project are now expected to be completed in 2024. The parking ramp will be the first building in the project to open and includes 900 covered and 70 surfaced parking spots for office tenants, along with access to public parking.

The nine-story office building will be the second operational building. Retail spaces and condos will follow and are expected to be completed in late 2023. Canopy by Hilton and the last portion of the apartments will be finished in 2024.

This reminds me of another crane accident that happened in 2019 at the wind farm in South Dakota when Bucker’s LR 11000 collapsed due to soft ground.

PrevPreviousCrane operator sued for causing death by negligence in Dhaka (Updated)
NextTree-cutting crane flips over, crashes into home in BroadmoorNext