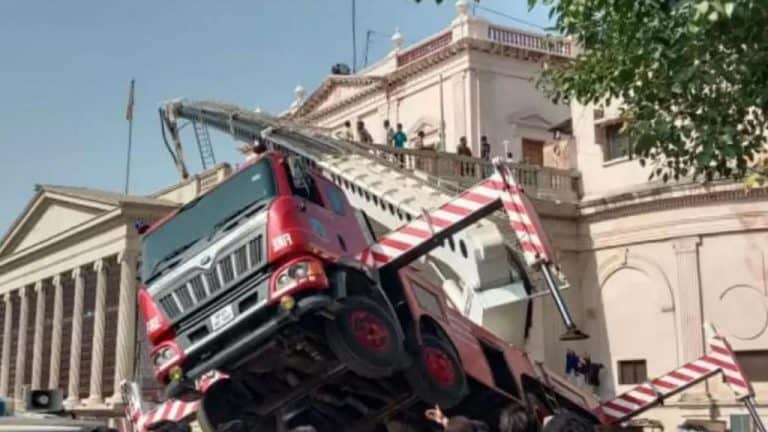 The first incident occurred on Saturday in Gwalior, south of Agra, in Madhya Pradesh. Three employees of the Gwalior municipal corporation died, and one was seriously injured when the truck-mounted fire rescue platform, which they were using to install a flag on the post office building, suffered a structural failure on one of the outrigger beams.

The deceased were named Pradip Rajouria, 32, Kuldip Dandotiya, 35, and Vinod Sharma, 55. A complaint has been submitted by the injured employee’s family, Manzar Alam Khan, for culpable homicide not amounting to murder.

The process names the corporation and its fire officer Umang Pradhan as well as the platform’s driver Dharmendra Verma. It alleges that despite requests by all four employees not to use the platform as they lacked training on it, both Pradhan and Verma insisted on using it.

Below are the news reporting from a local news source:

Crane Collapsed at US Embassy

The second incident occurred on 14th Aug at the US Embassy in Delhi. As reported by the police, part of the building is undergoing construction and the labourers were working inside the US embassy.

Suddenly, part of a lattice crawler crane was said to have overturned at the site, resulting in two construction workers who died on the spot and one other who sustained severe injuries. Unfortunately, the third man passed away at the hospiital.

The news source can be found here: The Indian Express