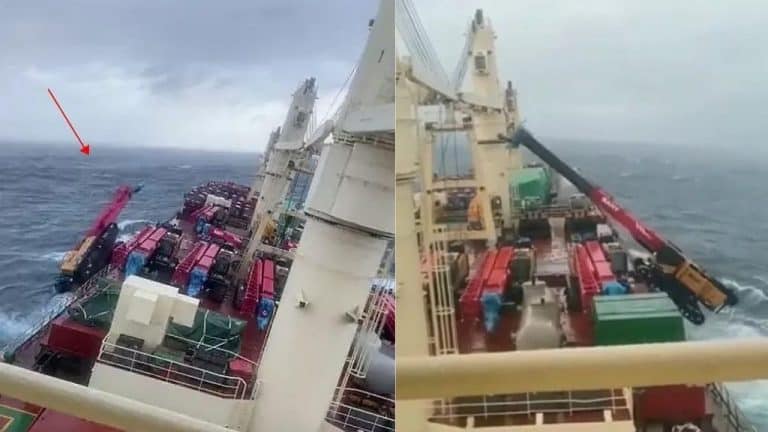 A cargo ship carrying hoisting equipment heading for Indonesia encountered a typhoon “fireworks” at sea. Strong winds and huge waves caused the hull to be unstable and sway from side to side.

In inclement weather like this, the ship crew could only stay in the cabin and watch the brand-new equipment fall into the sea one after another, and there is nothing they can do.

The typhoon “fireworks” that caused the crane crash in the sea were also the culprit for the extremely heavy rain in Henan last week. The satellite cloud picture shows that the fireworks are huge and the maximum wind force near the centre has just reached level 12. Open the eye of the typhoon.

Typhoon “fireworks” is already very strong: the maximum wind force near its centre has reached level 12, and the body is huge; the southeast jet pumped out by it has a fast flow rate and unprecedented water content. They form a water vapour highway, which continuously transports water vapour from the Pacific Ocean into the Central Plains, continuously uplifts in front of the Taihang Mountains and Funiu Mountains, and turns into a long-lasting rainstorm.

The fireworks in the future will be affected by a number of complex factors, including Typhoon No. 7 Chapaka hovering in western Guangdong, and Typhoon No. 8 Nibert, which is brewing south of Japan. Therefore, its speed will be very slow, and it will stay for a long time on the “Kuroshio Current” aka Japan Current in the Pacific Ocean.

The ship may have encountered very strong weather that caused the cranes to fall off the deck. However, we also have to take into consideration if the lashing of the cranes has been done adequately that could prevent such occurrence. Of course, they should also weld down the cranes so that the cranes would not be so venerable to the movement. Do you think this incident is weather or man-made?