In April 2013, Dutch lifting and offshore industry specialist Huisman has first announced the construction of a pair of 10,000 ton capacity tub mounted cranes and on the 1st July 2015, the Dutch and their client, Heerema Offshore Services held a steel cutting ceremony to mark the start of construction of the cranes.

Huisman has mentioned they are building the world’s largest crane that each are able to lift 10,000 ton at 48 metres radius in offshore conditions. Both cranes will be built at its facility in China which will be mounted on a new Heerema semi-submersible crane vessel. The current delivery schedule si targeted end of 2018.

Instead of using bogies or large wheels for the slew system on traditional tub cranes, the Huisman will build a 30 metre diameter bearings designed and manufacture in-house. As mentioned by them, the primary benefit is to save a substantial amount of weight. 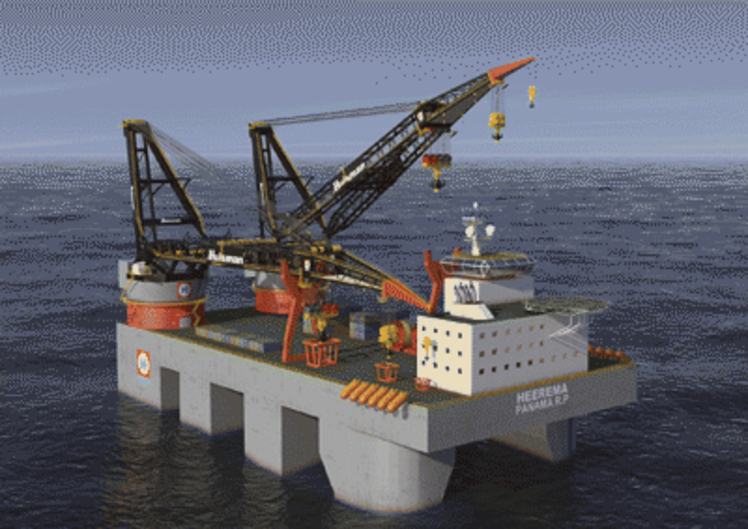 A US$ 1 billion contract has been signed between Sembcorp Marine and Heerema to aid in the engineering and construction of the DP3 semi-submersible crane vessel to carry the pair of 10,000 ton capacity crane by Huisman.

Usage of the Semi-submersible Crane Vessel

The vessel will be used for installation and decommissioning of major offshore facilities worldwide. In addition, besides having the 10,000 ton heavy-lift offshore cranes it also has a large reinforced work deck area. Measured at 220 metres long, 102 metres wide and with a displacement of 273,700 ton, it will be the largest dual-crane semi-submersible crane vessel in the world.