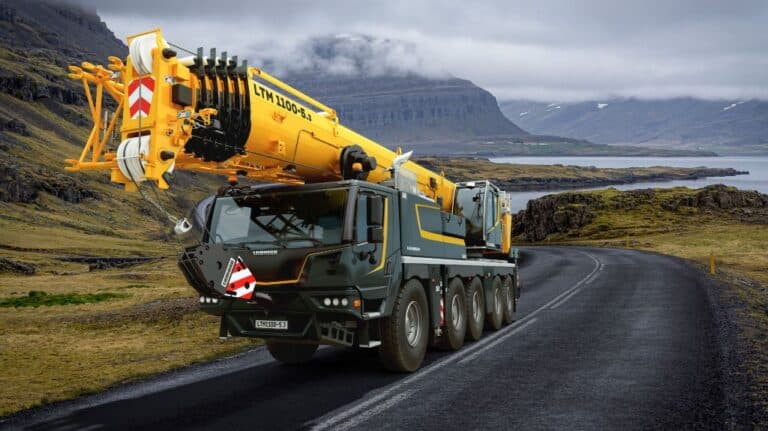 At Bauma 2022, Liebherr will present a mobile crane that takes the combination of mobility,  economy and performance to a new level. The LTM 1100-5.3 offers a powerful 62-metre  telescopic boom and carries up to 16.9 tonnes of ballast with a 12-tonne axle load on public roads. The new crane also offers economical mobility worldwide, as it can travel with an axle load of only 9 tonnes. For this reason, Liebherr will present the new LTM 1100-5.3 under the slogan “The master of all roads”. It is the second crane in the Liebherr range to feature the new  LICCON3 control system.

In the All-Terrain Cranes section of the Liebherr stand at Bauma, two mobile cranes visibly stand out. They both feature a new driver’s cabin and crane cab,  new paintwork and the LICCON3 control system – the previously unveiled LTM 1110-5.2 and the all-new LTM 1100-5.3.

When designing the LTM 1100-5.3, Liebherr focused above all on lightweight construction to allow as much ballast as possible to be carried with a 12-tonne axle load; and to achieve the lowest possible axle loads by reducing ballast. In addition, the new crane was designed with a long, strong telescopic boom in mind.

Even in countries where mobile cranes with a 12-tonne axle load are permitted on the roads, crane operators have been demanding cranes which can be driven with low axle loads and total weights by simply removing the ballast. These models deliver major benefits when it comes to obtaining licences and route permits. In addition, day-to-day circumstances often require reduced weight, such as when driving over bridges and in inner cities.

With an axle load of 12 tonnes, the new 100-tonne crane can carry up to 16.9 tonnes of counterweights. At 75 per cent of the maximum ballast of 22.5 tonnes, this is a new record for mobile cranes worldwide. This allows the new  LTM 1100-5.3 to perform the majority of its jobs as a taxi crane without additional ballast transport. Even with maximum ballast, the axle loads of 13.4 tonnes are low and evenly distributed across all axles. The new LTM 1100-5.3 has a narrow width of 2.55 metres – an additional advantage when driving on roads and construction sites. It is the first 5-axle mobile crane worldwide based on this narrow design.

At 62 metres, the telescopic boom is two metres longer than the next most powerful Liebherr 5-axle  machine, the LTM 1110-5.2. In addition, a 9.5 to 16-metre folding jib is available which, as an option, can also be adjusted hydraulically between 0° and 40°. This enables the LTM 1100-5.3 to achieve hoisting heights of up to 76 metres and radii of up to 64 metres. Other options include a 2-metre assembly jib and a side-folding rooster sheave, which offer additional flexibility in use.

The new 100-tonne crane offers extra safety, flexibility and lifting capacity thanks to the VarioBase® variable outrigger. Greater flexibility on the construction site is also provided by the standard  VarioBallast®, which allows the ballast radius to be adjusted between 4.0 and 5.1 metres.

The third generation of the LICCON (Liebherr Computed Control) system relies on proven control features, but also includes a completely new software package and programming language as well as a  faster databus, significantly more storage space and more computing power. Crane operators who are familiar with the previous control system will quickly and easily get to grips with the new version, as the recognition value is very high. Proven hardware components, such as the mobile operating and display unit BTT, have been adopted. The touchscreen function on the new large display in the superstructure cab means that it is now even easier and more comfortable to control. The way in which the information is shown has also been revised and simplified. In addition, LICCON3 cranes are prepared for telemetry and fleet management as standard. In the future, crane contractors will be able to view and evaluate all the relevant data using the MyLiebherr customer portal.

As a result of the high synergy effects involved, Liebherr is launching the new driver’s cabin at the same time as the LICCON3 control system. The modern design features premium materials and timeless lines as well as delivering a whole host of improvements for the crane driver. These include the new multifunction steering wheel, side roller blind on the driver’s door, improved instruments and modules as well as new displays. Additional convenience is offered by options such as a central locking system with a remote key and the “Coming and Leaving Home” function.

A completely new, modern automatic heating and air-conditioning system in the driver’s cabin and in the crane cab, which features an adapted design, ensures a high level of comfort. A sun sensor detects strong sunshine and automatically adjusts the heating settings.

The lighting packages for the crane cab, the superstructure, the rear of the vehicle, the front headlights and the telescopic boom as well as the lattice fly jib have been optimised and can be operated with  LEDs. The benefits of LED technology include a longer service life and superior lighting performance.

The innovative DynamicPerform coupling module is installed in the new LTM 1100-5.3. It ensures virtually wear-free starting and manoeuvring without overheating for the modular ZF TraXon gear unit because it transmits the engine output via an oil-cooled clutch plate pack. The friction heat generated when starting is dissipated in the clutch oil and supplied to the vehicle’s cooling system via an oil/water heat exchanger. Crane operators thus benefit from greater efficiency and lower maintenance costs.

This press release was sent by Liebherr on 24 October 2022.