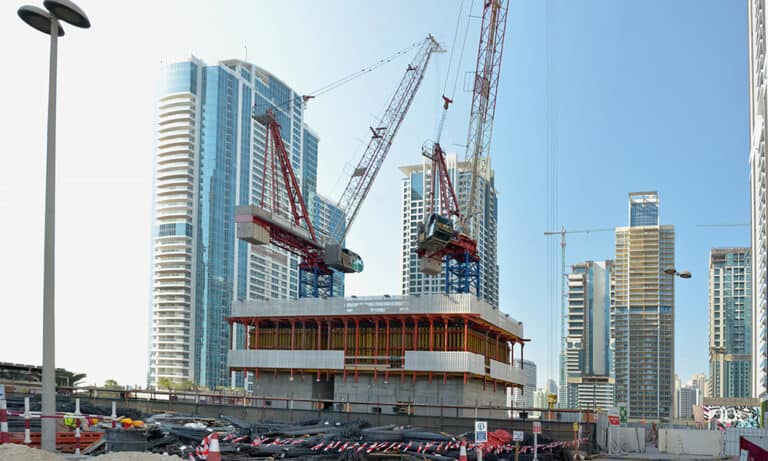 Two new Raimondi LR213s were installed for the construction of a 40-storey mixed-use tower and will remain onsite for approximately two years.

Raimondi Middle East has erected two LR213 luffing jib cranes for the construction of one of the latest high-rise development clusters in Dubai.

Two new Raimondi LR213s were installed in one of Dubai’s largest communities, Jumeirah Lake Towers, for the construction of a 163m high mixed-use tower. Upon completion, the new 40-storey tower will feature 330 residential units alongside commercial spaces.

“We rented these two luffers to the project contractor, M/S Bu Haleeba Contracting, after carefully evaluating the job site specifications and the client’s requirements. Rising in one of the most densely populated and congested neighborhoods of Dubai, the site’s surrounding towers were the key aspects considered during the site planning phase, and choosing the suitable crane model,” said Wael Hasan, Middle East Commercial Director, Raimondi Cranes.

Luffing jib cranes were chosen to avoid collision and overfly of surrounding properties, paired with the LR213’s good lifting capacity.

“The two LR213s, with a maximum lifting capacity of 14 tonnes, are currently at work onsite with a tower mast of 36m and a jib length of 50m. Equipped with a 55kW hoisting winch, the cranes can maximum lift at a speed of up to 104 minutes with a drum capacity of 650m,” Hasan added.

In the early site mapping stages, climbing plans were drawn up, as the luffers need to reach a final height of 163m. The tightly built-up surroundings of the Dubai job site meant that no external climbing would be possible, thereby necessitating an internal climbing plan.

The cranes were erected by the Raimondi Middle East Operations team and will remain onsite for approximately 24 months. Raimondi Middle East is currently working across several different UAE job sites, with more than 50 cranes deployed. Significantly, Raimondi continues to support the development of the Aljada megacity in Sharjah, and key residential buildings in Dubai.