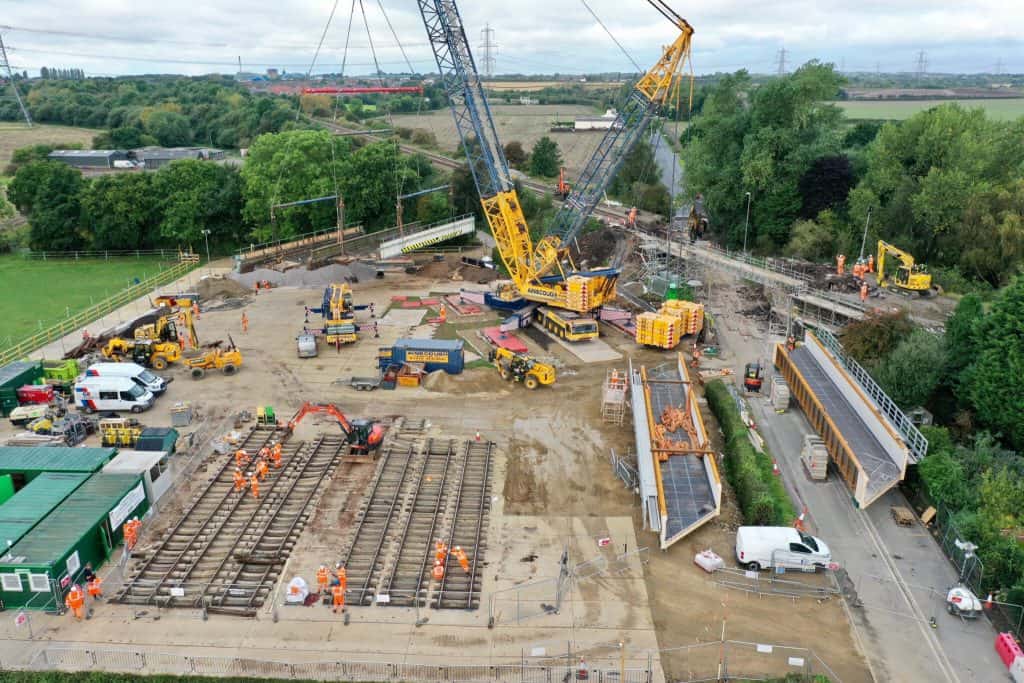 Ainscough Crane Hire has once again worked with its client J Murphy & Sons as part of Network Rail’s £2.85m Great North Rail Project, helping to secure the future of rail journeys between Manchester and Liverpool.

The two companies’ latest collaboration along with other contractors saw a 56-hour core possession that entailed the replacement of the 200.0te MAJ89 bridge at South Lane, Widnes – a steel half through rail underbridge on the Manchester Castlefield Junction to Hunts Cross West Junction lines.

Each u-deck weighed 146.0 tonnes and had an overall span length of 24.6m, some of the largest non-standard u-decks constructed in recent times.

Ainscough utilised its Terex Demag TC2800-1 crane during the successful completion of the bridge reconstruction, assisted with Murphy’s on-track plant. The crane is rigged on the 60.0m SSL configuration and up to 300.0te in the Superlift Split Tray. The existing bridge, Cill units, and new decks required SL counterweight so the placement of all items required before the possession was critical for the programme timings.

The bridge that was being removed incorporated a large skew and comprised three longitudinal beams, all of which were offset because of the skew. Ainscough utilised a six-point lift with remote load cells on the bridge central beam. The load cells along with the crane loading allowed for a precisely controlled lift.

Dave Baxter, technical contracts manager, Ainscough Crane Hire, said: “Over recent years we’ve developed a close working relationship with the engineering team at J Murphy & Sons. Together with Paul Williams, the Contractor’s Responsible Engineer at J. Murphy & Sons, we developed the lifting scheme as we have with many other bridges that have helped improve the rail infrastructure across the country – it’s been a privilege to be part of work that will enhance the daily life of individuals and communities all over the UK.

“Railway possessions like the project we’ve just completed at South Lane are complex and highly time-sensitive jobs that require meticulous planning and a commitment from all parties to collaboration. The relationship with J Murphy & Sons means we work together exceptionally well with a ‘one team ethos in delivering infrastructure improvements in a manner that is safe, efficient, and causes the least possible disruption to the rail network, motorists, and local communities.”

Hiab has received three large orders with a combined value of €12.9 million for Moffett truck-mounted forklifts and Hiab loader cranes in the USA. The

Norman Issitt of Crowland Cranes passed away suddenly on September 29th, he was 70 in April. Norman Issitt began his crane career in 1973 as

Konecranes has received a Gold rating from EcoVadis for its ambitious sustainability work, it’s highest-ever placing. The company’s actions, policies and reporting put it in the top