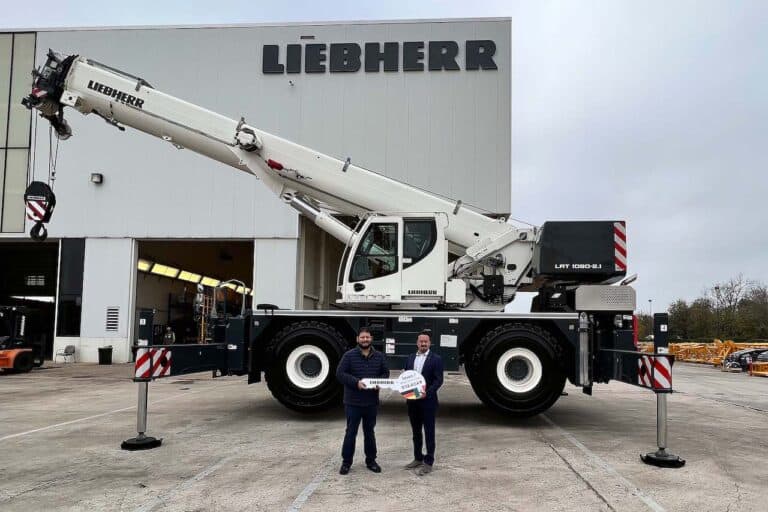 Mexican crane and heavy haulage contractor ESEASA has expanded its crane fleet with seven new Liebherr LRTs. The versatile cranes will primarily be used in the new DOS BOCAS refinery in the Southern Gulf of Mexico, where the company has been contracted to erect a 178-metre tower. For this, ESEASA has ordered a retrofit for its LR 11350, which allows the boom to be extended to 228 metres. Liebherr’s reliability, value retention and support were major factors behind the decision to buy the cranes. ESEASA also regarded the technology and easy operation of  Liebherr cranes as key for the company.

ESEASA has significantly extended its fleet in the rough terrain crane segment with its purchase of five LRT 1090-2.1 cranes and two LRT 1100-2.1 models. To date, the company’s fleet has mainly consisted of large mobile cranes as well as lattice boom and telescopic crawler cranes from Liebherr. In discussing the decision to buy the seven new LRTs, Aldo  Santos, Operations Director at ESEASA comments: “The technology and easy operation of Liebherr cranes are key for our company. The versatility of LRT cranes makes them the perfect choice for our jobs.  And the high resale value was another factor which led to us choosing Liebherr.”

The main areas of work for ESEASA’s new LRTs will be oil and gas jobs. The cranes will undertake their first jobs in the new DOS BOCAS refinery and in the erection of oil platforms for the ESEASA  OFFSHORE Division. “Liebherr is renowned for its reliability and good service network”, continues Aldo  Santos. “Retrofitting our LR 11350 once again demonstrated the excellent support that Liebherr provides. The combination of our 114-metre main boom with a luffing jib extended from 84 to 114 metres will enable us to assemble a complete boom with a length of 228 metres. We intend to use this to erect a 178-metre tower at the DOS BOCAS refinery,” adds Santos. The new 114 metres luffing jib for the  LR 11350 underwent testing at the Liebherr production plant in Ehingen at the start of February.

The main features of Liebherr LRT rough-terrain cranes are their high performance and safety during crane operations. These features are assisted by their easy operation and standard VarioBase®. The high comfort level is another factor behind their safety. The extended cab can be tilted and this, together with its clear, self-explanatory control units, ensures that the crane is easy to use. The sturdy,  manoeuvrable crane also delivers excellent off-road handling. Its dimensions and weights have been adjusted for easy transport to ensure low-cost global mobility.

Liebherr and ESEASA in Mexico City

Liebherr Mexiko S. de R.L. de C.V. is located in Mexico City where it is responsible for sales and service of mobile and crawler cranes in Mexico, the Caribbean and Central America. ESEASA’s head office is also in Mexico City. The group mainly works in the energy sector (wind power and oil industry)  and has specialised in engineering, logistics and crane assembly for large projects in Central America and the USA.