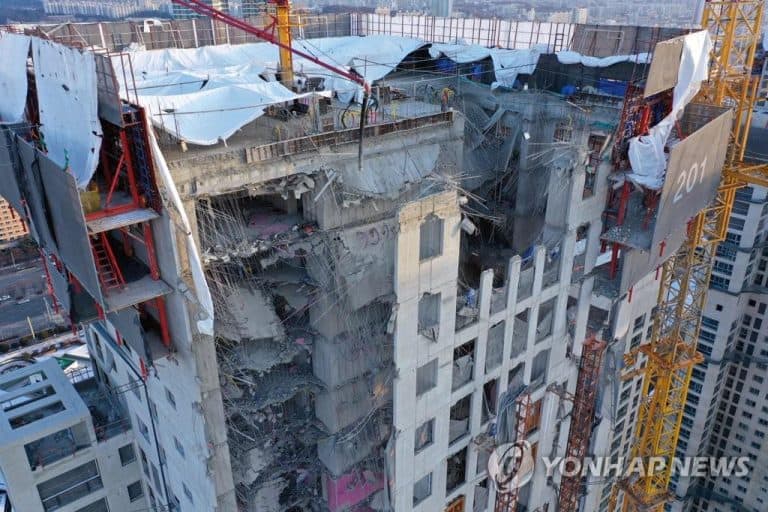 At 3.46 pm on the 11th Jan, A part of the Hwajeong Hyundai I-Park Building 201 which was under construction, the outer wall of a high-rise apartment building under construction has partially collapsed. It has been mentioned that the contractor was Hyundai Development Company.

Concrete pouring works were being carried out in full swing on the 39th storey of the building using a concrete pump. Suddenly, the workers heard a loud sound and the supervisor at the scene saw one of the tower crane’s wall tie has fell off and hanging in the air.

A video was filmed to report the slow sinking concrete which the formwork was raising.

The building collapsed started from the 39th storey, drilling down in a T-shape till the 23rd storey, a total of 16 stories below.

The precast outer wall crumbled into debris, plummeted to the ground 50m below, creating a cloud of enormous dust and damaging at least 10 vehicles in the surrounding.

Six people has been rescued from the building while another six construction workers went missing while losing contact after the collapse and though a night search operation was being carried out. However, it was suspended after fears of the collapse of the unstable tower crane which was 140m tall, holding back only with the tie-backs.

It has been known that the six missing workers were in charge of windows installation, plastering and firefighting equipment construction on the upper storey.

An evacuation order was issued for 200 residents of nearby households, as well as two shopping malls near the collapse zone. Electricity and water have also been cut off in the residential and commercial buildings.

The rescue search team was not able to enter the building due to the risk of further collapse at the accident site and only two rescue dogs were dispatched.

The rescue search resumed in the morning after a safety check. Six rescue dogs and a rescue team when inside the building to look for the missing persons, but the search operation was suspended as the sky gets dark. Although a rescue dog searching the interior showed a specific reaction on one of the floors, no one has been found.

Among experts, there is an analysis that there is a high possibility that the outer wall collapsed as the ‘lateral force’ (a force acting in the direction perpendicular to gravity) acted while the tower crane was fixed to the exterior wall of the apartment and crossed the threshold.

Hyundai Development Company (HDC) has been building residential and commercial apartment complexes in the 23-27 area of ​​Hwajeong-dong, Seo-gu, since 2019. There are 7 buildings in total, 4 stories below the ground and 39 above, with a total of 847 households including 705 apartments and 142 officetels.

There are convenience facilities such as terminals and department stores near the construction site of the new apartment building.

Prime Minister Kim Bu-gyeom on the afternoon of the same day issued an emergency instruction regarding the collapse of a new apartment building construction site in Gwangju, saying, “(Relevant agencies such as the National Police Agency) will quickly identify the whereabouts of construction site workers whose safety is not confirmed and prevent further damage from occurring. “Measures must be taken for the safety of rescue workers and nearby residents,” he said.

Hyundai Development Company (HDC) has announced that the tower crane would be dismantled partially to prevent any further collapse of the building.

At a briefing conducted in the morning Hyundai Development Company (HDC) Safety Management Office ManagerMin Seong-woo explained that they have decided to dismantle the tower crane partially, removing the unstable parts of the tower crane which are missing bracings. Only a part of the upper mast such as the boom, cabin, counterweight jib will be dismantled to keep the retaining wall structurally safe.

In the initial planning phase, the mobile crane was to be assembled on the 15th of Jan and the tower crane was to be partially dismantled on the 17th of Jan. However, due to the expert safety advice and the exercise of rights to stop work by the field workers, the schedule was delayed and instead to be completed by 21st Jan. (According to Article 52 of their Occupational Safety & Health Act, they have the right to stop work and evacuate if there is a risk of an industrial accident.

One in six missing persons was found on the stair railing on the first basement floor of the building. He was found while searching the basement using an endoscope.

At around 6:49 pm, one worker in his 60s, one of the six missings, was found dead on the first basement floor of the collapsed building.

The dismantling of a tower crane (145 m) standing precariously at the construction site of the Hwajeong I-Park apartment building in Seo-gu, Gwangju, where the collapse occurred, is scheduled to be delayed by five days due to the exercise of workers’ right to stop work.

The Gwangju Disaster and Safety Countermeasures Headquarters held a press briefing at 10 am and said, “The dismantling of the tower crane was supposed to be completed by this Sunday, but due to expert safety advice and the exercise of the right to stop work by the field workers, the schedule was delayed and completed by the 21st. planned,” he said.

According to Article 52 of the Occupational Safety and Health Act, the right to stop work is the right to stop work and evacuate if there is a risk of an industrial accident.“We tried to install a mobile crane and dismantle the tower crane at the same time, but we changed it to a method in which a basket was attached to the mobile crane and a person reinforced the existing tower first in the basket” said

Director Min also said, “The measurement work related to retaining walls was measured at 15 places every 30 minutes yesterday, and the maximum variation occurred about 9 mm. Experts have determined that it is acceptable within the existing building variant, but the risk of the collapse remains to be seen,” he added.

Prior to Chief Min, Hee-jun Moon, head of the Western Fire Department in Gwangju (Head of the Seo-gu Emergency Rescue Control Group) also gave a briefing and said, “Eight rescue dogs and 85 rescuers have been dispatched today to rescue and search from 7:30 in the morning.” We will continue to carry out debris removal and rescue operations centred on the place where the buried person came out,” he said. The rescue dogs put into the upper floors of the building have not achieved any special results so far.

Ahn (45), interim representative of the Missing Families Countermeasures Committee, said, “Hyundai Industrial Development has been passive in the search because of equipment failure. The funeral of the victims will not be supported by Hyundai Development Company. We plan to respond in cooperation with the families of the schoolchild accident victims and civic groups,” he said.

The mobile crane will fix the luffing jib to a total lifting height of 120m and is scheduled to be put into operation on the 17th after the ground reinforcement has been completed.

The priority of the lifting would be reinforcing the tie-back back to the building to prevent it from collapsing during the partial tower crane dismantling. It was estimated that the fixing of the tie-back will take about two days and the search team can enter the upper stories to conduct a full-scale search.

At the same time, they are in the process of restoring the power supply so that the tower crane installed in the adjacent building can also assist in dismantling the demised tower crane.

Chung Moong-gyu, the chairman of the South Korean construction firm HDC Hyundai Development Co, annouced that he will stepped down from his role.

It was a second serious incident within a year for HDC, top 10 housing developers in South Korea. Nine people died and eight were injurreed when a five-storey building being demolished collapsed in June last year, also in Gwangju.

The countermeasures headquarters set up a forward command post on the 20th floor to search the upper floors of the collapsed building, where the missing persons are likely to be buried. The forward command post will be used as rescuers resting place and storing equipment necessary for the search.

The task force headquarters dispatched a search team centred on the relatively safe section of the 22nd floor and above to search for missing persons using state-of-the-art equipment such as endoscope cameras and video detectors.

The search and removal of risk factors such as internal debris are being carried out in parallel, and lifesaving dogs were deployed to re-search the wreckage yard.

The dismantling of the tower crane has finally gone into operations on the 11th day of the incident, starting at 8 am in the morning. A total of 2 units of 1,200-tonne mobile crane and a tower crane at the current job site has participated in the crane recovery.

The task force was concerned about unexpected accidents during the tower crane dismantling and has designated a 79m radius of the demised tower crane as a hazardous area. An evacuation order was issued and controlled human traffic around the precinct has been ordered with cooperation from the police. The rescue team has also pulled out temporary to wait for the completion of the dismantling.

It has been planned that after the dismantling work is completed, they will proceed to carry out exterior wall stabilization work and a steel structure would also be installed on the 31st and 38th floor on the central wall to prevent further collapse of the outer wall.