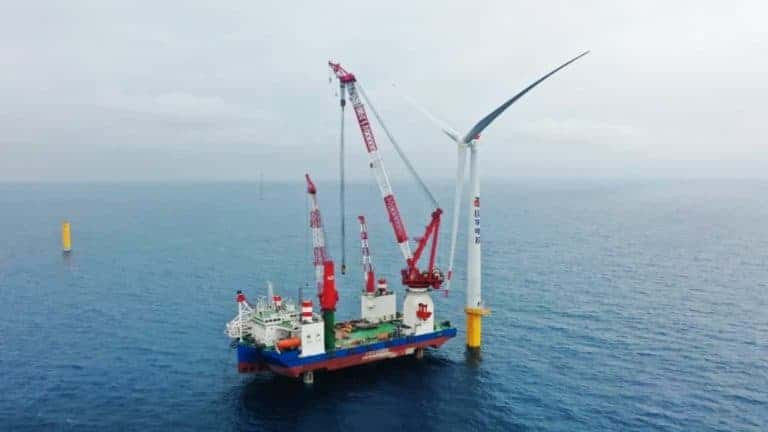 As jack-up vessel “Zhenjiang” slowly lifted the accurately docking the 158m diameter wind blades the nacelle at an altitude of about 110m, the Jieyang Shenquan Offshore Wind Power Project successfully completed the installation of the first wind turbine, also marking its first lift after its comeback.

The “Zhenjiang” jack-up installation vessel suffered a catastrophic accident whilst installing turbines at the CSIC Jiangsu Rudong H3-1 300 MW offshore wind farm in China. The vessel’s jacking system failed during turbine installation. As result, it was flooded, and has been rendered unusable.

On the evening of 7th April 7 2021, the “Zhenjiang” vessel set off from Zhoushan, Zhejiang, sailed for thousands of kilometres into the seas of Jieyang, Guangdong, and started offshore construction tasks. Participating this time is the Shenquan Offshore Wind Power project of Guangdong Jieyang State Power Investment Corporation, which was constructed by Huadian Heavy Industry.

The Shenquan Offshore Wind Farm is located in the East of Guangdong Sea in the South China Sea. The sea area to which has stormy waves. It has very high requirements for vessel operation ability and personnel operation skills. Before was the operation schedule of the jack-up vessel.

About The No. 37 Model Wind Turbine

The No. 37 wind turbine model that has been successfully hoisted this time is a 5.5MW capacity unit with the blade length measuring 76.6 metres and overall blade diameter of 158 ​​metres. The height to hub centre approximately about 106 metres, with the rotor weighing at 201 tonnes and the nacelle weighing at 242 tons. The blade and the rotor are pre-assembly on the hull deck before hoisting it for installation.

With stormy waves and unpredictable weather conditions at Shenquan waters, the project team’s uses scientifically data and precision to complete the job. It is understood that after the completion of the project, it can provide 1003.33GWh of clean power to the power grid annually, and reducing CO2 emissions by about 780,000 tons per year.

With the large-scale development of offshore wind power, factors such as water channel congestion (like what we see in Suez Canal incident) and environmental protection is increasing throughout the world. It provides a better advantage that wind mill are built in the deep sea, which eventually will become the mainstream for offshore installation and maintenance platforms. Therefore, the “Zhenjiang” “When you come to deeper seas, you can give full play to its multiple advantages, such as deep working seas, high construction efficiency, and long operating windows.

Why Zhenjiang Is A Better Performer

According to statistics, there are currently about 40 construction vessels in China, of which 22 are self-propelled jack-ups, and offshore platforms that can work at a water depth of 50 meters are even more scarce. There are no more than three of such vessel including “Zhenjiang”.

As more competitors are rushing into offshore wind power installation projects, “Zhenjiang” has announced its re-entry, which will greatly alleviate the shortage of high-end construction equipment, and contribute to the growing development of China’s offshore wind power for China’s 14th Five-Year Plan period.