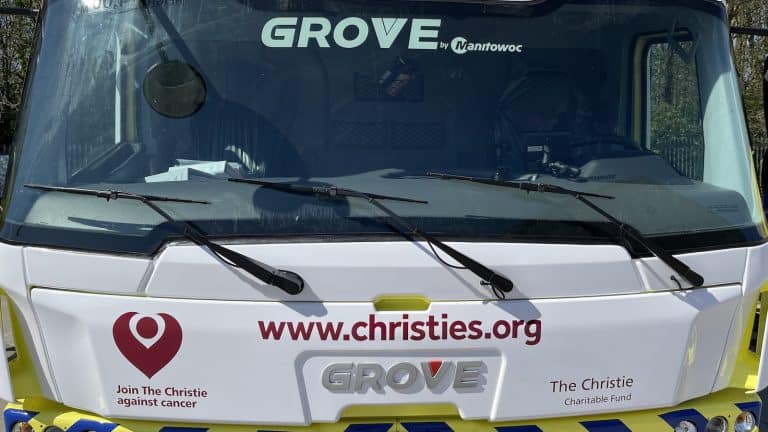 Since Liverpool and Manchester-based John Sutch Cranes took delivery of the UK’s first Grove GMK5200-1 from Manitowoc in July 2020, the five-axle 200 t all-terrain crane has proved a very busy model for the mobile crane rental and contract lifting specialist.

The compact size and interchangeable counterweight slabs have enabled it to complete a broad range of 100 to 200 t capacity jobs, including glazing, petrochemicals and telecommunications, as well as general construction. Most recently, the GMK5200-1 spent six weeks installing turbines at a wind farm in Scotland.

Based on this success, John Sutch Cranes has now added a second Grove GMK5200-1 to its 36-strong fleet with a special livery to raise awareness and funds for the vital cancer care provided at The Christie Hospital, close to the Manchester depot.

“The GMK5200-1 is a fantastic crane and very versatile. Its compact size means we can send it out as a smaller crane, instead of a 160 tonner, for example, and get more use from it. Given how busy it has been, it made sense to add a second unit to our fleet,” said Paul Parry, sales manager at John Sutch Cranes.

“And we are really excited to use this new crane to do our bit for Christies,” he continued. “It’s a big crane that will travel up and down the motorway to jobs all over the country so will be seen by a lot of people – and the Christies livery looks absolutely great.”

A crane that cares

Over the next three years, John Sutch Cranes will pledge a percentage of the rental income from the new GMK5200-1 and encourage its customers to also make a donation to The Christie Charity, which supports the provision of services over and above what the NHS is able to fund at the hospital.

“Almost everyone is touched by cancer in some way and Christies is close to the heart of many of our staff at John Sutch Cranes. Like many charities, its usual income has been affected over the last year and we want to give a little back,” he said.

Anna McIntosh, major relationships development manager at The Christie Charity, said: “We are absolutely thrilled with the support from John Sutch Cranes. This advertising highlights the everyday work of The Christie, talking about saving lives, making breakthroughs, holding hands, wiping tears, lifting spirits, raising funds, ringing bells and beating cancer. This crane will be seen throughout the UK and will raise essential awareness of the charity. We are really looking forward to working with John Sutch Cranes to make a huge success of this opportunity.”

Fittingly, the new GMK5200-1 all-terrain crane’s first job was at Great Ormond Street Hospital in London, with customer Clarke Energy also making a donation to The Christie Charity. The crane was tasked with removing a CHP (combined heat and power) generator for its 60,000 hour service and will return in a few weeks to replace it.

“The uptake so far has been fantastic and we have lots of bookings for the crane. There isn’t a set amount we would like customers to donate but whatever they can contribute will be much appreciated and make a real difference to the lives of people in our community,” Paul concluded.