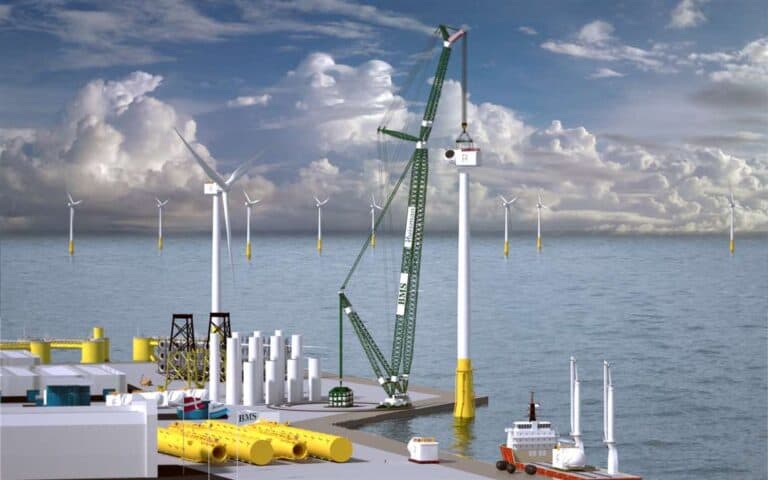 BMS signed up for the new giant on 6 January 2022. A primary application for the crane will be to help load wind turbine components onto foundations and offshore vessels.

A ceremony to mark the start of production was held in mid-June at Huisman’s production facility in the Czech Republic. The first two pieces, of S690 grade steel, were welded together using a robotic system.

Huisman also uses wire and arc additive manufacturing (WAAM), to make some components, including hook blocks. It is basically a 3D printer that works by building up layers of weld. Using this method mid-size to large components, with complicated shapes, can be produced from high tensile steel. A major benefit of 3D printing, Huisman says, is it significantly reduces delivery time at a price to compete with forgings and castings. Quality is also consistently high, Huisman said.

Delivery of the crane is scheduled for the second half of 2023.

The fully electric crane will be able to lift 1,200-tonne components to a height of 225 metres. Loads up to 3,000 tonnes will be handled but at a reduced height.

About the new ring crane

Heavy crane and engineering specialist Huisman will build the Ringer Crane for BMS Heavy Cranes which has an option to take a second unit.

All the new Huisman Ringer Crane’s drives are electric which minimises harmful emissions at the point of use. The manufacturer said it also improves operational accuracy and energy efficiency to further ensure suitability for the renewable energy industry. It has a modular ring design so it can be rigged with a full 360-degree circle or just a segment, according to application, space, site layouts and so on.

Huisman said it is easy to relocate and to break it down into manageable loads for transport. Also, upending the crane can be done without assist cranes. Low ground bearing pressure is another feature of the design and it can be operated in higher winds than traditional cranes, Huisman said.

Huisman is known for cranes with stiff but lightweight booms and other structures. The company first proposed a super heavy-lift ring crane design in August 2013 with the Huisman Compact Ringer Crane (CRC). It was featured on the front cover of the September 2013 issue of International Cranes and Specialized Transport magazine.

This new crane for BMS is based on the CRC design, further developed to make it suitable for handling larger turbines.

Morten Kammer, BMS Heavy Cranes CEO, said, “We look forward to the ongoing co-operation with Huisman in the delivery of this crane. This asset represents a major step forward for BMS. With the capability to lift the world’s largest turbines onshore we will be able to play an increasingly important role in the development of renewable, net-zero energy industries.”

David Roodenburg, Huisman CEO, said, “We are passionate about designing large cranes and are grateful to BMS for the opportunity and their trust. We can’t wait to see this mega crane in real life. We are happy to once again be applying our experience in a project that aligns with our vision of accelerating the growth of renewable energy production.”