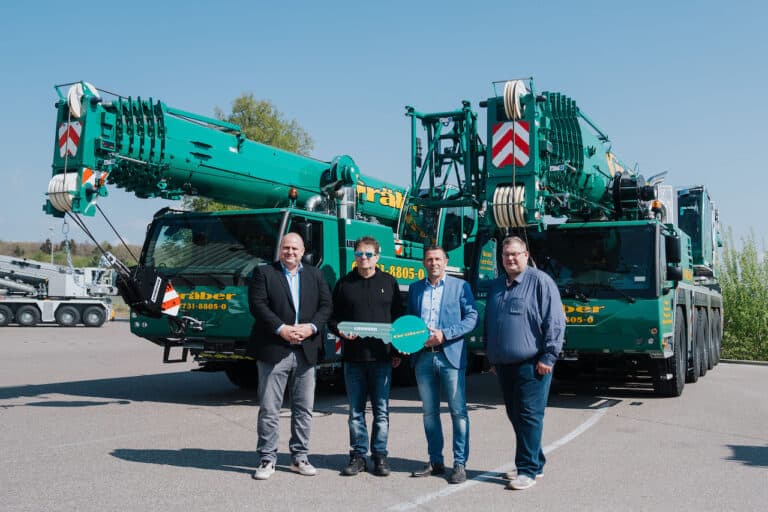 Work platform, forklift and crane rental company Gräber took delivery of two new mobile cranes at the Liebherr plant in Ehingen at the beginning of May. Just a few weeks earlier, Liebherr delivered an LTC 1050-3.1 to the group based in southern Germany. These will be followed by a MK 140 mobile construction crane in summer and an LTM 1090-4.2, which is due for delivery in autumn. Gräber only uses mobile cranes from Liebherr and continuously updates its fleet to ensure its machines are all state of the art.

“We founded our company in 1998 and started by renting out work platforms and forklift trucks. They are still our main source of business. Then, when we had established ourselves on the market, we started renting out mobile cranes in 2013 and since then we have been able to provide the complete package. We have relied on Liebherr cranes from the very beginning”, says company owner Alexander Gräber.

Currently, the Gräber Group, which has several outlets in southern Germany, particularly around Lake  Constance, has seven mobile cranes, all of which were supplied by Liebherr. It is important to the company to keep its fleet right up to date. Thomas Gebhardt, Finance Director and member of the Board of Directors, continues: “This year we have already taken delivery of three new Liebherr cranes and we have placed orders for two more. Liebherr’s crane technology is innovative and the support the company  provides after the crane purchase is outstanding.”

The two latest cranes will supplement the fleet in sectors in which the company previously did not have perfect machines. “We bought the LTM 1070-4.2 at the request of our dispatcher because we did not have a taxi crane which could drive on public roads carrying ballast”, adds Gräber. With an axle load of  12 tonnes, the LTM 1070-4.2 can carry up to 10.7 tonnes of ballast and can therefore complete the majority of its jobs without requiring additional ballast transport vehicles. The maximum ballast on the Liebherr 70-tonne crane is 14.5 tonnes.

Authorised Signatory Jörg Rössler explains the decision to buy the LTM 1150-5.3: “We will mainly use the 150-tonne crane for assembling prefabricated concrete components. It delivers the performance for this job and we audited with a second hoist gear. That enables us to turn the components into the correct position with ease during the assembly process. The LTM 1150-5.3 fits perfectly in the gap between our  100 and 230-tonne crane, which is the largest model we have.”

At a length of 66 metres, the LTM 1150-5.3 has one of the longest telescopic booms in its class. The  Liebherr 150-tonne crane can complete a large number of jobs without requiring any additional ballast to be transported because it can be driven on public roads with nine tonnes of ballast.