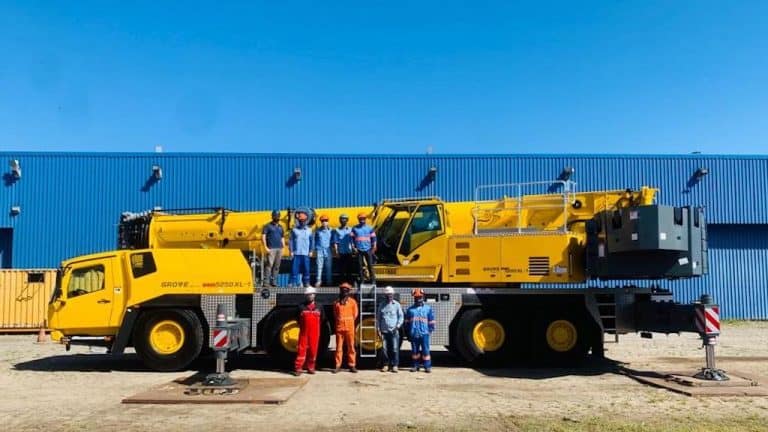 Since its founding in 1979, Brazilian lifting and cargo handling company Sistermi has acquired an enviable portfolio of projects, serving some of the largest mining, energy and steel companies in the country. To continue to lead the way for lifters throughout Brazil, the company has just invested in one of Grove’s most capable and modern cranes, the GMK5250XL-1, with a capacity of 250 tonnes.

Manufactured in Germany, the GMK5250XL-1 is the first of its kind to arrive in Brazil and South America. According to Aarão Boechat Martins, CEO of Sistermi, the decision to invest in the crane is part of the company’s strategy of constantly renewing its fleet and staying ahead of market demands.

“We have started a process of renewing our fleet, and Manitowoc has been one of the first companies we have worked with on this project,” Martins said. “We have spent the last few years without making major investments, and now we have resumed the process to ensure that we can continue to be a reference throughout the country in the areas of cargo handling and hoisting.”

The crane was delivered to Sistermi’s headquarters in Serra, Espírito Santo, in July of this year and almost immediately headed to the Port of Vitória, where it assisted in maintenance work. The crane is expected to perform other jobs soon. According to Martins, at the time of delivery, operators and engineers praised the systems and on-board computer of the GMK5250XL-1, mentioning the standardized CCS (Crane Control System) operating system, available in almost all the brand’s crane lines.

In recent years, Martins and his team have had the opportunity to visit Manitowoc factories in both the United States and Germany, which has helped the businessman consolidate his confidence in the brand and invest in rough terrain and all-terrain cranes, as well as Carrydeck industrial cranes.

“During the visits, we were able to see the constant improvements in the production lines and the development process of the cranes, and most importantly, the occasion gave us the opportunity to offer suggestions directly to Grove’s technicians, improvements that made a difference,” he said.

As for after-sales assistance for cranes, Martins said that a machine is only “as good as the technical assistance that the manufacturer offers.”

“Machines and equipment can be good, but if there is no competent parts replacement and service, they become a problem,” he said. “Local support is extremely important, and we have had a constructive partnership with Grove and Manitowoc in Brazil. Grove is a brand with quality to look out for.”

According to Martins, his team of operators and maintenance engineers, in addition to having followed Grove’s evolution over the past few years, did a detailed evaluation of the GMK5250XL-1 and concluded that it would meet the company’s job requirements.

“Grove’s reputation and the high technology of the GMK5250XL-1 model, in addition to the technical assistance we have received on other models of the brand, were definitive in our decision to purchase,” he said.