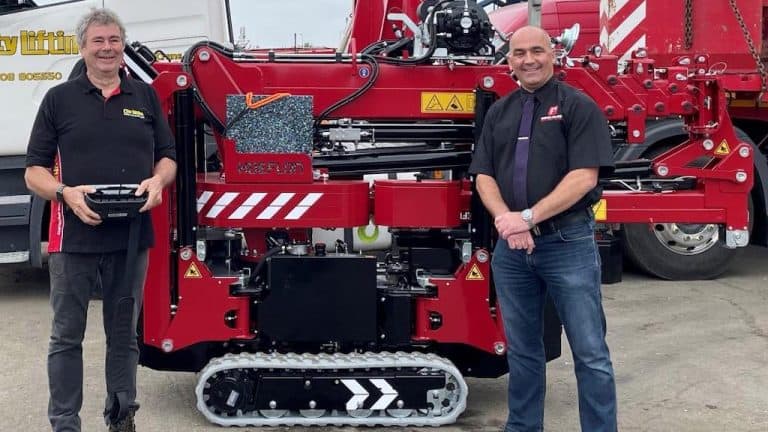 The new Hoeflon purchased through UK distributor Foster Cranes, has a five-section 9.5-metre main boom topped by a three-section 4.3-metre telescopic luffing jib for a maximum radius of up to 14.4 metres. At this radius, it can handle 211kg while the jib can also luff around 15 degrees above the horizontal boom.

The maximum tip height with the jib installed is 16.4 metres, at which it can handle 601kg. It also luffs down to the horizontal with the boom fully elevated at which point it can manage 400kg at a radius of 5.5 metres. The outriggers have numerous setup positions with step-less extension and automatic monitoring that provides a load chart to suit the actual configuration.

The C6e has an overall stowed width of 750mm but once on site, the non-marking rubber tracks can extend to just over a metre wide, for additional stability. The overall length is just over three metres, with a height of 1.77 metres. The total weight is 2,850kg with all options included or 2,650kgs for the standard machine. As are result it is possible to transport it on a two-axle equipment trailer.

The C6e uses a LiFePO4 lithium phosphate battery pack which is said to be less heat sensitive and will not ignite or explode during charging or discharging. It offers the same advantages as lithium-ion in that it has a long lifespan and will withstand frequent discharges and recharging without losing performance, but is said to be more environmentally friendly as it does not contain toxic heavy metals.

It will run at a 60 per cent duty cycle pace for eight hours and can be recharged from empty to full in five hours on a standard AC outlet. It is also possible to operate the crane while it is plugged into the mains, allowing recharging at the same time as operating. The electric version also offers the same speeds and performance as the diesel model.

“Trevor Jepson of City Lifting said: “The Hoeflon is a fantastic crane with lots of new ideas and features. The Japanese machines from Maeda and Unic are really good, but they have not changed much in 10 years or more in terms of new features.

The Hoeflon does everything you want a crane-like this to do and more. Everything is fixed on the machine, so no need to go around the site looking for parts or auxiliary equipment, nothing gets left behind. It is also very easy and nice to drive with fantastic remote controls with full readout that Hoeflon makes themselves.”