Truck Crane Tipped Over Onto Building Under Construction in Dorchester 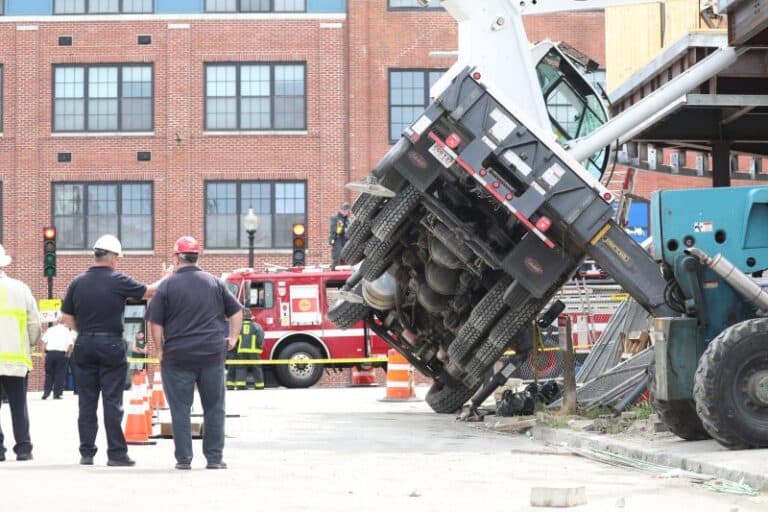 A crane toppled onto a building at a construction site in Boston’s Dorchester neighbourhood Tuesday morning (26th July 2022).

The incident was reported shortly before 10 a.m. at East Cottage and Dorchester avenues.

Surveillance video showed the crane toppled over while lifting trusses from a truck to the second story of the building when the weight apparently became too much. No one was hurt.

Yad Malij, the driver of the delivery truck, was watching from across the street and said at first everything looked fine.

“All of a sudden, the machine went down,” he said. “The boom went down with the freight. The speed went up at first. He was coming slowly down. After that, the speed went up and like faster than it should be and there were some workers, but everybody was safe.”

Emergency responders said they were prepared for technical rescues that were not ultimately needed.

“Very lucky, very lucky,” Boston Fire Deputy Chief Michael Hocking said. “Luckily there weren’t a lot of people working underneath the operation today, and so today was a good day as far as nobody got hurt.”

Raymond Garcia, an Iraq war veteran with medical training who lives nearby, heard the crash from his apartment.

“I ran down thinking somebody might need some help, but I heard the sirens coming in,” he said. “I asked the first paramedic that I saw that there were actually no injuries, so that was like the main thing.”

The NBC10 Investigators looked into the safety record of the company operating the crane and found just one violation in Raynham, Mass. in March of 2020 when they paid $2,000 in fines. That was the only issue found in a check of the last 10 years, in Massachusetts or Rhode Island.

Crews were still working to right the crane and remove it Monday evening.

“It’s going to be a lengthy process to remove the crane. It’s going to take a long time to crib up the tires, etc.,” Boston Fire Deputy Chief Michael Hocking said.

Boston Mayor Michelle Wu said she’s grateful no one was hurt in this accident but adds there have been far too many of these types of incidents recently.

“This remains a topic of priority of how we can ensure safety through inspections, through oversight of every single work site in the city,” Wu said Tuesday.

One of those recent incidents, a collapse at the Government Center parking garage, was deadly. Peter Monsini, a 51-year-old demolition worker who was operating a construction vehicle, was killed in March. In May, a collapse at the Edison Power Plant in South Boston left Wilson Ortega, 34, without his legs.

PrevPreviousTeen in a serious condition after being run over by crane in Australia
NextSupreme Court overturns acquittal; orders retrial of Makkah Haram crane crash caseNext