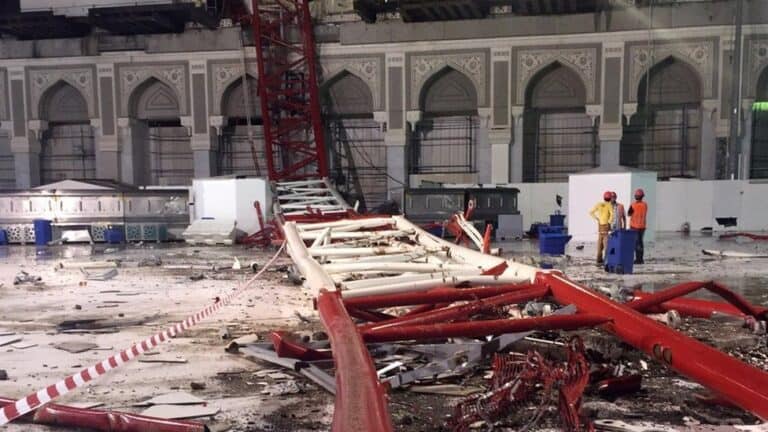 Saudi Arabia’s Supreme Court has overturned the acquittal of the defendants in the Grand Mosque crane crash case and ordered a retrial of the case, Okaz/Saudi Gazette has learnt. The court’s order came seven years after the Haram crane accident, which claimed the lives of 108 people and injured another 238 when a crane involved in the Haram expansion project crashed on Sept. 11, 2015.

The Court of Appeal upheld on Aug. 4, 2021, the verdict of the Makkah Criminal Court to acquit all the defendants in the crane crash case. In December 2020, the Criminal Court issued its verdict for the third time, acquitting all the 13 defendants in the case, including the Saudi Bin Laden Group. The court clarified then that it found nothing new except what it had ruled earlier and that it will send the copy of the verdict to the Court of Appeal to decide what it deems fit.

In an earlier verdict on Oct. 1, 2017, the Criminal Court had acquitted all the 13 defendants who were charged with negligence. The Makkah court had also ruled that the disaster was caused by heavy rains and thunderstorms, rather than human error or fault.

The First Circuit of the Supreme Court decided to overturn all the verdicts issued by the Criminal Court and the Court of Appeal in the case of the Haram crane crash accident. It ordered that all the cases shall be reexamined by a new judicial circuit and that the circuit shall not include any one of the judges who had previously considered the case.

The Supreme Court has informed the defendants, the Court of Appeal, and the competent authorities about its new decision. According to sources, the Supreme Court held its session in the presence of 10 of the accused while three defendants or their representatives failed to attend the session. The Supreme Court circuit ordered to resume the trial of the case in the absence of these defendants.

In its decision, the Supreme Court stated that it examined various aspects of the case as well as the investigations conducted over the incident and the rulings issued in this regard. It reviewed the request of the Ministry of Finance to remove the crane as it was no longer needed. The court noted that the defendants had also not submitted evidence for allowing the crane to remain erected there with an explicit written directive from the project owner or the supervising consultant.

The court also pointed out that it was not sufficiently verified that the crane’s arm should remain raised and not be lowered, given that the time of the incident was the peak Hajj season, which is the period specified for stopping work in order to ensure safety and security of Hajj pilgrims and Umrah performers.

According to the court, the accident points to the lack of the required highest degree of precaution for the lives of the pilgrims during the peak Hajj season and also in the wake of the fluctuations of weather conditions during that period. “It was found during the consideration of the case that there was insufficient research regarding the existence of an alert regarding the weather situation related to the incident in terms of wind direction and speed when this alert was issued and how it was communicated to the stakeholders,” the court said.

The Supreme Court noted that in its previous decision, it had warned of the necessity of scrutiny and investigation with everyone who appeals for his negligence in removing the crane from the site crowded with human souls and frequented by Muslims from everywhere. “If the accountability of other persons is established, they shall be dealt with in accordance with what was decided by Article 19 of the Law of Criminal Procedures,” it said.

The court also pointed to the indictment that stated that some of the workers operating and installing the cranes and the inspectors working on the site lacked competence. There were workers authorized to operate the cranes even though they are illiterate, and no documented evidence was provided to the investigation team to prove their level of competence and training. The main contractor was accused of failing to verify the competence of the workers to operate, load and handle due to the multi-nationality of the workers and their languages, the varying levels of their competency, and the absence of a clear training program for them.

The indictment also pointed out that the crane operator did not provide specific information about the wind speed at which the cranes should be turned off. In the days before, the Presidency of Meteorology and Environmental Protection predicted the possibility of wind blowing, but no action was taken, indicating poor communication and follow-up by the safety officials.

Also, the crane operator and safety officials were not provided with a weather forecast, which is necessary for the operation of the cranes. While the crane operating manual was not present in the crane cabin, the regulation also pointed out that the previous months of the accident witnessed a number of accidents that occurred or almost occurred and the matter passed without corrective measures taken on the ground or lessons learned, and no warning publication was issued.

The indictment also indicated that no accusations were brought against individuals affiliated with entities, while an independent case was filed against one of the accused who left the Kingdom and did not return to the Kingdom.