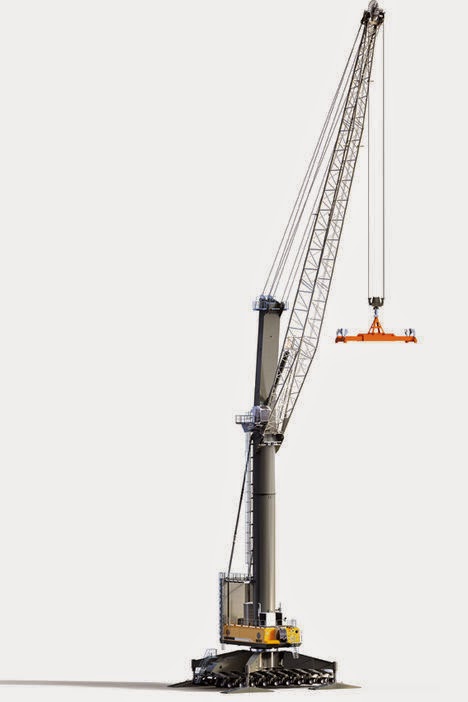 Liebherr Maritime Cranes has launched its new 308 tonnes flagship mobile harbour cranes – the largest in its seven model LHM range. The LHM 800 has a maximum capacity of 308 tonnes and a maximum radius of 64 metres, offering 100 tonnes more capacity than the next model in its range. It is able to handle container vessels up to 22 rows across.

The harbour mobile crane has hoist speeds of 120 metres a minute, which was able to handle 38 containers in an hour using standard configuration as claimed by Liebherr. When equipped with Liebherr’s Pactronic hybrid power booster, it can handle up to 45 containers in an hour as well as up to 2,300 tonnes of bulk handling per hour. When fitted with Liebherr’s Sycratronic software, two units of LHM 800 is capable of handling a tandem lift of up to 616 tonnes.

Weighing at 745 tonnes, the new crane shares the same X-shaped undercarriage use through the LHM range, while the wheel sets have been slightly adapted to provide better load distribution. Mounted on a rubber tyred undercarriage, the LHM 800 can also be mounted on a rail, fixed pedestal or a barge.

Matthias Mungenast, sales director of Liebherr mobile harbour cranes, said: “The LHM 800 is a breakthrough for the mobile harbour crane sector, outperforming the existing maximum lifting capacity by nearly 50 percent. Also, in terms of container and bulk handling, the LHM 800 is the new benchmark. We are optimistic that this new model will strengthen our marketing leading position.”

Montecon placed order for the first LHM 800 which was scheduled for delivery in 2016. Juan Olascoaga, Montecon general manager said: “We are proud of being the first terminal worldwide which is going to operate the world’s largest mobile harbour crane in container handling configuration. No mobile harbour crane ever before provided an eye level of more than 40 metres, which truly eases and speeds up the handling of large container vessels.”

Montecon took delivery of its first Liebherr mobile harbour crane in 2001 when it purchased two LHM 400s. Three years later they purchased the first LHM500 in Uruguayan followed by a second in 2006. In 2012 and 2013, Montecon invested once again and ordered three LHM 600s, which was the largest model in Liebherr’s range at this time.