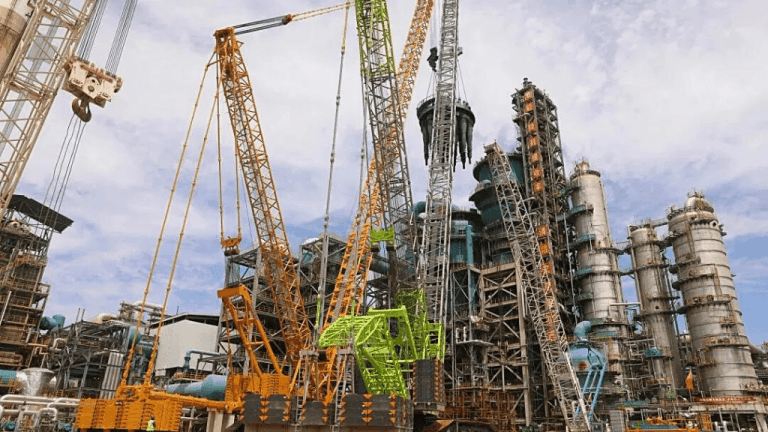 Shaanxi Petroleum Chemical Engineering and Construction Co., Ltd (SPCECC) has reached a milestone on 17th June 2021 at the Yuneng Chemical plant turnaround project when they successfully hoisted down the reactor head for the modifications works.

The chemical reactor, with 12 reactors nozzles attached was hoisted out using two units of 2,000-tonne crawler crane in tandem heavy lift. The total load weighs 628 tonnes and the required lifting height was 87 metres.

These two units of 2,000-tonne crawler cranes are the XCMG XGC28000 and Zoomlion ZCC32000W, which both are mobilised with main boom configuration with back mast and superlift trays.

After numerous early stage planning and lifting designs, including inviting domestic industry experts, the final decision was to use two units of 2,000 tonne crawler for the dismantling operations.

The company uses force analysis and BIM technology to simulate the lifting process and also run through a field simulation exercises to review and identify difficulties and hazards that they might faced during the actual works. Subsequently, improvements and preventive measures are added to ensure a smoother lifting operation.

In order to remove the reactor head with the nozzles, it increases the structurer complexity and furthermore, given the large head shell diameter (inner diameter 13.6m) and high reach, it increases the difficulties in the lifting operation.

They also have to consider unforeseen factor including additional weight from internal carbon and coking parts, as well as falling parts from the dismantling process.

Due to a tight schedule, the works is carried out round the clock. After receiving the permit-to-work, the actual operations commenced at 10.30 am in the morning.

The two mega crawlers simultaneously lifted the reactor head 0.5m from the column and rotated to re-adjust the lifting points. Under the commands from the lifting commander, both crawler slowly moved back at the same time and slowly the reactor head onto a temporary prefabricated frame. The entire operations took up to four hours to complete the hoisting.

First of the kind lifting planning

It is reported that it is the first time in China’s domestic market that they have approached this method for lifting and created a record of its own. SPCECC has once again demonstrated their strength while also being a company that has been in China’s Top 10 Lifting Companies for the ninth consecutive years.