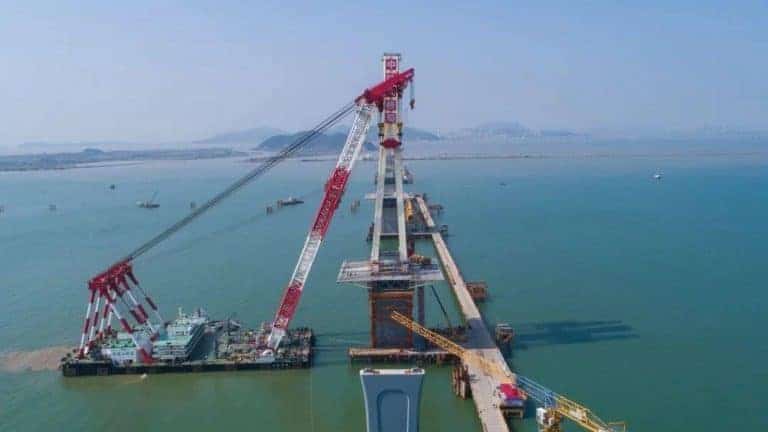 At 11:38 am on February 19th 2021, the floating crane vessel “Bridge Seagull”, with a lifting capacity of 3,600 tons, has successfully installed the 106 meters high steel main tower in a five hours operation. The 3000-ton steel tower was successfully hoisted to the nearly 50-meter-high pier steel beam. It was the first main tower of the Zhuji Intercity Jinhai Avenue Bridge has been successfully hoisted.

For the first main tower of the Jinhai Avenue Bridge, the entire tandem vertical rotation process is divided into 73 steps.

With the help of the double-boom floating crane vessel “Bridge Seagull”, currently China’s largest lifting capacity and the highest lifting height crane vessel in the country, the steel main tower, which was originally transported horizontally on the sea surface, was tandem lifted and fitted onto the pier in a precisely engineered move.

In order to save time during the construction period, the construction team has decided to adopt vertical installation in the air instead of constructing the tower in sections. It is the same lifting methodology that is applied to Hong Kong-Zhuhai-Macao Bridge’s river-sea direct ship channel bridge (ie, the “Dolphin Tower”).

The erection of the main tower is the responsibility of the China Railway Bridge Bureau, the construction unit of the Jinhai Avenue Bridge. The first “Y”-shaped main tower erected is located at Pier 26 of the Jinhai Bridge, which is at the mouth of the Modaomen Waterway of the Xijiang River. The height of the steel structure main tower being hoisted is 106.8 meters and the total weight is 2,699 tons. The steel main tower is manufactured in the factory and then shipped to Zhuhai for erection.

As mentioned by the chief engineer of the construction project, they have engaged in four layers of safety assurance to ensure the lifting operation goes smoothly. Firstly, a detailed lifting plan has been developed to ensure each and every step is carried out in precision.

The second safety assurance is the deployment of Bridge Seagull vessel crane, the largest lifting capacity and the highest lifting height in China developed independently by the “Bridge Seagull”;

The third assurance is the development of an intelligent control system for the main tower, which controls the aerial posture of the steel tower during the erection process through digital visual intelligent monitoring technology;

The fourth assurance is conducting a trial lifting operation before commencement of this actual operation.

The Bridge Seagull crane vessel had transported the steel tower to a height of 1 meter from the top beam of Pier 26 and as the view of the captain is being blocked by the cargo itself, he can only rely on the instructions from the lifting commander to adjust its angle and height. The 4 main chords and 16 steel columns under the steel tower were smoothly inserted into the slots of the base and the entire operation only took 3 hours from the transportation of the steel tower to the precise installation.

Bridge Seagull was first designed to provide a lifting solution for the erection of 80m and 88m steel truss beam of the Pingtan Strait Bridge, which requires a crane of more than 3,200 tonnes and a lifting height of 110m for a period of 24 months. In order to meet the lifting requirements, in early 2015, China Railway Bridge Bureau decided to invest 340 million yuan (53 million US dollars). Wuchang Shipbuilding Industry Group won the tender in building the crane vessel which took a total of 20 months to build, and it was commissioned on 9th Jan 2017 at their Qingdao facilities.

The first highway-railway structure in the Pearl River estuary, the Jinhai Avenue Bridge is 11.2 km (7 miles) long from the Jingwan Tunnel on southern Hengqin Island to the Sanzao Tunnel beneath East Airport Road (S727) in Jinwan District. The designated speed is 100 km/h (62 mph) for the dual six-lane highway and 160 km/h (99.5 mph) for the center double-track railway.

The bridge comprises east and west approach bridges, a main structure across the Modaomen Waterway, and Hezhou Island, Baiteng River, and Sanzao sections. It will form part of the Airport Urban Rail Transit Phase II and cut travel time between Jinwan and Hengqin to 10-15 minutes. Motorists will be able to reach Zhuhai (Jinwan) Airport from Gongbei in 25 minutes.

Integrated into the Zhuhai Airport Urban Rail Transit Phase II plan, the avenue bridge will later connect Zhuhai (Jinwan) Airport with the Hong Kong-Zhuhai-Macao Bridge, and is seen as a key artery for the East and West wings of Zhuhai and Hengqin’s most important outbound transit hub.