11 Worse Crane Accidents You Should Know In January/February 2021 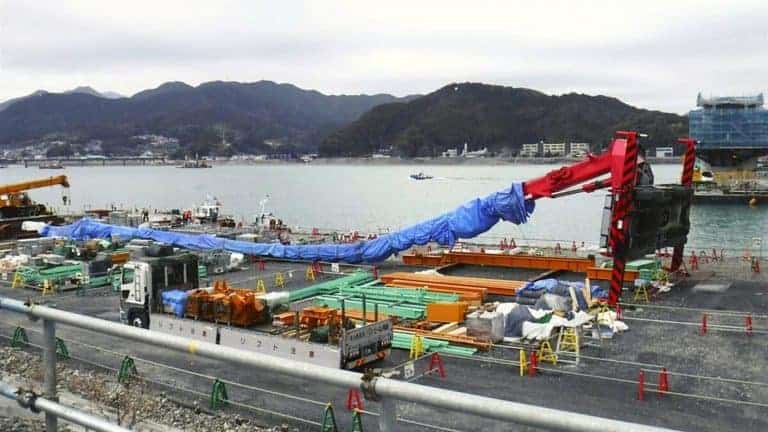 2021 has been a new year and all countries are getting recovery from the economy. As the crane industry gets busy, there are more accidents happening around the world. We will cover them here today.

19th Feb 2021 – A Terex hammerhead tower crane was to be dismantled as it was the end of the contract. However, during the jack-down process, the tower crane has slated backward which may cause possible toppling of the crane. Atlanta Fire and Rescue have evacuated 1105 West Peachtree Street for the deployment of two additional mobile cranes and crane erectors to recover it.

18th Feb 2021- A 25-tonne Franna pick & carry crane has overturned on a road near Stuarts Points – north of Port Macquarie in the morning. It was reported that the crane was traveling 55 to 65 km/h when the operator lost control and the crane ended up on its side. the crane operator has suffered a head injury and was taken to the hospital for treatment. The demised crane was owned by Mid Coast Cranes and they have sent in a Grove GMK4100L and another Franna to carry out the recovery job.

12th Feb 2021 – The tower crane is working on a high rise development in Brooklyn, New York when the luffing jib collapsed due to failed luffing mechanism. The Potain tower crane belongs to US Crane & Rigging and it was working when the incident happened. A blessing in disguise, the jib was facing away from the building and dropped along building. No injuries was reported and the riggers managed to climb down in safety. The development belongs to Brookfield Property Partners and Park Tower Group and New York’s Department of Buildings will be carrying out further investigation to find the cause of incident.

17th Feb 2021 – A Kato foundation crane lost its balance and collapsed at a construction site in Takinogawa, Kita-Ku, Tokyo. The crane leaned against an electric cable leading to a temporary loss of power to about 1,000 households. According to the Tokyo Metropolitan Police Department, no one was injured in the incident and the crane has been recovered. Cause of accident is under investigation.

30th Jan 2021 – A boom truck crane owned and operated by Gonzales Cranes overturned in Mesa, Arizona, with the boom hitting two mobile homes. It was reported that the crane was working with a 29m extended boom and lifting electrical poles before losing its stability and overturning. The crane was recovered and no one was hurt in the accident.

28th Jan 2021 – A 4-axle rough terrain crane has collapsed in the morning around 10.30 am during the construction of tthe bridge on National Route 42 at the riverbed of Kumano River in Akebono, Shingu City, Wakayama Prefecture. According to Kinki Regional Development Bureau of the Ministry of Land, Infrastructure, Transport and Tourism, the operator in his sixties was operating the crane, lifting construction materials. Investigations is ongoing to determine cause of accident.

8th Jan 2021 – Around 7.30 am in morning, the tower crane’s jib collapsed at a construction site of Hanam KJ Plaza in the commercial area of Gami-dong, Hanam-so, Gyeonggi-do. The tower crane was imported and supplied by a private importer from China with a model SM3030. The type-approval of this tower crane model was not registered in South Korea. According to witnesses, the jib collapsed after the tower crane is carrying out a test run. No one was injured in the incident.

26th Jan 2021 – The incident occurred in a golf course in Klong Luang district, Khlong Luang District, Pathum Thani Province in Thailand. It was mentioned that two Myanmar workers are being lifted in a man cage by the rough terrain crane to carry out welding of the netting for the golf driving range. However, the sling used for lifting the man cage snapped, causing both workers to fell to their death. They fell from a height of approximately 25 metres, causing multiple fractures and injuries. The crane operator fled from the scene after the accident happened.

24th Jan 2021 – A factory in the New Taipei Industrial Park has outsourced for window cleaning services in the morning. A rough terrain crane was being engaged while the cleaner are being hoisted in the man basket for carry out the cleaning. It was suspected that the crane’s boom was over extended causing the crane’s to lose its stability and tipped over. Both cleaner and crane operator has suffered minor injuries.

12th Feb 2021 – A vehicle has steered off its course into the steep slope in the Fengfeng mining area in Handan, Hebei. A truck crane was deployed immediately to carry out the recovery. While the truck crane tried to lift the vehicle, the crane lost its stability and toppled 10 over metres towards the slope. It was believed that the truck crane has reaches over the critical lifting angle resulting in the collapse. Another crane was deployed again to recover the car and the demised crane.

22nd Jan 2021 – A rough terrain crane working at a construction site near Oryu-dong Station in Guro-gu, Seoul suddenly collapsed and struck a sidewalk and roadway. The crane was in operation when the incident happened. Fortunately, no one was injured in the accident even though there are many commuters and vehicles along the stretch of the road. The luckiest person was the driver of a white car that passed the crane and in a standstill position. It has just missed the line of fire from the collapse. An investigation is ongoing and believed that one of the possibilities is that the crane’s outriggers are not fully extended whilst working due to the space constraint. Check out the video in the below link to see the footage !

Thanks for your attention and if you liked our post and there is better suggestions, do feel free to comment below !