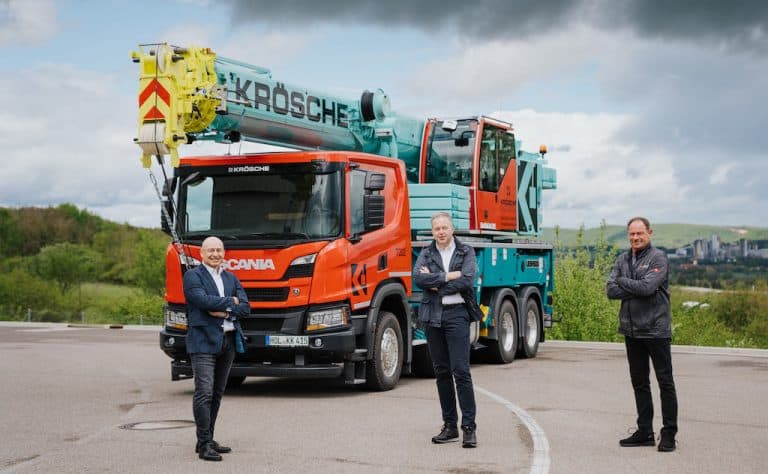 Krösche-Kran Service GmbH has established itself as a special contractor for assembling prefabricated houses. The company’s headquarters are in Holzminden, Lower Saxony and exclusively uses telescopic cranes mounted on a standard truck chassis for its work throughout Germany. Liebherr handed over the second LTF 1045-4.1 truck-mounted telescopic crane this year to Krösche-Kran in May. They will replace old cranes in the fleet.

Managing Director Joachim Ruthe explains: “For around 30 years, the Krösche-Kran fleet has consisted entirely truck-mounted cranes. The main factor for us is the flexibility of the concept as the cranes have comprehensive road permits. The LTF 1045-4.1 is the perfect example of this, because with five tonnes of ballast, its gross weight is still just 33 tonnes.”

The main areas of use for the truck-mounted crane is prefabricated house and industrial building assembly work. “Around 80 to 90 percent of all industrially manufactured prefabricated houses in Germany are assembled by Krösche. The permanent road licences provide us with flexibility in our job planning.

That enables us to run the cranes economically, which is extremely important for smaller cranes. The long-distance driver’s cabin of the truck chassis gives the crane driver the possibility to spend the night there. That means that we save on the administrative work for booking hotels as they travel the length and breadth of Germany”, says Ruthe.

Truck-mounted telescopic cranes are economical alternatives in the taxi crane class for crane contractors who often cover long distances as a standard truck consumes less fuel than a similar all terrain crane due to its design. Using a standard truck as the crane chassis also means lower costs for tyres and other wearing parts as they are mass produced.

The LTF 1045-4.1 crane attains hook heights of up to 44 metres and radii of up to 42 metres with its 35 metre telescopic boom and folding jib. With its maximum ballast of nine tonnes, the gross weight of the 45 tonne crane is just 38 tonnes. The axle loads on the front axles are less than nine tonnes and less than ten tonnes on the rear axles.

Krösche-Kran Service GmbH has been a Liebherr customer for almost 40 years and has made a major contribution to the development current LTF series. The company is also the biggest customer for Liebherr LTF cranes – over the last 15 years, it has expanded its fleet to around 60 cranes with lifting capacities ranging between 35 and 60 tonnes.

Krösche first opened for business in 1899 as a forge. Today, the company has a 55-strong workforce and is the leading crane specialist for prefabricated construction assembly work, completing around 15,000 houses per year throughout Germany. In addition to its headquarters in Holzminden, the company currently has 30 additional mobile crane sites all over Germany. Krösche currently has 30 active cranes, with two-thirds of them being LTF 1045-4.1 models.