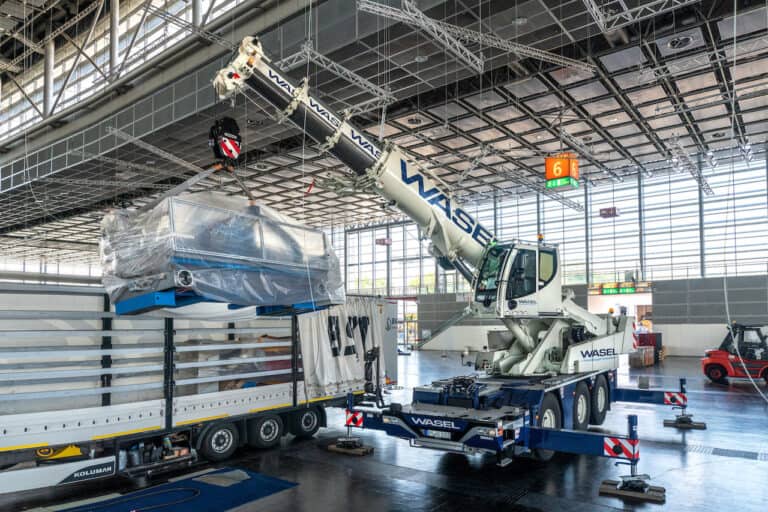 Liebherr also offers its LTC 1050-3.1 compact crane in a boom variant with rapid rope pull technology. This provides an alternative to the variant with the conventional TELEMATIK fast-cycle telescoping system, which is ideally suited, among other things, for use in narrow or low production or exhibition halls. The boom can be telescoped to a length of 31 metres. Wasel, a crane and heavy load company based in Bergheim near Cologne, has acquired three of these new single-cab cranes.

“Especially indoors, the crane is really perfect.” This assessment comes from someone who should know: Crane driver Steffen Wolf has been sitting on one of the three new LTC 1050-3.1 models with rope pull technology that the company ordered from the  Liebherr factory in Ehingen for the Düsseldorf branch of Wasel for a few months now. The expert crane driver set up and dismantled the heavy components of a machinery fair in the Ruhr area with his brand new 3-axle model and two other colleagues on the same type of crane. Exhibits or plant components weighing up to 17 tonnes had to be moved or loaded.

Even when setting up the exhibits, the men were on site for almost a week to fill the exhibition stands with the exhibitors’ heavy equipment in a very tight space. “We didn’t have much space. We were only able to drive through the often narrow alleys to the operation sites and work there because of the compact design of the crane,” adds Marino Castellini. “The individual support of the crane with  VarioBase® was almost always necessary in the process.” He has also been working with one of Wasel’s new rope pull LTCs for six months.

With its slim width of 2.55 metres, the LTC 1050-3.1 can get through almost anywhere. After all, there are heavy loads to lift even in the farthest corners of the exhibition halls. Its fast and flexible readiness for use, as well as the possibility of telescoping large crates of material or heavier exhibits to large radii,  make the crane an ideal and efficient helper for the varied handling work in exhibition construction. The liftable crane cab also plays a particularly important role. Large scaffolding with lighting systems hanging from the hall ceilings and other height-limiting fixtures demand the utmost attention and precision from the crane drivers when moving the loads. Here, the control cab of the LTC 1050-3.1 – which can be telescoped to a height of over seven metres – ensures a high level of safety. Whether loading onto large trucks or manoeuvring the pulley head close to obstacles and interfering edges – the best view of what is happening is always guaranteed.

The flexible compact crane with a strong telescopic boom from Liebherr is made for jobs in such confined environments on the ground and in the room. “No other crane comes close,” praises Steffen Wolf. “I  really enjoy working with it here. Wolf often raised his liftable cab in the exhibition halls, sometimes tilting it forward as well. “The work can be done more safely and often faster as a result. Even the trucks don’t necessarily have to open the side tarpaulins anymore because I can see what’s happening from above when I’m loading,” he explains. People are often surprised at how little space the LTC 1050-3.1 takes up.  When recently used for a roofer, it was eyed sceptically because when the crane was set up, everyone thought that there was not enough space there for the slewing operation. “But when I lifted the cab  steeply upwards, slewing through was possible without any problems.”

Thanks to its compact design, Wasel also regularly uses its LTC 1050-3.1 in the confined spaces of refineries. “Its erection jibs make the machine an ideal tool in the chemical industry and for industrial assemblies,” explains Julian Schmidt, Head of Heavy Load Logistics at the large transport and crane service provider. “In addition to the three units with the rope extension, we have another five LTC 1050- 3.1 units with conventional TELEMATIK booms in our fleet.”