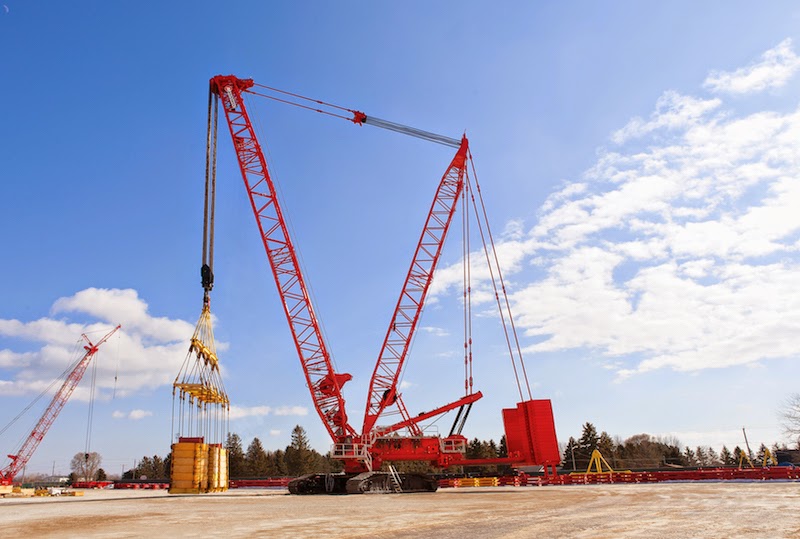 The VPC-MAX attachment for the MLC650 raises the crane’s capacity to 700 tonnes (770 US tonnes), an increase of 50 tonnes (55 US tonnes) over its standard configuration. The VPC-MAX attachment includes additional counterweight and a beam that automatically extends the counterweight beyond the rear of the crane based on lifted load, increasing its load moment. For the max load test, the crane was positioned to apply the maximum stresses through the structure, including the boom positioned over the corner of the crawler crane.

Dustin Soerens, marketing manager for the lattice-boom cranes at Manitowoc, said the testing went according to plan and the company’s engineers couldn’t have been happier with the results.

“We attached hundreds of strain guages to the MLC650 and picked a number of loads in the test yard to test it capacity with the VPC-MAX attachment,” he said. “The testing went very well with no surprises. No changes are needed on the crane, as it performed superbly. We’re well on our way to releasing this innovative crane to the global market.”

The VPC-MAX attachment provides capacities similar to wagon- or tray- mounted attachments, but requires fewer components and assembly steps, reducing setup tie and transportation cost. Also, job sites will require less ground prep, resulting in additional savings, as customers do not have to buy, transport or install as much matting when compared with a traditional configuration.

“The successful testing was a great moment for everyone at Manitowoc,” Soerens said. “We’re working very hard to release a crane that will define the next generation of lifting equipment.”