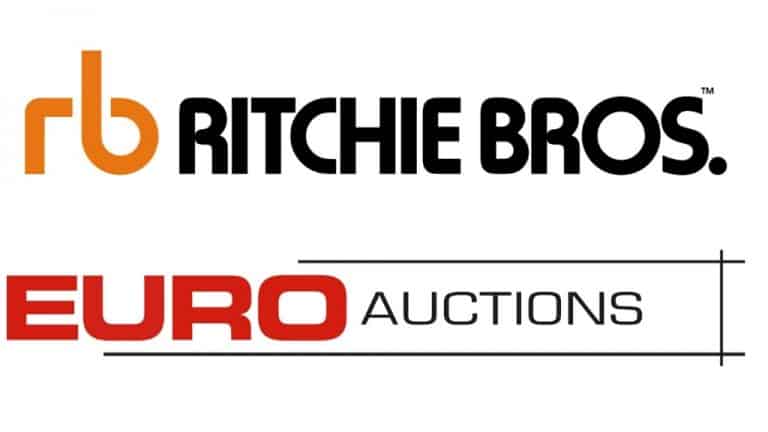 Equipment auctioneer Ritchie Bros is to acquire Euro Auctions in an all-share purchase deal that values the company at £775 million – just over $1 billion.

Euro Auctions was founded in Dromore, Northern Ireland, in 1998 by Derek Keys and his brothers and merged with Yoder & Frey in 2017. It remains a family run business with all the brothers involved in its running.

It is very similar to Ritchie in many ways, in that it organises unreserved heavy equipment auctions with onsite and online bidding under the Euro Auctions and Yoder & Frey brands, with around 200 employees across 14 countries.

In 2020 the company conducted 60 auctions, selling close to 90,000 items for £484 million across its nine locations in the UK, Northern Ireland, Germany, Spain, the UAE, Australia, and the USA.

Ritchie says it will retain the Euro Auctions brand and employees including founder and chief executive Derek Keys, who is contracted to remain on board for at least three years post-closing. It is intended that Jonnie Keys will assume a senior management position, while Lynden and Trevor Keys will be retained as sourcing leads.

Ritchie expects the acquisition will expand its overall footprint and access to equipment, whilst tapping into new revenue streams by offering its other services, such as inventory management, data solutions, financing, warranty, insurance, inspections, refurbishing and shipping to Euro Auctions customers.

The deal is an all-cash deal that Ritchie Bros will fund with cash in hand and new debt in the form of a bridging loan.

Ritchie Bros chief executive Ann Fandozzi said: “Ritchie Bros. and Euro Auctions are an ideal fit with a united goal to make asset insights, service offerings and disposition solutions easier than ever. Euro Auctions has an incredibly talented team, with expertise in asset sourcing, auction operations, sales, and customer service. Their “can do” attitude and entrepreneurial spirit combined with technology have helped them adapt and grow, in much the same way as we have.

This acquisition significantly accelerates our strategy to drive revenue and earnings growth and add shareholder value by continuing to expand our capabilities in new channels, sectors, regions, and customer segments.”

Euro Auctions Founder and director Derek Keys added: “Dave Ritchie and his brothers were a big inspiration for my brothers and me in the creation of Euro Auctions. We modelled much of what we do off Dave’s customer-centric philosophy, which still runs through Ritchie Bros. today. Bringing us together will drive value for customers, as we provide more equipment, solutions, and services to the many industries and regions in which we operate.”

Another big step by Ritchie Brothers is to continue capitalizing on the auction markets. We have seen a mega-deal in 2016 in which they have acquired Iron Planet for an estimated $780 million. This deal will further strengthen Ritchie Brothers position in the market.