Sleipnir set a pair of new records in Norwegian waters 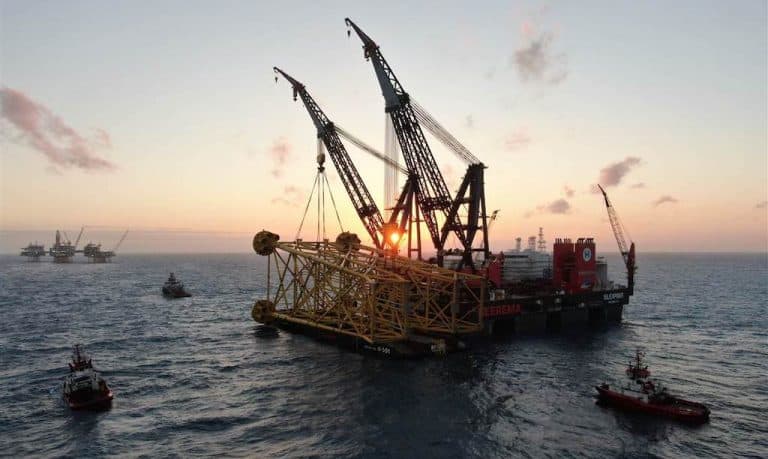 Heavy lift vessel Sleipnir has yet to set a pair of new records in Norwegian waters in May and June.

Most recently, on 18th June, the vessel set a new weight record of 12,050 tonnes for the installation of the jacket (legs) for an offshore oil platform. It was part of the Norwegian Johan Sverdrup Phase 2 development project which will comprises of five new platforms. Vessel owner Heerema claimed that it is the world’s heaviest jacket installation.

Sleipnir set another record earlier in May for the inshore integration of three P2 topside modules for offshore services specialist Aibel. One of them, the MSF module, weighed 13,600 tonnese and its lift was claimed as the heaviest by a crane in Norwegian waters.

Although there is another two modules, weighing a mere 5,400 and 4,300 tonnes, both presented a less of a challenge for the 20,000 tonne combined lifting capacity of the two lattice boom cranes on Sleipnir.

“We are proud to play a part in Equinor’s Johan Sverdrup P2 development, and to achieve two new lifting records in the process is always special. Both projects were successful due to the close co-operation with our clients, and we look forward to returning to the Johan Sverdrup field later this year.”

In May 2019, Norwegian authorities gave the formal approval to the second phase of the development of the giant Johan Sverdrup, third largest oil field in the North Sea. Construction of the field fifth platform is beginning in Haugesund.

The new processing platform, which will be the second of its kind at the field centre, will make for a total of five platforms when the development is completed.

When the Phase 2 comes into operation in 2022, production capacity is expected to increase to 720,000 barrels per day, while tthe 2nd processing platform will also provide space for an onshore electrical power inverter.

Although Johan Sverdrup is already powered from shore, but in 2022, the field is expected to distribute power to other platforms at Utsira High, including Edvard Grieg, Ivar Aasen and Gina Krog.

Previous project milestones can be found at equinor’s website.