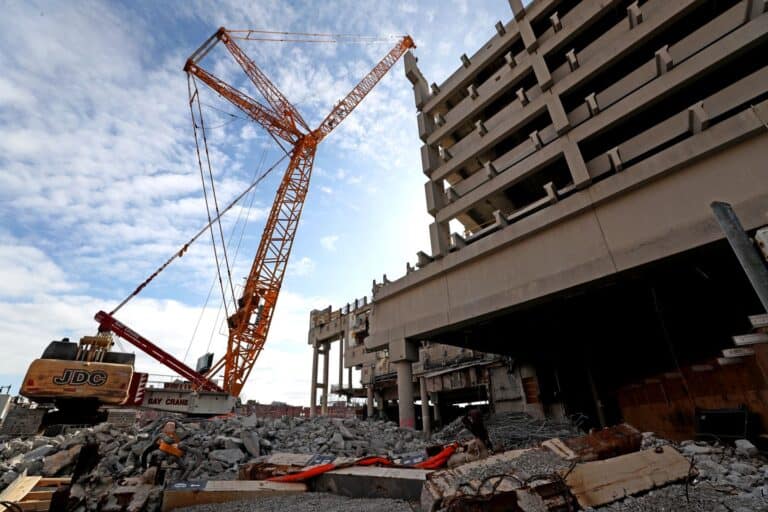 Crews told WCVB that a crane had collapsed on top of the Government Center building garage on 26th March, which was being demolished at the time of the incident.

A construction worker has died in Boston after the small crane he was in caused a portion of a parking garage to collapse near the Government Center building.

The victim, who has not been identified, was operating the machinery Saturday evening when it fell nine stories to the ground below, Boston Fire Chief Jack Dempsey said in a press conference.

The department confirmed the “partial building collapse at 1 Congress St.” in a tweet posted just after 6:15 p.m. local time on Saturday.

Upon arrival, first responders discovered the partial collapse and the victim at the bottom of the rubble, Dempsey said. The victim was pronounced dead at the scene by Boston EMS.

Massachusetts officials are now waiting for engineers to clear the area before they can safely remove the body from the scene. The garage in question was being demolished at the time of the incident, according to the Massachusetts Bay Transportation Authority (MBTA).

A reporter for WCVB reported witnessing “multiple floors come down” shortly before 6 p.m. Video of the accident from WCVB shows a tall yellow crane standing near the Brutalist-style building. The clip also shows where a portion of the roof is now missing.

WCVB shared other photos from the scene obtained from a neighbour that shows a portion of the crane lying in a pile of rubble. Emergency vehicles can be seen parked nearby in another shot.

The Boston Police Department confirmed in a tweet that “vehicular and pedestrian traffic will be impacted in the surrounding areas” following the accident.

Mayor Michelle Wu said she is devastated by the “horrible tragedy” and extended her condolences to the family and loved ones of the worker who died.

“This is a very complex site and we know that the workers who take on the risks of this should never have to worry about, their families should never worry about, whether they’re going home at night,” said Wu, adding that she is “very, very grateful for all of the agencies that acted right away.”

Boston Fire Captain Kelley McCormick said, “a major area of the city” has been “quarantined” until the safety of the building can be determined. McCormick warned of “a serious traffic disruption” until then.

Additionally, MBTA inspectors are coming in to assess the safety of the tunnel that runs beneath the garage.

“The Orange Line runs right underneath us, and that’s impacted. It’s right underneath that site, so just for safety reasons, we want to make sure the tunnel underneath wasn’t damaged from the weight of all the collapsing material,” McCormick noted.

Boston officials are working with the Occupational Safety and Health Administration (OSHA) as they investigate the crash, per the fire captain.

The MBTA previously announced that Orange Line and Green Line trains were scheduled to avoid the tunnels beneath the garage this weekend as crews worked to take the building down.