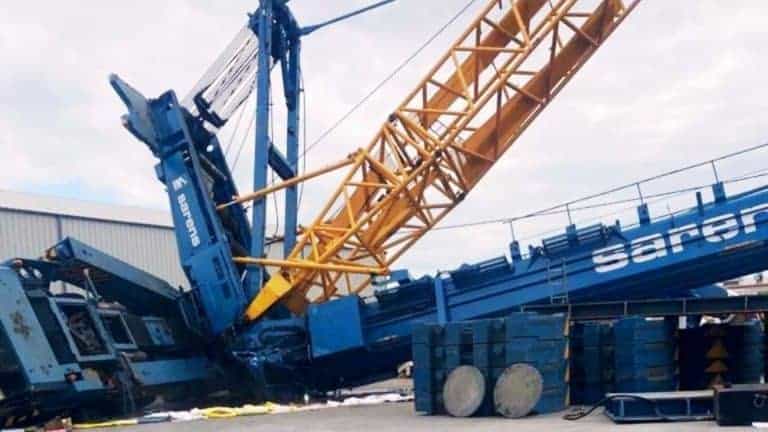 1. Container Crane Collapse Due To Ship Collision In Taiwan Port

3rd June 2021 – A container crane was brought down yesterday in the port of Kaohsiung, Taiwan, as a result of a ship collision.

The incident began when the unladen OOCL Durban container ship – which measures 316 metres in length and can hold 8,540 TEU (20ft equivalent units) – pulled into the dock at Pier 66 at the port. As it passed the brand new 2,940-TEU YM Constancy docked at Pier 70 it came too close and collided.

The bigger ship scrapped along the side of the new boat, dragging it forward, and catching one of the dock’s container gantry cranes, causing it to collapse and strike the next crane along, causing serious damage.

The main boom of the LTM11000D crashes down onto the cabin of the all-terrain crane while the derrick mast crashed into the harbour mobile crane.

So far there aren’t any further updates on the recovery of the cranes at the moment.

12th June 2021 – A fatal crane accident happened in Göttingen, Germany when a self-erecting collapsed, killing one construction worker and leaving another in serious injury.

The self-erecting crane was being used to build a small apartment block in the Esebeck district when it smashed the ceiling and the construction workers fell and were buried in the debris. One man was presumed dead immediately at the scene while another was trapped and seriously injured.

4. Rough Terrain Collapsed and killing one in South Korea

24th May 2021 – A 25-tonne roughter working at a factory building in Yongdu-ri, Gongdo-eup, Anseong-si, Gyeonggi-do, South Korea has tipped forward at 2.30 pm in the afternoon. killing one worker in his 60s.

The other four workers have suffered broken legs, fingers and forehead while the crane operator suffered a chest injury.

It was believed that the workers are for the movers’ company and they are moving the 3-tonne mechanical equipment into the 3rd storey of the factory when the crane suddenly tipped over and falls forward.

14th June 2021 – The SkyTrak telehandlers were apparently lifting a barge between them using canvas strap type slings looped around the boom. They were lowering it into the river when one of them lost stability, tipping forward and passing the bulk of the load to the other telehandler, causing both to overturn.

The incident occurred on the first day of construction after the crew had already managing to lower a barge in the river to serve as a construction platform. The second tandem lift however did not go quite as smoothly. Traverse City fire chief Jim Tuller confirmed that both operators had managed to jump clear and that no one was hurt.

22nd June 2021 – At around 2:15 pm, at the building construction site in Kamoshida-cho, Aoba-ku, Yokohama, the building materials lifted by the crane fell and hit Mr Toshiki Yoshino (53), an office worker who was working. Mr Yoshino succumbed to his injuries and pronounced dead at the hospital.

According to the Aoba Police Station, the crane is installed on the roof of a 6-story building, and when the material was lifted to the vicinity of the roof, which is about 30 meters high, it fell. The material is made of metal, and at the time of the accident, a total of 5 pieces (a total of about 400 kg) were being lifted at the same time.

The station is investigating the cause of the accident in detail.

7. Crawler crane collapsed due to violent storm in South Louisiana

15th June 2021 – The crawler was one of the several cranes that are working on Venture Global’s Calcasieu Pass LNG facility in Cameron Parish. The crawler was rigged with a long boom and a luffing jib that is standing high with a fully elevated boom and high jib angle.

At the time, the site has reported a sudden arrival of a severe storm with high wind gusts that blow towards the crawler, resulting in the jib tilting backwards and the main boom gave way. One person was injured in the incident and treated for “non-life-threatening injuries”.

8. Liebherr crane boom dropped across the canal in Belgium

27th June 2021 – The Liebherr LR1400/2 owned by crane rental company Jean Boutique was lifting an old structure of a decommissioned steelworks in Charleroi, Belgium when the crane boom dropped suddenly.

The 400-tonne crawler crane was lifting a large conveyor bridge that was running across the canal originally used to transfer material over to the other of the facility.

2nd May 2021 – The incident occurred on Sunday morning near Billericay, Essex, when the boom lift and the crane were travelling, one behind the other, along the same track at the end of a shift.

The boom lift was travelling in front of the Doosan Long Reach RRV crane – a modified 360-degree excavator with hydraulic jib and road-rail gear – when it stopped, causing the Doosan’s jib to crash into the boom lift platform in which the operator and a controller were travelling.

The operator sustained life-changing injuries, which might result in the loss of his leg, while the controller was uninjured. The crane operator and his controller, who were both travelling in the cab of the crane, were also unharmed.

10. Steel Plate Dropped From Crane, Killing one and injured another in Chiba, Japan

29th June 2021 – Around 8:50 am at the Urayasu sales office of the iron plate wholesaler “Saito Seiichi Shoten” on Tekkodori 1 in Urayasu City, Chiba a dropped load accident has happened. The iron plate lifted by the crane dropped and two men in their 30s and 40s respectively were pinned down.

A man in his thirties was pinned down on his head and was confirmed dead at the hospital where he was transferred. A man in his 40s was injured in his face. The Urayasu station is investigating the cause of the accident in detail.

At around 7:29 am on the 22nd of June, on a road near the construction site in Ungcheon-dong, Yeosu-si, South Korea a 45-ton rough terrain crane collided with six passenger vehicles parked along the roadside

The fire department is investigating the exact cause of the accident, including a brake system problem, believing that the crane has slipped from the hillside while waiting to enter the construction site.

Another worker dies at an apartment construction site where accidents have occurred recently. The belt lifting the steel structure broke and the worker below died, and the police are investigating the exact cause of the accident.

This is the construction site of an apartment in Gwacheon Knowledge Information Town, Gyeonggi-do.

At around 11:20 am on the 25th of June, a 51-year-old man who was involved in the tower crane installation work was struck and killed by a 1.5-tonne A-frame. The A-frame was being lifted from the ground and suddenly the lifting belts snapped and hit Mr Jang who was below the load.

There have been 4 fatal accidents at the construction site constructed by Taeyoung Construction this year alone. Of these, three occurred here in Gwacheon Knowledge Information Town. Jang, who died this time, is a representative of a company in charge of crane installation and dismantling, and it was identified that he worked as a crane installation team leader at the site.