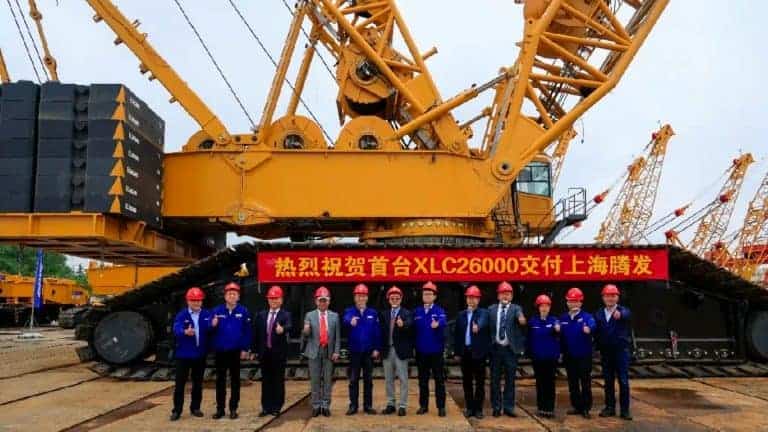 16th May 2021 – XCMG has successfully handed over the first XLC26000 crawler crane to Shanghai Tengfa Construction Company Engineering Co., Ltd at XCMG crawler crane production base. At the same time, both parties have announced the joint R&D for a new ring crane – XTF600.

This marks another strategic cooperation between the two parties and will become another major milestone for both XCMG and Shanghai Tengfa. The new ring crane development would also open a new chapter in China’s hoisting industry history as well.

China, though has been aggressively developing larger crawler cranes to adapt to the growing market domestically, they haven’t been able to develop a heavy lifting ring crane. The idea of developing a large-scale ring crane for its industrial field has been an impossible solution for most manufacturers.

However, aware of the potential growth trend in the field of large-scale engineering hoisting, XCMG and Shanghai Tengfa decided to jointly develop and create a super crane suitable for petrochemical, nuclear power, marine and other large-scale construction engineering fields.

After the successful launch of the crane, it will hopefully fill in the gaps in China’s demand for large ring crane. This will earmark a strong expansion of China’s hoisting and crane manufacturing industry.

As this is a new crane being launched, I would not be able to find much information at the moment. Perhaps it would take a few months after XLC26000 started its maiden hoisting operation, we are able to get more information on it. Details of XTF600 has not been revealed as well.