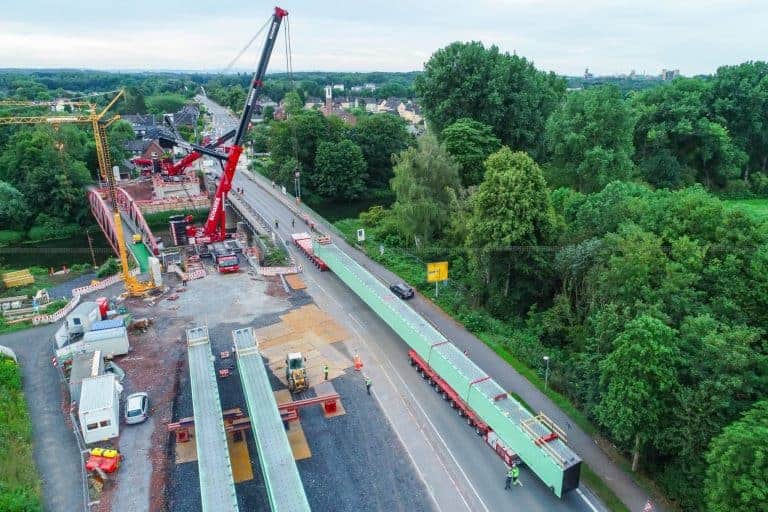 In early July, three 168-tonne, 58-metre long steel girders were installed over the River Lippe using two units of 500-tonne mobile crane. This was to replace the bridge over the river on B233 between Werne and Bergkamen in the Ruhr Area, Germany.

The existing bridge over River Lippe is over 70 years old and has suffered significant damages throughout the decades which beyond further maintenance or repair. Hence plans has been made to build a new, wider bridge directly next to it. The new bridge has been designed and engineered into three long-span steel girders, forming the basic structure of the new bridge.

Crane and heavy haulage specialist Autokrane Schares GmbH has been contracted for the works and provided the two units of Liebherr LTM1500-8.1 mobile cranes for the challenging lifting operations.

Both sides of the river have steep slopes and it poses great challenge to mobilize the mobile cranes at the site. As explained by Eric Reichmann, manager of sales, engineering and project department at Schares, concrete foundations has been casted specially for the mobile cranes’ outriggers on both sides of the river. In order to achieve better lifting capacities, both mobile cranes are engineered to lift over rear, which poses a challenge while installing its own counterweight. The mobile cranes had to lift over its carrier cab at a very large working radius to reach its counterweight from the trailers and installed onto its own superstructure. Both cranes had used its maximum 165-tonne counterweight with guyed superlift configuration.

The only way to deliver the steel girders to be lifted by the mobile cranes is to use the existing old bridge using SMPTs. Schares and his team has to calculate in advance the corresponding axle loads against the maximal load on the old bridge structure. The project planners had prepared a completed 3D CAD plan in advance to defined both transportation method and tandem lifting operation.

The steel girders were jacked up from the storage site and transported to the existing old bridge using SPMTs. It is a synchronised movement between the SPMTs and the mobile cranes such that the steel girders has to be lifted by the cranes during its movement to relieve the axle loads acting on the existing old bridge. The axle pressures of the SPMTs were closely monitored and documented, which at the same time cameras directing at the screens of the mobile cranes’ load moment indicator are also being monitored constantly.

One of the Liebherr LTM1500-8.1 has to derrick its main boom down to a radius of 34 metres to assist in carrying partial load of the steel girders on one side while the SPMTs move across the bridge. The synchronised movement continues until both 500-tonne mobile cranes lifted 84 tonnes each at a 16m radius and swing carefully to position the steel girders on the temporary abutments in a tandem lift.

The entire operation was carried out so smoothly that it was possible to open the existing bridge earlier than scheduled. The new bridge will shortly be given a temporary road surfacing which traffic will flow whilst the old bridge is being demolished. The works are expected to be completed by the end of 2021.

It has certainly being critical lifting with such heavy steel girders to travel over the old bridge. Luckily, with the expertise and experience from Schares, it is possible that the lifting operations are carried out smoothly without any hiccups. The precision in movement for the SPMTs and mobile cranes are well coordinated to make this possible. Given the space constraint, it is almost impossible to mobilize a large crawler crane for a single lift at the site which requires extensive space making.

Products That Appear in this article