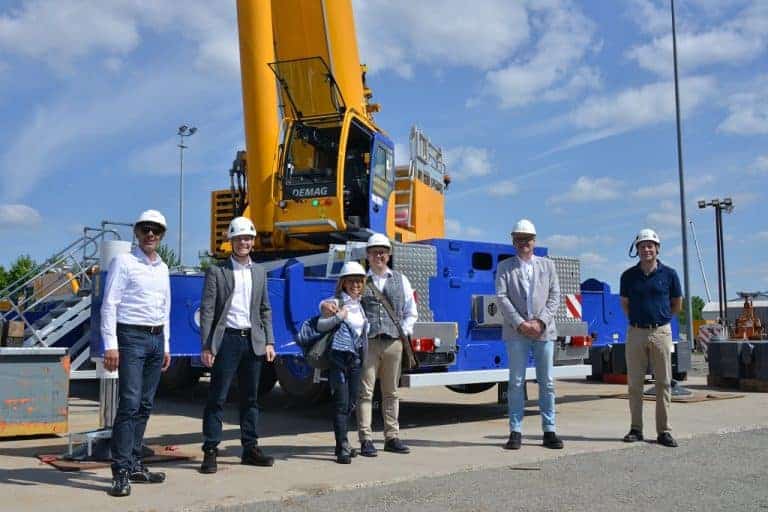 The design behind the brand new Demag® AC 450‑7 all terrain crane had won Thomas Wiesbauer over right away – so much so, in fact, that he wanted to have the very first unit of the model without fail. Ensuring that no one would be able to get ahead of him, he signed a “letter of intent” on a napkin all the way back in September 2019. Then, on May 27 of this year, he executed the official purchase agreement.

This second signature took place in Zweibrücken, in the presence of his wife Sabine and following a meeting with Tadano Demag CEO Jens Ennen, Sales Manager Michael Zieger, Product Management Director Frank Schröder, and Concept Design Senior Manager Matthias Roth. During the conversation, all the technical details behind the Demag AC 450‑7 were discussed again, after which the group got to take a close look at a prototype together with Project Manager Jürgen Schröder. “And what was quite clear was that the AC 450‑7 didn’t just look good on paper, but in real life too,” Thomas Wiesbauer found.

The new AC 450‑7 does have a lot to offer. After all, the crane is a significantly more powerful option than existing six-axle units. And despite its additional axle, it still fits in the six-axle class in terms of its dimensions, having a carrier length of only 15.99 meters, an outrigger base of 8.49 meters, and a total length of 17.62 meters. On top of this, it offers significantly better performance, matching that of eight-axle cranes in many areas. Additional highlights include a powerful 80-meter boom; a patented luffing jib rigging system for particularly easy, fast, and safe setup; and a new SSL in which the Superlift arms are mounted right at the front of the head, meaning that they are ultimately longer and provide larger lifting capacities. And while on the subject of lifting capacities, this means that the AC 450‑7 is considerably superior to other seven-axle cranes – in a number of boom positions it even leaves some eight-axle units behind.

This convinced Thomas Wiesbauer: “The 450-7 fills a niche that has not been served yet.” His signature on the purchase agreement was a done deal as far as he was concerned. And he also happily confesses that he can barely wait for the crane to be delivered next year – and his family feels the same: His brother Jochen, his son Florian, his daughter Sissi, and his wife are all looking forward to the new crane as much as he is.

No Affected by Tadano Demag fiiling

The fact that Tadano Demag has filed for protective shield proceedings in the meantime changes nothing from his perspective: “We think that it was the right decision and the best possible option under the circumstances. And this, of course, means that our partnership with Tadano Demag remains as important as ever,” he emphasizes. In the past few years, his company has acquired remarkably innovative, reliable, and valuable products from both Zweibrücken and Lauf. He is confident that this will continue and that Tadano Demag will be able to do everything it takes under the protective shield proceedings to make it happen.

There are still a few more visits to Zweibrücken on the schedule before the highly anticipated delivery: Wiesbauer employees are invited to all important milestones so that they can discuss the progress with the Demag team. Needless to say, they will also be providing input throughout the entire process – after all, one of the proven best practices followed by Demag is to drive development and progress in crane design and manufacturing by talking with their customers and generating improvement ideas together.