First Potain MCH 175A in Melbourne 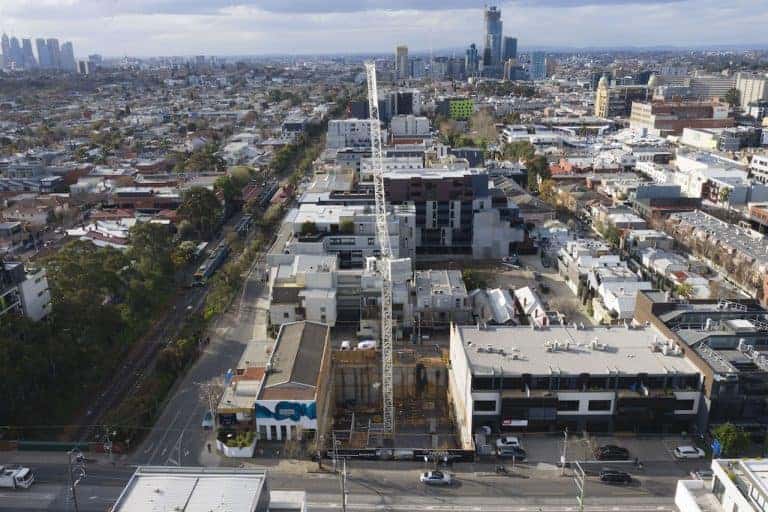 The Potain MCH 175A topless luffing jib crane is the first in Australia and was immediately set to work on a new residential development in the fashionable Melbourne district of Prahan. Several of the crane’s unique features made it a perfect choice for this congested urban job site.

The fashionable Melbourne suburb of Prahan is known for its stylish bars, eateries, late-night clubs and more, making it one of the most popular locations in the Victorian state capital. But one thing it doesn’t have a lot of is space, with this long-time hot spot packed with hip cafes, specialty boutiques and the legendary music store, Greville Records.

So when contractor Ironside approached Clark Cranes to select a tower crane for the Marque multi-story residential project in the district, getting the crane up in the air and keeping it from overswinging surrounding developments were two of the first talking points.

“When we saw how limited the space was and the close proximity of the adjoining buildings on the Marque project, we knew the MCH 175A was the best option for Ironside,” said Michael Clark, director, Clark Cranes. “This is actually our first Potain crane and we bought it precisely for this type of project, so it’s a perfect fit. I even went to the Manitowoc factory in Zhangjiagang, China, to look at the facility before we made the investment, and I was very impressed with what I saw. The build and the quality of the crane are excellent.”

On the Marque residential development, the MCH 175A worked with a 30 m jib and was originally erected at a 38.9 m working height in the building’s lift shaft. The telescoping cage was installed and then the crane was raised by two masts to a final height of 44.9 m. The space was anchored at 22.4 m above the base inside the lift shaft, which allowed the telescoping cage to be removed and the crane completed the project at this height. It handled a variety of materials during construction, including formwork, rebar and precast sections and was dismantled in April of this year as the project entered its final stages.

“On the Marque project, the crane’s fixed counterweights and counterjib allowed it to be erected at a lower height,” he said. “Other cranes might have a pivoting counterjib meaning on these types of projects they have to be assembled at a greater height which adds time and expense and causes headaches for the contractor in terms of managing clearance. Also, the reduced parking radius of the MCH 175A when not in use ensured there was no encroachment over adjoining buildings.”

The MCH 175A has a maximum capacity of 10 t; maximum radius of 55 m; and maximum tip capacity of 1.5 t. One of the MCH 175A’s standout features is its VVH hydraulic luffing technology for raising and lowering the jib. This innovative feature moves the jib from horizontal to 87° in less than two minutes, for faster work on site. The design also eliminates the need for luffing ropes, which saves on assembly time.

To further reduce on-site assembly time, the crane’s hydraulics are pre-connected at the factory, allowing contractors to get to work faster, while the unique hydraulic cylinder that powers the luffing motion offers lower energy consumption than conventional luffing jib cranes. This means it requires a smaller generator, lowering costs for owners.

The Marque project is one of a number of projects that contractor Ironside is managing in and around the Melbourne area. This nine-story building will consist of 43 apartments, one floor of office space and two retail spaces when it opens in September 2020.

Clark Cranes is one of the leading tower crane rental companies in Melbourne, with over 30 years of industry experience. It also has a sister company, Associated Cranes, which specializes in mobile crane rental and which operates two Grove all-terrain cranes, a GMK5220 and a GMK5130-1.