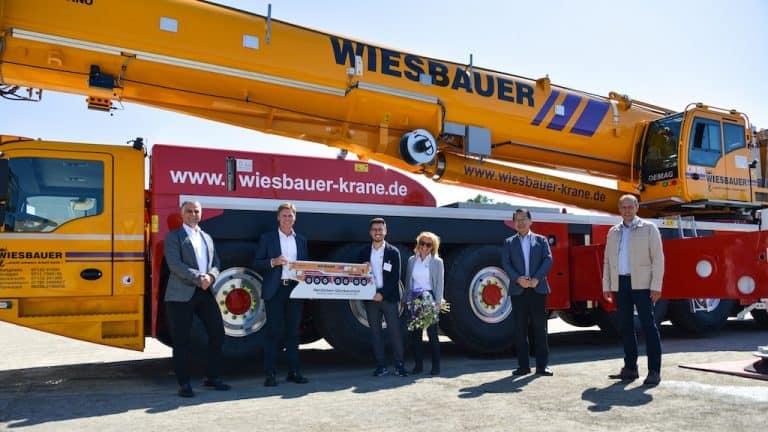 The best way to determine just how important this crane handover was to Tadano in Zweibrücken is to look at who was there for it: Wiesbauer was represented on-site by Junior Manager Florian Wiesbauer and Sabine Wiesbauer from the Wiesbauer management team, while Tadano was represented by Sales Manager Michael Zieger, Vice President Tadano All Terrain Product Line Dr. Frank Schröder, Vice President Production Dr. Jan Wieser, and Tadano European Holdings GmbH CEO Tadashi Suzuki.

After all, the event was nothing less than the handover of the world’s very first Tadano AC 7.450-1 all-terrain crane to a highly valued customer.

Tadashi Suzuki pointed out just how important the handover was for Tadano: “The fact that a large, renowned company like Wiesbauer decided to buy the very first model of our Tadano AC 7.450-1 and blaze the trail should get the attention of the entire industry. We’re not only proud of that, but also of our new crane per se,” he highlights.

In fact, the crane features a whole series of technical advantages that put it at the very top of its capacity class. After all, the AC 7.450-1 is a significantly more powerful option than all six-axle units that are currently available on the market: Despite its additional axle, it still fits in the six-axle class in terms of its dimensions, having a carrier length of only 15.99 meters, an outrigger base of 8.49 meters, and a total length of 17.62 meters.

On top of this, it offers significantly better performance, matching that of eight-axle cranes in many areas. Additional highlights include a powerful 80-meter boom; a patented luffing jib rigging system for particularly easy, fast, and safe setup; and a new SSL (Sideways Superlift) in which the Superlift arms are mounted right at the front of the head, meaning that they are ultimately longer and provide larger lifting capacities.

And while on the subject of lifting capacities, this means that the AC 450-7 is considerably superior to other seven-axle cranes – in fact, it even leaves some eight-axle units behind in a number of boom positions.

A napkin seals the deal

The people at Wiesbauer found these characteristics compelling as well: “To put it simply, the Tadano AC 7.450-1 fills a gap that no other manufacturer has filled to date,” explains Florian Wiesbauer. This is part of why his father, managing director Thomas Wiesbauer, wanted to get his hands on the very first model produced without fail.

In order to make sure that no one would be able to get ahead of him, he signed a “letter of intent” on a napkin all the way back in September 2019 – needless to say, this anecdote was fondly remembered during the handover, which could not have come at a more propitious time for Wiesbauer: On September 1st, 2021, the company took over the Cranes department of towing and recovery company Florian Herbold, with locations in Bad Rappenau and Bretzfeld-Schwabbach.

READ MORE:  Mobile crane collapse near IKEA in the Netherlands

This has turned Wiesbauer into the largest crane rental company in the federal state of Baden-Württemberg. “And, of course, that means we also need big cranes such as the AC 7.450-1. That’s why it’s really great to have a solid and reliable partner like Tadano on our side as we expand the business,” points out Sabine Wiesbauer before revealing that she has been following the merger between Demag and Tadano with great interest and is excited to see the benefits that will arise from this in the coming years in terms of technology and service.

Her son then proceeds to add: “We’ve already been able to notice some positive effects when working together. That’s why we look forward to stepping up our ties to our direct contact Michael Zieger, with whom we’ve worked for many years in a relationship characterized by absolute trust.”