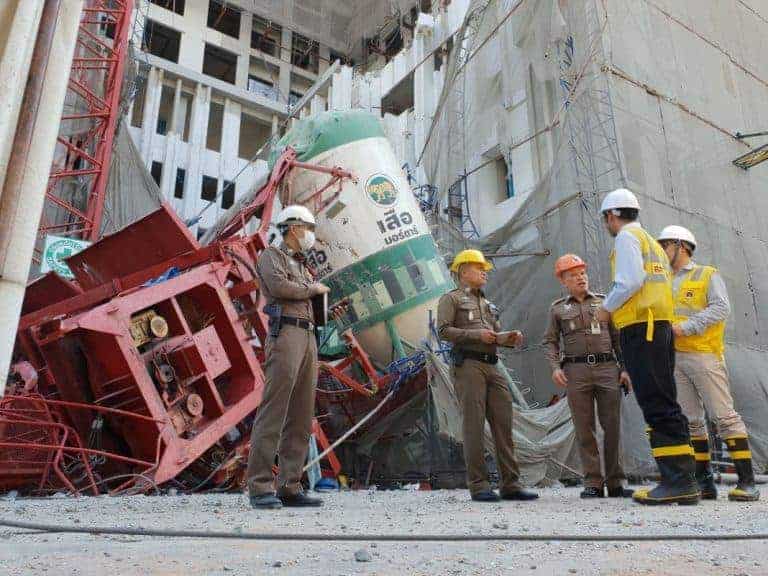 The top part of the tower crane at a condominium construction site on Rama III Road in Bangkok collapsed and lies crumpled on the ground. Four workers were confirmed killed and others injured, on Wednesday afternoon.

The accident occurred at the site of the Lumpini Place Rama 3 Riverine project at Soi 45, Rama III Road,  in Yannawa district around 1pm. The top section of the crane broke away without warning and plunged down onto workers below.

Rescue workers rushed to the scene and reported four male workers were confirmed killed and others injured and trapped on the fifth floor of the under-construction building. The injured were taken to a nearby hospital, Thai media reported.

One worker was left stranded, clinging to the top of the broken crane. A rescue was underway.

Opas Sripayak, managing director of the developer, LPN Development Plc, said the accident occurred while a subcontractor was extending the crane.

He confirmed four workers were killed. The number of injured workers was still being checked.

The accident led to a dramatic rescue operation, as one worker was trapped atop the wreckage about 50 meters above the ground. He was brought down safely but later died at the hospital due to severe blood loss, bringing the death toll to five. Five others were injured.

Sompot said police are working with engineering experts to determine the cause of the accident. He added that the developer, L.P.N. Development Public Co. Ltd., has yet to contact the authorities.

Construction site accidents and worker fatalities are commonplace and despite frequent assertions of legal action, accountability is in short supply.

Civil engineer Chulert Jitjurjun, who’s assisting the investigation, said after the site inspection that a faulty installation of the crane might have caused the collapse. He also said the crane was old and partly damaged.

The national engineering council will permanently revoke the engineers’ license if found responsible for the accident, Chulert said, adding that the collapse only had a minor impact on the building structure.

Sompot said it’s not yet known if any engineers were at the site when the accident occurred.