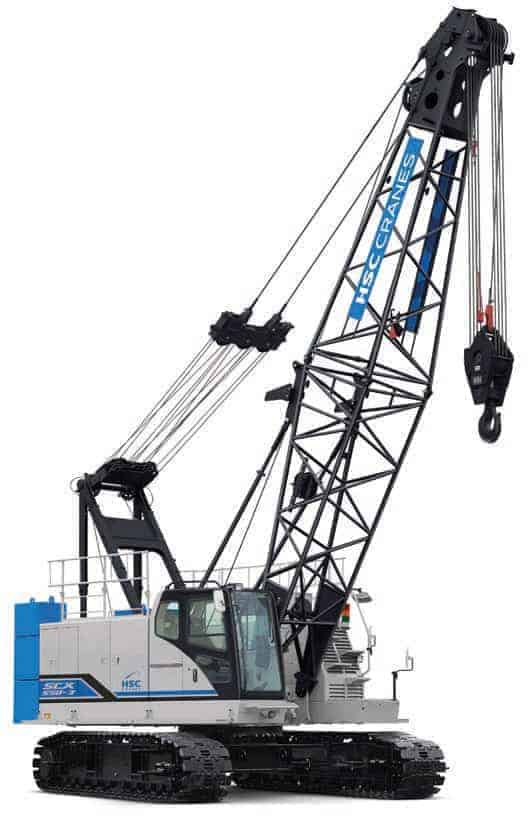 With a site area that spans 110,000sqm and a floor area of 46,000sqm, the Nagoya plant has been the centre of the company’s manufacturing line for nearly six decades.

At this facility, HSC manufactures lattice boom crawler cranes up to 350t—the higher capacity machines are manufactured at its Saijou plant, around 400km away—as well as foundation machines and the main body of seven Link-Belt models.

Changes in Scene in Nagoya

In the past year, the company has also moved the production of the E-series crawler cranes from China to Nagoya. To accommodate for the increased production, the manufacturer has recently established a new boom fabrication shop and boom painting line at the facility.

The newest model on the Nagoya plant assembly line is the SCX550-3, which was launched in Japan in July 2019. This model has a maximum capacity of 55t and a maximum boom length of 49m. In order to facilitate operation on sites with limited space, the manufacturer kept the counterweight width at 3,200mm and rear swing radius at 3,850mm.

The counterweight has a new design that allows it to be piled flat. Hanging lugs and a connect pin holder have been installed on the boom for easier transportation and assembly.

The SCX550-3 has numerous safety features including a swing restriction device, swing brake pedal, warning alarm and auto drum lock. For greater safety during maintenance, folding-type handrails are also a standard feature. The remote sensors installed to allow the machine’s operating condition to be monitored.

It is equipped with an engine that meets EU Stage IV and Stage V exhaust emission regulations.

“We have a cross-functional team comprising our design, fabrication and salespeople. Joined in one team, they make new machine plans and brush them up over time. The base is the voice of the customers.”

An example of the efficiency of this process—as well as the standardisation of certain parts—is the development of the 275t lifting capacity SCX2800A-3 hydraulic crawler crane, which was launched last year and had been developed at high speed to meet a customer’s urgent need.

The development of the 350t class SCX3500-3 had a similar story. Managing director and president of marketing, sales and customer support group Tomohiko Kurose say there was a two-year time limit to introduce the SCX3500-3, as a Japanese customer wanted to use it for the construction of an Olympic Games stadium.

The 2020 Summer Olympic Games being awarded to Tokyo, has boosted the domestic demand for cranes. “Since Tokyo was announced as the host of the Olympic Games, the market went up. In 2017–2018, the demand rose to almost 500 units.

In 2019, the demand is down because most of the projects are finishing,” Kurose says. He adds that the forecasts say that there will be a sharp decline in demand in the next few years, but he doesn’t anticipate such a significant shrinking of the market.

“Because of the time frame for the Olympic games, many contractors did not take many residential or warehouse buildings. So even after 2020, this kind of projects will remain.”

The international markets with strong demand for cranes at the moment are Indonesia and the Philippines, Kurose says. “In Indonesia, there are a lot of oil and gas projects as well as various infrastructure projects related to railways and ports.”

The company’s aim is to expand its presence in the global market. Last year, the ratio of shareholding in the company changed and it became a consolidated subsidiary of Sumitomo Heavy Industries, which has brought some changes on the commercial side.

The manufacturer still works with Hitachi Construction Machinery Europe (HCME) for sales in Europe, but as of this year, the company established its own office and formed an independent commercial team for the European market. “We now do business directly with our local dealers. In this way, we are able to get much better customer voices from the market. In some of the markets we are keeping the same dealers, like NRC in the UK and Ireland, and we are looking for distributors for countries that are not yet covered in Europe,” says Kurose.

However, for aftersales support and spare parts in the region, there is still a collaboration with Hitachi Construction Machinery Europe.

Being part of Sumitomo Heavy Industries

HSC and Link-Belt both direct subsidiaries of the same group. Despite the companies working together since the 1980s, being part of the same group has increased the collaboration between them. Kurose says that managers from both companies are having web meetings every month and visit each other’s factories two or three times a year. HSC has also dispatched one engineer to Link- Belt’s factory in Kentucky. Another area of discussion and research between the two manufacturers is a potential sharing of some components and parts for cost-reduction purposes.

“A customer in the US may have Link-Belt products as well as our products; so if both machines have the same or similar features and design concept, that would benefit the customer. We are thinking of not only the products but also specification.”

In the UK, Ireland, Indonesia and South Korea, HSC and Link-Belt have the same dealers. “We would like to study this and if it is a success, we would like to expand it to other countries,” says Kurose.

The change of ownership has come with some changes, but at HSC they are confident about the future. They can rely on the strong reputation and quality of their products as well as the wide range of cranes they offer to increase their global market share. The company continues to invest in its products, with the upcoming one being the replacement of its 200t class machine.