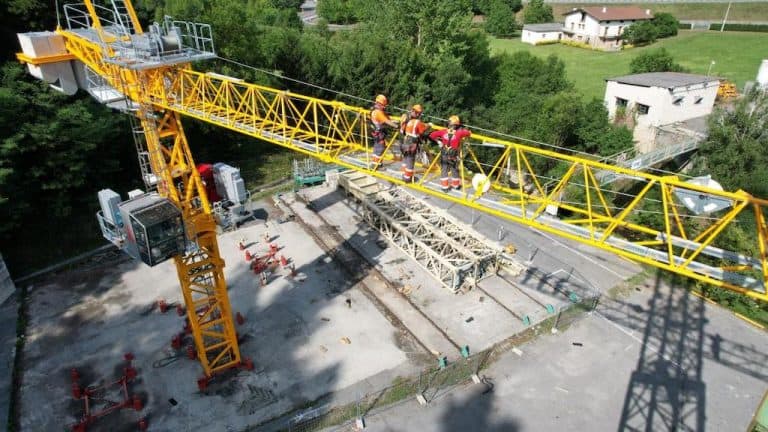 Spanish crane manufacturer Jaso is set to launch its new 18 tonnes J198HPA hydraulic luffing tower crane at Vertikal Days next week. The first five units have been ordered by UK rental company Falcon Tower Crane Services which worked closely with Jaso to develop the crane. Deliveries are scheduled to begin before the end of the year.

Similar to the Jaso J168HPA hydraulic luffer introduced in 2014, the J198HPA places the jib luffing cylinder behind the jib pivot point – so that it pulls rather than pushes the jib up. It also means that the cylinder is fully retracted when the jib is fully elevated, which the company claims is its ‘strongest position’ when left ‘out of service’. It has a maximum lifting capacity of 18 tonnes in three fall operations and a jib tip capacity of 1.6 tonnes at 55 metres. It can also handle up to 12 tonnes in a double line configuration or six tonnes in a single line configuration thanks to a special slimline hook block, which also improves the jib tip capacity to 1.8 tonnes.

The jib can be built up from 30 metres in five-metre increments to a maximum length of 55 metres, while the crane has a minimum out of service radius of eight metres. The tail swing with concrete or optional steel-framed counterweights is 8.2 metres, while a slimline steel counterweight option reduces this to 7.9 metres. A maximum free-standing height of 38.1 metres can be achieved using the company’s standard 1.75 by 1.75-metre tower system and 12, six and three-metre long sections.

For assembly, the hydraulic cylinder is pre-installed, and part of a single module which includes the slew turret/ tower head and jib pivot/foot assembly, with quick fit electrical and hydraulic connectors. The total sub-assembly weighs 12.1 tonnes, although this can be reduced to 6.8 tonnes if required. The hoist winch is also integrated into the jib which allows the crane to be left fully reeved, a job that can be completed on the ground, rather than at height. All platforms are preinstalled and foldable, as are the handrails, while the company claims access to all control cabinets and main access points can be achieved without the need for safety harnesses.

When it comes to transporting the crane, the entire upper part of the crane can be moved in three truckloads, while the maximum free-standing crane takes five loads.

Jaso claims the crane will be one of the largest hydraulic luffing cranes on the market and that it has been built in response to the growing demand for higher capacity cranes within the 200 to 350 tonne/metre range for urban projects or high rise construction in congested inner cities.

Falcon managing director Andy Brown, said: “Falcon are delighted to have worked closely with Jaso on the development and launch of the new J198HPA. With a short out of service park position, reduced Eco-mode power consumption and an 18-tonne maximum capacity, the crane will be ideally suited to the UK market. The smaller Jaso J118HPA and J168HPA have proven to be an immense success and with the increased demand for larger tower cranes, we are expecting the same for the J198HPA. Particular attention has been given to the installation to allow the crane to be transported and erected as efficiently as possible.”