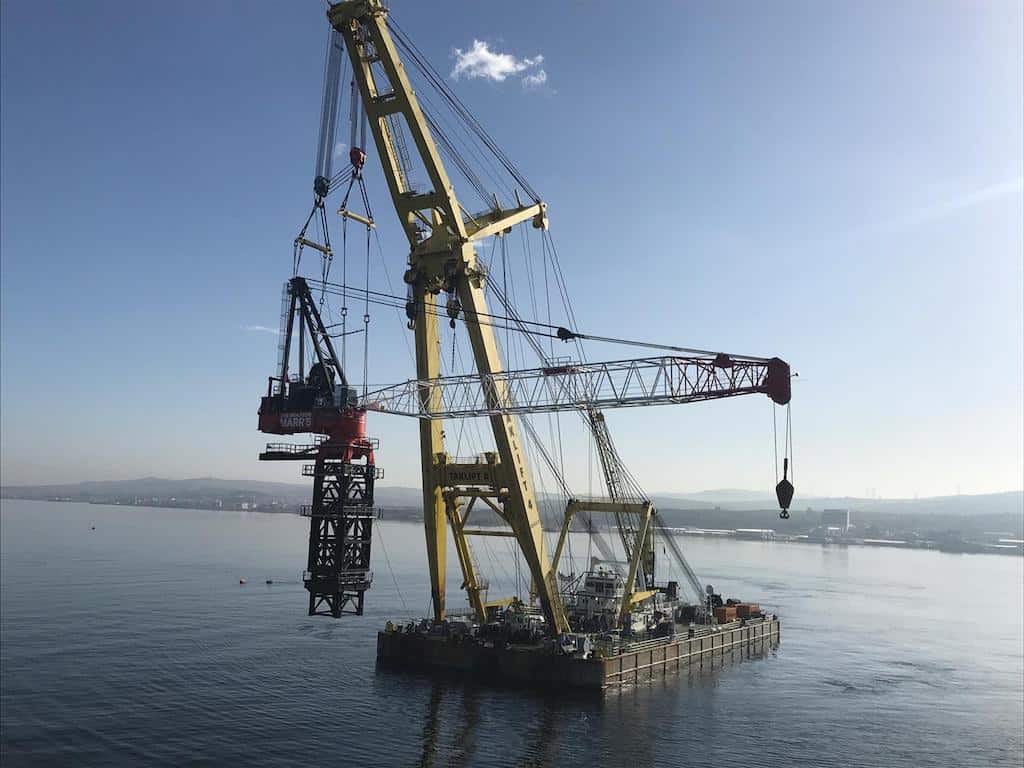 The heavy-lift luffer parts were shipped from Sydney to a dry dock at Gallipoli (Gelibolu), Turkey, where they were assembled onshore on purpose-built foundations as once completed, the cranes weighed 600 tonnes each.

On 3 November 2019, the first M2480D was lifted and transported a kilometre to the middle of the Dardenelles (Çanakkale Strait) by a Taklift 4 floating heavy lift barge crane, which has a lift capacity of 2,200 tonnes. The second crane was carried out onto the water on 8 November 2019.

The 1915 Çanakkale Bridge is due for completion in 2022 and will become the world’s longest span suspension bridge, connecting the towns of Gelibolu (Gallipoli) on the European side of Turkey with Lapseki on the Asian side. The span will be 2023 metres, surpassing the Akashi-Kaikyo Bridge in Japan which is the current record holder at 1,991 metres. The total bridge length will be 4,608 metres and it will have a tower height of 318 metres.

“The sheer lifting power of Marr Contracting’s M2480D HLL is a game-changer for this project and could forever change the way our industry looks at building bridges.”

According to Marr Contracting, the tender process was competitive and the solution of lifting the crane into position fully-assembled was a key reason it was awarded the contract. By doing it this way, Marr Contracting said, the project’s construction time and associated risk were reduced.

Marr Contracting said that its M2480D HLL cranes are revolutionising the way bridges are built by lifting heavier modularised components instead of the more traditional approach of lifting smaller components one-by-one and then welding on-site. The M2480D is the only crane in the world, it claimed, that can lift the large components that will make up the two 318 metre high bridge towers. When the M2480D lifts one of the final 165-tonne components to a height of 318 metres, it will be the world’s heaviest and highest craneage lift, Marr Contracting claimed.