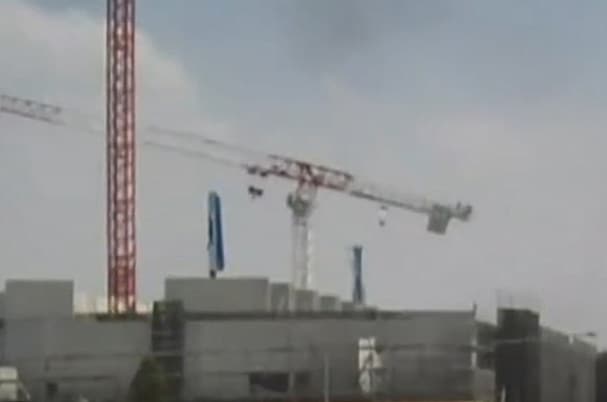 The top of a flat top tower crane – jib, cab, counter jib – broke free from its tower at a site at Smeaton Grange near Campbelltown on the southwest side of Sydney, Australia on Sunday.

It may be mistaken in the initial assumption that the Terex Comedil CTT 561 has collapsed during its erection, but the tower crane has been working on the job site since July this year. The crane collapsed was caused by the failure is of a connection pin/bolt or other failures between the tower and slew ring section. The entire crane collapse has been caught on video – you can watch it here.

How or why it failed like this when out of service and calm days is the focus of an investigation by the rental company operating the crane – Reds Global and the authorities.

Thankfully no one was injured in the incident, more to due to the fact that the site was closer than anything else.

SafeWork NSW is investigating the incident and checking similar crane models for any similar issues along with Reds Global which has issued a statement which is published in full below, followed by a full and detailed bulletin.

“Yesterday afternoon a tower crane under Reds Global’s control had partially collapsed on a construction site at Smeaton Grange. Our management team were on-site until late last night, and the team is there again today, discussing the next steps. At this stage, access to the affected areas is restricted as we establish a safe methodology to remove the crane. There are many different stakeholders working together and as such, it will likely be a lengthy process. While it is too early to determine a cause, we can confirm that the issue is limited to this model of crane and we do not manage any other units of this model.”

It has followed this up with a more comprehensive statement as follows: Reds Global has been alerted to a number of assertions regarding the collapsed tower crane at Smeaton Grange. Some of these assertions have been incorrect. Although the matter is subject to ongoing investigations, we draw your attention to the following facts:

“In order to provide further clarity, this model crane is a Terex Comedil CTT561 which has a specific connection assembly from the slew mast to the slew mount which is the point at which the crane separated. To our knowledge, there are three similar cranes in Australia manufactured by Comedil with this same connection assembly and we have reached out to the crane owners individually.”

“Reds Global does not have any other cranes with this slew mast assembly design in our fleet.”

“In the crane, the slew mast is connected to the slew mount by 8 x M39 x 592 bolts. Newer versions of this model crane, subsequently called CTT561A, replaced the vertically installed bolt connections with 4 x 90mm horizontal pins. Appendix A shows the depiction of CTT561 version (Smeaton site) and Appendix B the current CTT561A redesigned version.”

“Reds Global would like to thank all those who’ve shown support and made offers of assistance. It is very encouraging and greatly appreciated. It shows the strength of the industry, that we can pull together in times like this.”

Crane collides with a utility pole in Yokohama, Japan