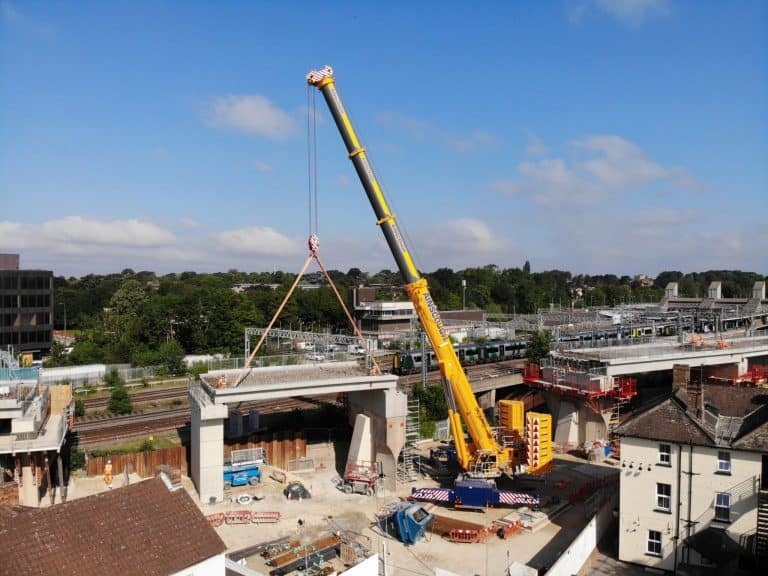 Ainscough Crane Hire was quick to put their first Liebherr LTM 1650-8.1 into its first project since the 650-tonne mobile crane arrived in the UK earlier this year.

The LTM 1650-8.1 was deployed to work on lifting precast beams on the new Bletchley Flyover, which forms part of one of the most prestigious projects in the UK infrastructure pipeline, East-West Rail Connection Stage 1.

East-West Rail will create a new direct connection between Oxford and Cambridge. Serving communities across the area, it will bring faster journey times and lower transport costs as well as easing pressure on local roads.

The East-West Rail Alliance is responsible for the delivery of Connection stage 1 between Bicester and Bletchley and is working for Network Rail on behalf of the East-West Railway Company.

Ainscough was appointed by Select Plant Hire on behalf of the East-West Rail Alliance to lift beams weighing between 10 and 32 tonnes into place. Following a site visit earlier in the week, the work took place for several hours on a Saturday night. A 10-tonne pier was also installed on a radius of 69.3m at 60m boom. James MacKenzie of Laing O’Rourke served as the appointed person for the job.

“The 650t was configured with 175t ballast on 52m main booms,” says Gareth Jones, the Ainscough crane operator who undertook the work. “It was absolutely the perfect crane for this job. The best thing about the new crane is it is better without being guyed than the LTM 1500-8.1 is when guyed.

“I can’t speak highly enough of the LTM 1650-8.1 – it’s a dream to operate and it’s already bringing huge benefits to our clients. Not only does it have significantly more lifting capacity than its predecessor, it also features a faster rigging time of only 2.5 hours, dramatically increasing the time-efficiency of a lift, meaning fuel is saved and noise is reduced.”

James Mackenzie added: “The 650t is a phenomenal bit of kit. Quick to rig, easy to rig, and very easy to plan for considering the capacity and reach of the crane.”

Along with 80m main boom and its luffing jib, the LTM 1650-8.1 can also achieve hook heights of up to 151m, and a radius of up to 112m, adding flexibility in lift planning and will give Ainscough’s project teams the ability to cope with higher wind speeds due to the wind speed capacity tables incorporated in the design.

The LTM 1650-8.1 also incorporates VarioBase®, which enables each outrigger to be extended to a different length. The increased safety and ease of use take the strain off the crane driver who can concentrate fully on the hoist. The enhanced range and lifting capacity means that the system’s capacity has also been improved.

Additionally, the integration of VarioBallast® enables the LTM 1650-8.1 to deliver maximum lifting capacities with a large ballast radius, making it perfect for use on constricted sites with a small ballast radius. This is achieved by quickly adjusting the ballast in seconds.

The new crane has a world-class engine compliant with the latest exhaust emissions regulation ‘Stage V’, which will help to support Ainscough’s clients in reaching net-zero targets. Thanks to its ECOdrive and ECOmode capabilities, the engine is designed to reduce fuel consumption as well as noise pollution and carbon emissions – resulting in both health benefits for crane operators and the local environments in which Ainscough operates.