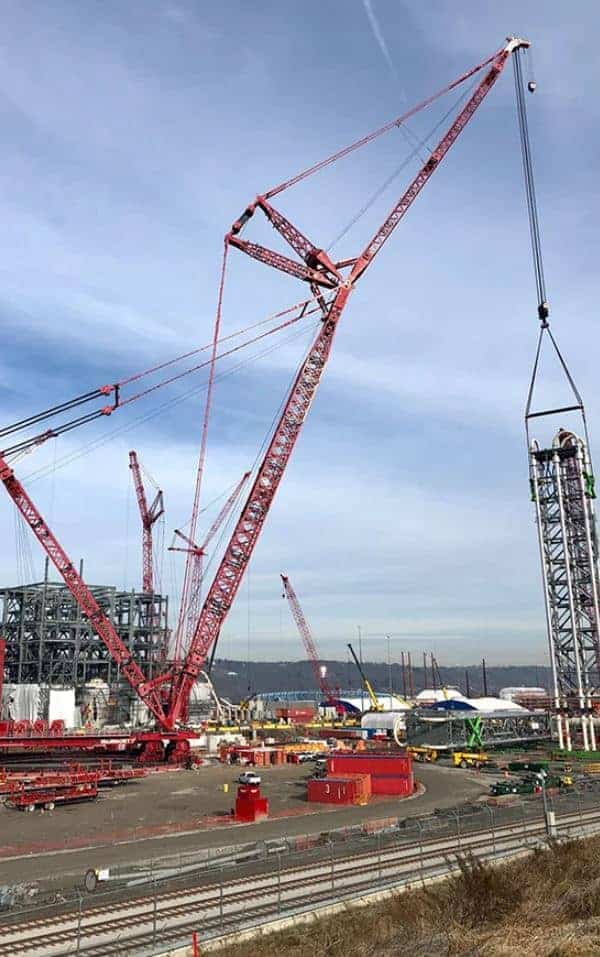 In 2019, Mammoet’s team completed several lifts using the PTC 200-DS in Potter Township, Pennsylvania. Originally there were ten scheduled lifts to be executed at a radius of 146m (480ft), with the heaviest two pieces weighing in at over 663.4t (1.4m lbs.) each.

In order to maximise construction efficiency and because of its reach and centralised location, Mammoet’s PTC was proposed as an option to complete other lifts on site as necessary. Ultimately, a further 137 lifts, not previously included in the PTC’s scope, were executed within the crane’s 205m (673ft) working radius.

By combining lifting capacity – up to 4,535t (5,000 US) tons – with its long reach and flexible configuration, Mammoet’s PTC provided an ideal solution on site. Because the counterweight is positioned on the ring, cranes such as the PTC don’t need any additional space to slew, allowing an efficient use of available space while still providing an extended lifting range.

Additionally, Mammoet’s crew set six steel pre-assemblies over existing purge bins inside the plant. These manoeuvres needed to be made approximately 91m (300ft) above ground level, with use of tag lines. By setting this steel in pre-assembled sections, the amount of work performed at elevation was greatly reduced.

A hydraulic swivel was used to help steady the load because using tag lines alone would have been infeasible for controlling the orientation of each piece. With the assistance of the remote-controlled hydraulic swivel, the pre-assemblies were able to be precisely positioned. This was a necessity due to a clearance of less than 5cm (2in) at times between the pre-assemblies and the purge bins.

The facility is the first major U.S. project of its kind to be built outside of the Gulf Coast region in 20 years. Once operational, the complex will include four processing units, including an ethane cracker and three polyethylene units and is expected to employ up to 600 workers. In early 2019, Mammoet’s MSG80 successfully lifted a 1,814t (2,000 US ton) quench tower into position, which was the tallest and heaviest lift scheduled at this location.

READ MORE:  8 Worse Crane Accidents You Should Know In July/August 2021